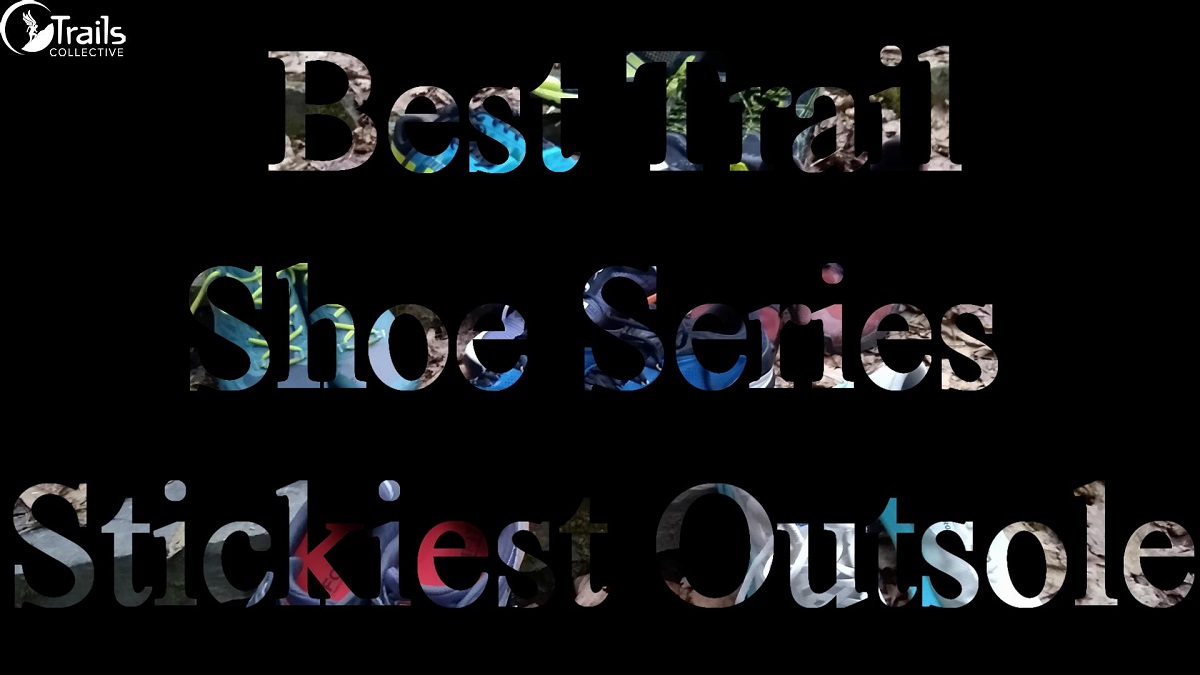 Running shoe company claims and names for outsole rubber, particularly for trail models, have always entertained me. So to have social media threads where runners weigh in on the question of the best outsole traction. Here in the Finger Lakes of New York, our trails are laced with slick rock, greasy mud, and slimy wood. As witnessed in this clip while testing the Mad River Tr, Saucony’s PWRTRAC outsole rubber offered about as much traction as Clark Griswold’s saucer sled. I’ve learned to question the veracity of any company’s claims for superior or best traction.

Our terra is unique. A few hours north in the Adirondacks, east in the Catskills & Hudson Valley, or south in rugged PA, and I’d find rock that near any rubber would grab just fine. I’ve spent time living and running in the high desert of the Northwest, and the dry desert of the Southwest. Hawaii where rain would pass over the island near daily, keeping the trails perpetually wet underfoot. In all those areas you stand a better chance of sticking, and, feeling that the rubber on your trail shoes is quite exceptional. Our creek beds, with near frictionless rock, are the perfect stage to separate catchy trademarks from actually superior rubber compounds.

In late December 2020, I was spending a bit of time testing the Asics FujiTrabucco Lyte. Given this bewildering ad was the last association I had with Asics’ attempt at trail, I didn’t have high hopes for the model. The outsole rubber proved hard, so much so that it would gash my ankle bones with contact. But, quite surprisingly, its stickiness felt remarkably solid. Given the bias I held against Asics, I questioned what I was feeling. I wondered whether it was just a different day and conditions, that rocks and roots simply had less slick film in winter. To challenge my own biases, I made a plan to test the outsole rubber of most of the top brands. Outsole to outsole. Same day, same condition. A slick creek rock elimination match to determine which outsole rubber blend truly offered the best grip.

PWRTRAC from Saucony on the Mad River TR2

The Saucony Mad River TR 2 is a soft, smooth running versatile trail shoe. Its multi-directional lugs grip over variable surfaces. It’s built with increased width in the toebox and midfoot versus traditional Saucony models. It has a 4mm drop and retails for $110. Its predecessor, the TR v1 was one of Ian’s favorite shoes of 2019. With many of the same properties carrying over, you can check out that review here.

TrailTack from Brooks on the Catamount

The Brooks Catamount offers a plush, bouncy midsole on top of a minimal upper and hybrid outsole. The shoe is built to run long over only mildly technical terrain. It has a 6mm drop and retails for $160. You can check out the Trails Collective preview of the Catamount here. It continues to be a go-to shoe for Ian over non-technical trails and sloppy winter road running.

XS Trek Evo from Vibram on the Topo Ultraventure 2

The Topo Ultraventure v1 was our best-selling trail model of 2020, and third-best in the shop behind two road models. With a drop of 5mm and enough midsole cushion to absorb even the most technical terrain, it’s a versatile workhorse. With Topo’s signature wider toebox it’s a companion to Altra in offering more forefoot width. Stay tuned for our review of the v2.

**Note: Vibram, often Megagrip, is the compound used on other top trail shoes including the Hoka Speedgoat and Altra Olympus. I’m left wondering whether the XS Trek Evo used in this comparison was significantly less sticky than the MegaGrip I’ve had luck with historically. For a second round I’m planning to take the Hoka EvoJawz (Vibram Megagrip), Topo Terraventure (Vibram XS Trek), and Topo Ultraventure v2 (Vibram XS Trek Evo) back out to see if they perform remarkably different. Stay tuned for that update.

I didn’t have Hoka or Altra’s non-Vibram rubbers in the mix because, well, I can tell you that they just aren’t as sticky. One of the surprises for me was that Vibram didn’t come up higher in the mix. My plan will be to compare Vibram blends as a follow-up, and, to be sure, sticking within brand. The Topo Mtn Racer will be used for MegaGrip, testing against the UltraVenture 2’s XS Trek Evo.

Contagrip TA from Salomon on the Wildcross

The Salomon Wildcross, a model using ContaGrip TA, was one of my favorite trail shoes of 2020. It offers a bit more width in the toebox and midfoot than traditional Salomon models of similar trail-grade. The midsole blend is a great blend of cushion and responsivity, and the aggressive outsole lug configuration handles muddy trails quite well. It rolls in with a drop of 8mm and at a price point of $130. I had a blast running and reviewing this gem which you can check out here.

The Kaptiva is a lightweight nimble model within the LaSportiva lineup. The midsole compound is responsive with a bit of added protection from an unobtrusive EVA rockguard. The drop comes in at 6mm and the Kaptiva retails for $140.

The North Face’s VECTIV trail runners emerged in January 2021 from extensive testing and development. They went “all-in” with the design and materials process. I’ve enjoyed running and reviewing both the VECTIV Infinite, and Flight VECTIV. Both share the North Face’s proprietary SurfaceCTRL outsole rubber blend. They use 40% biomass in the rubber blend, making it more biodegradable.

Graphene from Inov8 on the TerraUltra G 270

The Inov8 TerraUltra G 270 is built to run long. Inov8 added a hair more cushion over its predecessor, and the model provides greater volume than others in the lineup. The graphene infused outsole is one of the more durable compounds on the market. Its zero drop tooling provides a balanced and responsive ride. Declaring it not only good for running down mountains with babies, but also clutching on a John Deer, I also had a great time running and reviewing the G 270. You can check out that review here. It rings it a $160.

Vibram Megagrip, used on models such as Topo’s Mtn Racer and the Hoka Speedgoat, may be one of the most widely known and used outsole rubbers of higher end trail running shoes. It’s a compound that I’ve had success and confidence in. In round one, I’d only included the Vibram XS Trek Evo compound. I didn’t think XS Trek would feel as relatively unremarkable, or different from Megagrip as it did. This led me to head back out for a second round of testing. I’m glad I did. Here’s the video from the Vibram round.

Brands and models using Vibram Megagrip include Hoka One One, one of the heaviest hitters in trail over the past couple of years may be most widely known with use in the Speedgoat, Mafate, and EvoJawz series models. Arc’teryx uses Megagrip in their Norvan VT, SL, and LD models. Altra in the Olympus, and New Balance in the Fresh Foam Heirro. In 2020 I wear tested and reviewed the Topo Mtn Racer, a model that I like, and which I used for this comp testing.

The traction of the Asics FujiTrabuco Lyte is what inspired this multi-shoe head-to-head test. Asics designed it to be light and nimble, adaptable to varied trail surfaces, and with excellent grip over wet rocks. I’d say they nailed it in those regards. While the outsole rubber may not be versatile over hard pack or paved surfaces, the traction and durability are solid. I believe the model phases out in Fall 2020 but we’ll look forward running the 2021 ASICSGRIP bearing model. It rolls in on a drop of 4mm and retails at $120.

I’m awarding ASICSGRIP the value award. It offers one of the stickiest outsole blends while also coming in 30% less expensive.

Butyl Rubber from VJ on the MAXx

The VJ MaxX softly segued into the US market in 2020. With roots Scandinavian roots in orienteering, it’s built to handle off-trail courses. The Kevlar-laced upper is relatively bombproof (outside of the tongue leather). The outsole butyl rubber, while not the most durable of compounds, lives up to “Best Grip On The Planet”. It’s quickly developed a cult following in the Adirondack and mountain athlete communities, spreading from OCR. While it may not win the award for out-of-box comfort, it breaks in nicely and excels at what it’s intended for. Check out our review here.

VJ lives up to their Best Grip On The Planet slogan with the Butyl rubber. We’re looking forward to run and partner with the brand as it evolves.

Shop with Us
Shop on Amazon

The stickiness of rubber is only one component of traction. The stickiest outsole rubber won’t do much for you in deep mud if the lugs are only 2mm deep. Sticky and deep 5mm lugs also won’t be appropriate for a hard-packed trail. Ultimately the fit, feel, and match of properties to trail condition should guide which trail shoe is right for you. The terrain and conditions which you’ll be running the shoe are also paramount.

Where the stickiness or grip of outsoles matters though, you may be able to take our findings, and see if a given outsole rubber blend is available on a brand and model that seems a good fit. As a bonus, next time you come across a social media thread wherein someone’s asking about trail shoes with the best grip, you can come armed with the data.

Stay tuned for the next round of head-to-head trail shoe competitions and thanks for the support!