WHAT I’VE BEEN WAITING FOR?

Hey Trails Collective, Ian here with a review of 2020’s Salomon Wildcross. The Wildcross is a model I was stoked out of the gates for with a first meeting in November, 2019.  My history with Salomon is finding models I loved isn’t great. Too often I found them either too firm and slappy, or too rigid and narrow. Or, in the case of their road line, the Predict 1 felt amazing out of the box, but proved an unresponsive marshmallow when running it. This has been tough as I’ve really appreciated Salomon’s commitment to trail. They’ve supported the community in the US including my events. And their coolness factor of their designs is consistently solid. The intent and specs on the Wildcross I hoped would change that.

I have put in a bit over 100 miles into the Wildcross. I’ve intentionally run it through a myriad of conditions from 24 hours in the ADK’s supporting Sarah Keyes as she went for the ADK 46 FKT with higher friction rock, wet logs, stream crossings, and a solid day of vertical gain and loss. On the trails in Ithaca over hardpack, smooth singletrack, slick rock stream crossings, and well, literally swimming with them on mid-run on hot days. Let’s dig into the stats first. 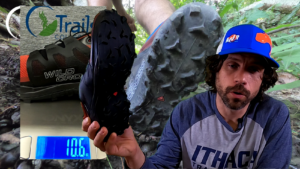 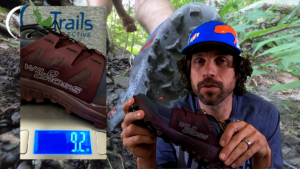 The Salomon Wildcross weighs in at 10.6 oz for a M’s size 9, and 9.2 W’s size 7, (both 0.4 oz heavier than publicized weights),. Their stack heights are 29.5 in the heel, and 21.5 in the forefoot for a drop of 8mm. What I’ve found over the 100+ opening miles is that Salomon probably should have named this nimble gem the Salomon Liger instead.

Let’s run you through the design, materials, some comparisons, and, most importantly, whether I think they all work individually, and pulled together into a single unit. 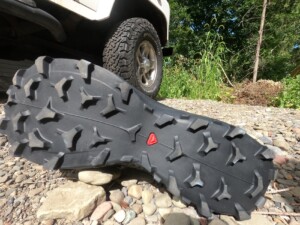 Unlike the design of our economy and politics, let’s take it from the bottom up. The outsole. Salomon uses their ContaGrip TA. This is a pretty versatile blend, stickier than road-oriented companies, but not quite as tacky as the Butyl used by VJ (in this case the Maxx which stuck on stream crossings better than the Wildcross ), or Graphene used by Inov8. However, 100 miles into the VJ I’d already worn through one of the lugs, so Salomon is up on durability as the wear is negligible. I don’t think it can match the durability of Graphene, but it feels a bit softer than both it, or Vibram’s Megagrip, so there are tradeoffs.

The lug pattern they use is in line with the aggressive nature of the shoe and works really well. Its 6 mm lugs are aggressive. Their asymmetry allows it to corner and grab well, a difference versus the Speedcross’ traditional linear Chevron shaped lugs. The wide separation allows them to shed mud in all but the most shoe-sucking of conditions.

THE MIDSOLE: RESPONSIVE AND BOUNCY

The ContaGrip is layered onto an EnergyCell+ EVA midsole. In the Salomon lineup this serves up a good amount of energy rebound. It’s used in other models such as the Speedcross, but the Speedcross is to rigid for you to reap or feel the benefits. For roughly similar stack height depth, there’s considerably more torsional flex to the Wildcross vs the Speedcross. It’s probably closer to the Sense 4 Pro or Sense Ride 3.

That increased pliability makes a difference as it allows you to reap the benefit of the bounce inherent in the EnergyCell. I think it feels like a pretty perfect blend of cushion, responsiveness and protection. I’d say that it even conveys a youthful exuberance under foot.

The midsole also wraps up around the medial and lateral hindfoot. This allows it to provide a really effective level of lateral but pliable support. It doesn’t integrate a rock-plate (or stone guard) and I don’t think it needs to. I think the midsole is deep and pliable enough to provide ample protection. For the rare cases where you actually take pointed jabs to the feet it absorbs and conforms. 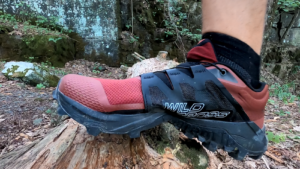 I was having a conversation this past week with one of my brand reps, and with a new model releasing in ’21. Despite having significant stack height, they’re inserting a plate into that shoe. The reason? Because people selling the shoes, and a good chunk of people buying the shoes, particularly in the Northwest, are being sold that rock-plates are necessary in trail shoes, and that they have a tougher go in selling them if something isn’t present.

I’ve spent time living and running in varied locations. I grew up on the #BeastCoast, but have spent time in New Mexico, California, Hawaii, Washington, and years in the Cascades in Oregon. In my experience and opinion, rock-plates are over-rated and unnecessary. So I’m glad Salomon doesn’t buckle into tossing them into all of their models.

The Insole: An unintended functional bonus? 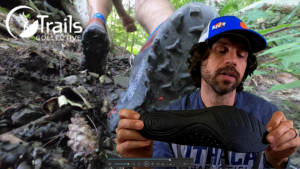 Set on top of the midsole is a sockliner or insole that’s worth mentioning. It may not be by intent, but I think it’s functionally better than Salomon’s higher end plusher insoles. In this case it’s molded Ortholite. It appears more closed-cell than, for instance the one in the Sense 4 Pro or Speedcross. For those who haven’t stopped to figure out the functional ramifications…open-cell Ortholite insoles feel great out of the box. They add plushness to a first step and hold up well. But they’re total sponges, absorbing and hanging onto water for a long time. The Wildcross’s does just the opposite, not absorbing or hanging on. That keeps your foot drier, reduces blisters, and is just more effective.

THE UPPER: CUE THE “DREAMS” 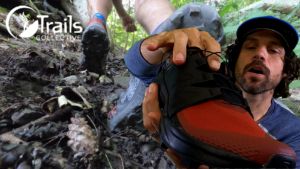 The Upper and Vamp of the shoe. One of the most noticeable features is the use of SensiFit in the Wildcross, an external shroud format that they call DreamTex. Aside from a ridiculous name which conjures up a giant Boeing plane or Unicorns (and not the ones which are Republican voters who plan on voting Democrat), I think the DreamTex works really well. SensiFit is most often integrated into the upper of models including the Sense 4 Pro and Sense Ride, noticeably inlaid into the mesh.

For the Wildcross they exist as external wings or shrouds which envelop the upper, connecting via the Quicklace in the middle. Some models that I’ve tested this year such as the Brooks Catamount, feel great underfoot, but clearly aren’t designed for BeastCoast trails or non-linear running. The Wildcross’s DreamTex does an outstanding job of keeping the foot positioned over the base while still allowing some degree of accommodation to off pitch terrain and movements. This is exhibited in the video review of running on a 45 degree pitch and feeling totally secure and without having concrete blocks to achieve it.

THE QUICKLACE: DROPPING IN THE TOP 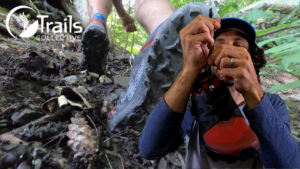 The Quicklace, which connects the two wings, I’ve been traditionally ambivalent about. I think it’s turned off more customers than it’s attracted. It serves it’s purpose though which is staying tied, not taking on water / mud, and being pretty durable. In models prior to 2020 several of my teammates snapped their Quicklaces midrace, leading to solid on-the-fly fixes. The design and material feature that I think was at least largely to blame, was a plastic tube set inside of the lace holes. When that tube got lodged with dirt / debris, it added in friction which wore the Quicklace down to the point of fraying and snapping.

Those tubes are gone, and the eyelets are a bit bigger allowing you clip the laces out if you so desire. Another change this year, in several models is the drop in pocket being accessed from the top. Some have commented on the lace being a bit more apt to pop out the top. I haven’t had much of an issue there though, and think the top-seat is actually a bit easier to manage.

The vamp underneath the laces is also joined by a mesh panel. This creates a sock-like gusseted upper which is really effective at keeping debris out, while allowing for the use of a fairly traditional tongue design, and to avoid an issue with bunching, or allowing dirt / gravel to get into the shoe. The heel has a fairly traditional integrate semi-flexible heel cup. When paired w/ the midsole wrap and DreamTex, it creates a really dynamically stable combination. On the toe, they add a rubberized lamination for protection and abrasion resistance. This is important because you may need a bit of extra protection in situations where it’ll inspire your inner lumberjack and trail clearer.

THE LAST OR SHAPE: A BIT MORE ROOM TO BREATH

On top of all this is the overall last or shape of the shoe, one of the most critical pieces for me on fit. The Wildcross has a bit wider midfoot gauge than the Speedcross (so narrow it gouges my arches), with it being more similar to the Sense Ride. It also boxes out the toe just a bit, a change they made to several models this year. The combination of those two may lose a couple die-hard Salomon users who love the fit and feel of the Speedcross. In my experience though, in over 20 years in run specialty shops, and after fitting a ridiculous amount of feet, I think the change will gain Salomon more customers than it’ll lose.

So, the takeaway. All in all, I love this shoe. It met every one of the hopeful expectations I had for it. The increased width in the mid and forefoot feels great. The traction is solid over variable surfaces. Their responsive underfoot on loose ground and tight turns. And, so far, the durability is solid. I’ll be excited to keep one in the rotation so long as they keep it in the line. If it sounds like one that might be up your ally, reach out to your local run specialty shop. If they don’t carry it, ask them if they’ll order you a pair. Or, help support us and pick one off via the Trails Collective online store. Thanks so much for tuning into this review and we’ll catch you on the next loop…..

Wanna get this Liger on your feet? Help support your local run specialty shop, or support us making this possible, and pick up a pair here: