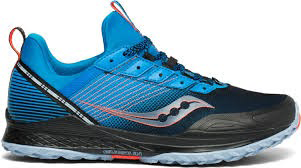 Saucony, founded along the Saucony Creek in Kutztown PA in 1898, and with current headquarters in Lexington, Mass, created a gem in the Saucony Mad River Tr which has been my favorite shoe coming out of 2019. A shoe with a namesake of the Mad River Valley in Vermont. In a trail world that a bit too often seems West-Centric, thanks Saucony for sticking to your regional roots on this one.

So, what am I looking for in a shoe to color what makes this, of dozens of shoes in rotation, my go-to? First and foremost I need a shoe that fits and is versatile on terrain accommodation. On both I think Saucony nailed it.

Even though this is the Mad River TR version 1, the fit and function is not new to the Saucony Trail lineup. In 2015 I was stoked to receive the first of the Mad River’s lineage, the Nomad into our shop. The shoe offered a lower-profile offset at 4mm, ample yet responsive cushioning, a unique low-profile lug pattern, and, most critically, a wider midfoot and a more oblique toebox design than most. I think the shoes ran great but were hamstrung by a really polarized ugly design and aesthetic paired with a dearth of shops bringing them in, or knowing what to do with them in foot and fit.

The Nomad was replaced in 2017 by the Koa which had a TR version and an ST version, the latter having aggressive 8 mm lugs. The aesthetics improved, the outsole grabbed a bit more, but the market share opening was still pretty small to keep it going.

Right out of the box it again nailed, for my feet, the fit. The revamped gusseted tongue on the upper was soft against my instep and proved really functional in keeping debris from sliding down in. The Everrun sole topper provides a feeling of cush right out of the box, but’s been the PowerRun midsole material that has held up well over hundreds of miles that I now have in my pair. The material is soft and light, yet firm enough to feel more responsive than a full EverRun midsole could have offered. There’s no rockplate which may be a limiter for some, but, for me, I don’t think it needs one. I’d rather have a shoe that’s smooth in transition 99.9% of the time vs a rigid forefoot plated design for that 0.1% occasion where I’ll take a jab to the metatarsals.

Their PowerTrac outsole is designed with a multi-directional lug pattern, with medial and lateral rows of thermoplastic teeth. This combination allows the shoe to claw back on ascents, and flatten out and flow on descents. This, paired w/ the responsive midsole material, in the words of ever-wise running buddy Scott Ulrich, makes the shoe feel like it just wants to run. I’d agree.

The outsole stickiness I haven’t found to be that remarkable, and not as good as either Salomon’s compounds or Vibram. The trade off is that’s it’s a bit softer. The lug pattern is smooth and effective, the shoe grabs on loose conditions and sticks to grittier rock, but is pretty slick over wet bluestone or wood in our neck of the woods, reflected in the photo above when eating it on this creek crossing in testing the shoe.

One of the core marketable and functional features of the shoe, and reflected in the outsole design, is customization. It’s clear Saucony is aware and considering of what modifications some runners use in certain conditions. On the Mad River they have targets for either drilling in additional drainage holes, or screwing in Hex Head Sheet Metal Screws for additional traction, particularly in the winter.

For those who may be a little bit leary to start drilling into a new or beloved set of shoes, I can maybe help out by saying that in my experience and testing, I didn’t find the added drainage holes to make a noticeable difference. I think the shoe drains pretty well on its own. As for the screws, I believe they did come in handy during the Frozen Snot trail race this past weekend.

They didn’t prove uncomfortable on the chipseal opening and closing miles, and they for sure added additional security and bite on the steep, technical, and sometimes snow-ice covered terrain. And it was a lot easier than having to stop and slap on some microspikes. One practical consideration is that Saucony recommends wearers use #8 3/8” Hex Head Sheet Metal screws. I’ve found that stores don’t carry that dimension combination. They have #6 3/8” or #8 ½”, but not in between. I went with the #6 3/8” and, although I lost a few during Frozen Snot, they performed well and mostly hung in there as well as providing markedly improved traction over stream crossings where I went down in earlier testing. One piece I’d like to see improved upon is is a bit broader outsole toe wrap. At present there isn’t much in the way of protection for kicking rocks over technical northeastern terrain. Additionally I don’t think the PwrTrac is all that sticky, I’m still waiting for a better blend from Saucony which will give me additional stickiness in this neck of the woods particularly in wet conditions.

Looking at the upper, Saucony also designed for customization. There are two options for lacing, the centered cord lines, and the traditional outer vamp holes. Those with higher insteps may benefit from the center cords, and those with lower volume or who need may spread may go w/ the outer loops. I mentioned the gusseted tongue being effective, there’s laminated toe guard for more durability of the upper versus protection from kicking rocks, and a loop to pair with the outsole channel for attaching a gaiter. Tongue and heel counter loops for quick pulling on and off.

With hundreds of miles on this pair, over the full spectrum of terrains, they’ve held up well. The midsole feels unbroken or compressed. There’s a few seem breaks or punctures to the materials in the upper, and one customer brought a pair back in with delamination of the toe guard. Both of those things unfortunately, in my experience haven’t been too uncommon for Wolverine Products. I shaved the outsole as I often do, and harder in working in road miles, but hereto, fairly par for the course. All in all I’ve loved the shoe.

I’m stoked that the Mad River is already more successful than it’s Nomad or Koa predecessors as the Mad River 2 will release in July 2020. They ditch the gusseted sock-like tongue in place of a more traditional design, and switch up the upper material to a bit softer fabric. From my vantage point I don’t think either of those changes are needed or necessarily positive. The midsole, outsole, and upper design otherwise stays the same. I’m going to be excited for V2 to drop this summer, but for those interested in the model, I’d say go in on a v1 as again, I think the tongue and materials on it are pretty slick.

For closest comps I think it stacks up next to the Nike Trail Kiger 5 but with a smoother heel transition, more cushion particularly under the forefoot, and a bit more aggressive outsole configuration. It’s softer underfoot with a bitter more aggressive outsole configuration than the Topo MT3, better durability and outsole tackiness to the Merrell Agile Synthesis, and more cushion with a bit less excess room in the forefoot vs the Altra Lone Peak 4.5.

So to bring it home, Saucony…I’m stoked and thankful for your connection to the roots with the Mad River. That you’ve continued on with a last and design which I think nails it, and with a product with incredible versatility. For me it’s been the best trail running shoe of 2019. Thanks for your support of the northeaster mountain trail running community in sponsoring a number of profile events, and looking forward to running what comes next.