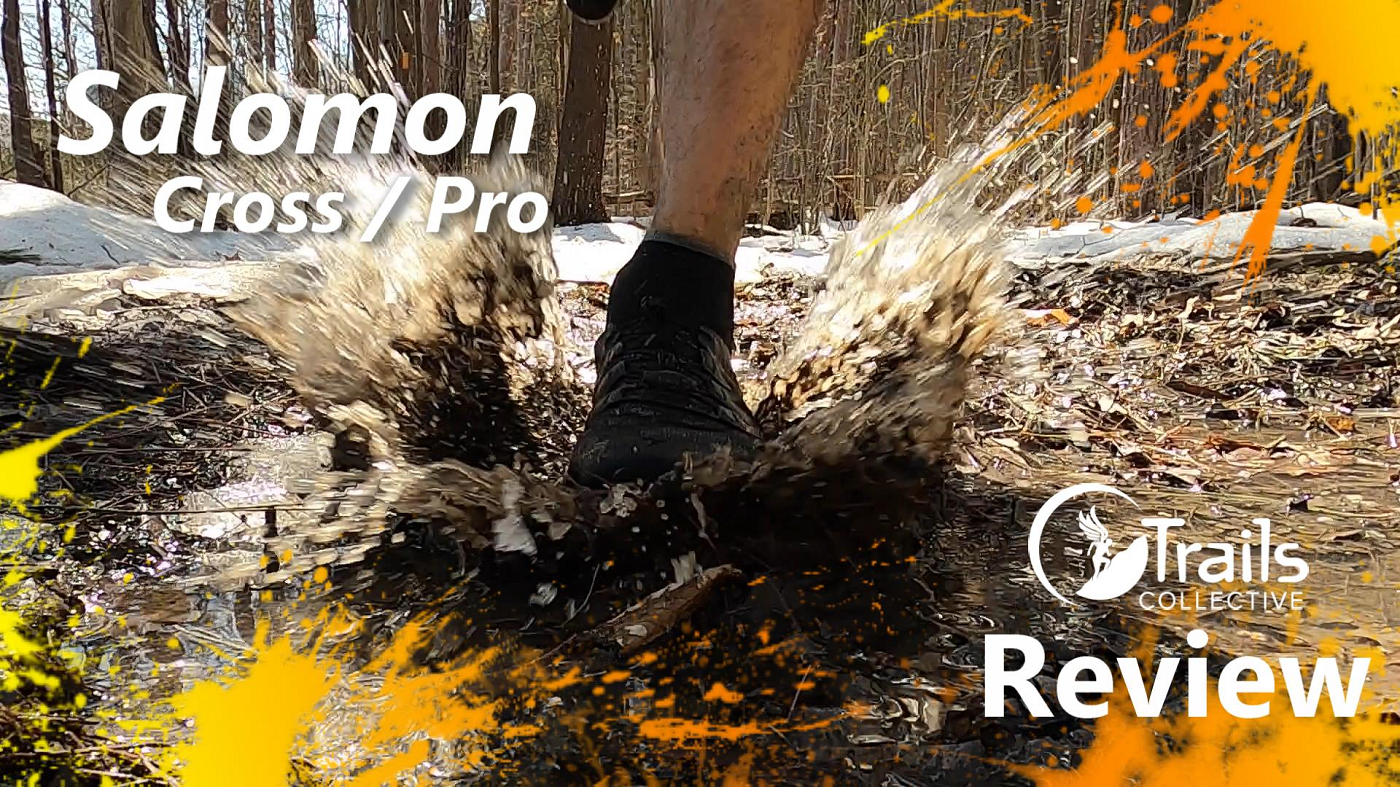 Salomon has consistently done a great job of creating slick and technically innovating products and supporting the trail community. Their shoes however haven’t been my go-to’s, as many have been too narrow in the midfoot or tapered in the forefoot. Additionally, many have felt too firm and slappy underfoot. For me, the 2020 Cross family additions have turned that page with the Wildcross being my favorite trail model of 2020. Does the Cross / Pro extend this positive turnaround for my feet, preferred feel, and performance on my trails? Here’s my experience so far.

I’ve run the Cross / Pro in deep snow, sloppy mud, over slick and slimy ascents and descents, through quite a bit of water crossings, and long mixed surface roads. For my foot it has an easy-on glove-like upper which does a great job of keeping debris from dropping down into the shoe. The combination of supportive Twinskin and reinforcing Matryx wings allows it to provide adequate support over off-camber pitches. The cushioning isn’t plush but the EnergyCell+ paired with flexible chassis allows it to strike a great balance of cushion, responsivity, and protection. It handles sloppy cornering well with decently sticky rubber. Let’s further dig into the components.

The Cross / Pro wove into my testing lineup following miles into and a review of the North Face Flight Vectiv. I found the Flight Vectiv’s upper to be really comfortable, advanced in design and materials. However, for a trail shoe it wasn’t quite there as it too easily invited grit and debris to drop down in at the ankle. I’d wondered whether the Cross / Pro, similar in concept, would come up equally shy of the mark. Here’s what I found:

Proof in the Posthole

My first run out of the box started with section on a snow-covered recway. My wonder of whether they’d perform similar to the Flight Vectiv were immediately dispelled. For 1.5 miles of postholing in 20″ of fresh and heavy powder, only a small amount of snow penetrated the top inch, and literally none made it down into the shoe. They excelled equally as well in dirt and mud once the snow melted. So what are the materials and design, and are their any misses?

The upper of the Cross /Pro is a proprietary blend of yarns used to create what Salomon calls “Twinskin”. It’s a patented process of knitting a “tube” of material, very similar to a sock. That tube is then folded back over itself on a specialized last to create a double layer. Those two layers are then put under heat and pressure around the last to weld the layers together. The result is pretty wild, feeling like a heavy duty knit with a touch of 4-way stretch. When you remove the insole you’ll see that it is a full tube rather than sidewalls connected to a traditional lasting.

Instead of using a TPU toecap like nearly all other brands at the moment, they’re able to heat weld in a firm and formed cap between layers. Same with the semi-rigid heel cap. On both they have spot-TPU for abrasion resistance and durability, but the structure comes from the Twinskin layering. So to is the minimal padding fused in to what would be the tongue.

Adding support to the Twinskin knit upper are Matryx Sensifit wings used as quarter panels. As I’ve mentioned in prior reviews of the Wildcross, S/Lab Cross, and VECTIV Infinite, I really like Matryx. It’s hydrophilic so it doesn’t absorb water, it’s flexible, and, in being woven with Aramid / Kevlar, it’s pretty bombproof. While the Twinskin is supportive in and of itself, the Matryx wings provide ample reinforcement. They’re partially fused on, provide pretty optimal support over off-camber pitches, and connected with Salomon’s signature Quicklace cords. Additionally, connected to the wings are two bungy cords that allow securing of the quicklace.

The overall fit of the Twinskin design I think is pretty outstanding. It allows for the foot to push a bit if needed with wing reinforcement holding the foot quite well over pitched surfaces. The thermal infused toe cap ads a bit of depth to the toeline, and the one-piece sock design provides gusseting. Further, they did a pretty outstanding job in having the heel and ankle collar fit snug enough to keep debris out while not abrading the instep or malleoli (ankle bones). However, if someone is going to have issues, it may be in these areas:

While the Twinskin cambers in a bit near the achilles, the cup or calcaneal pocket itself isn’t that deep. An individual with a really prominent heel or calcaneal cleft may run into issues with the heel collar either not meeting the ankle close enough. Or, which is what I experienced a bit, is that you’ll feel a bit of heat over the heel. In my case, because the Twinskin fabric feels pretty industrial vs other engineered knits (such as in the Flight VECTIV), it’s not quite as soft, and you can feel the striations in fabric. On most runs I experienced a bit of heat building over my heel. Although I didn’t get any blisters, even after a 3 hour long run in them, some people might.

I actually like minimally or spot-padded tongues. For each model out there designed as such however, some people will experience tension from the laces or cords biting into the instep if really cranked down. I also foresee that some people may feel that the Twinskin tongue will come up a bit too high on the ankle, and cause a bit of abrasion. I didn’t have negative experience of either of these, but I foresee some people might.

The Twinskin fabric is treated to resist taking on water, and the Matryx wings are hydrophobic. Both do a great job of allowing water to push out. The Cross / Pro for me seemed to drain water fairly quickly after full submersions. The insole, non-porous in foam but with holes to allow water to pass, does a good job of not hanging onto water once it’s in. However, what I did feel was that the Twinskin, once saturated, does tend to remain wet and takes quite a while to dry. Similar to wool, even spending time in full submersions in snow-lined creeks, it didn’t feel cold or wet next to my foot, but I could tell the fabric was saturated. For those wanting a similar underfoot function but needing to keep water out, the Wildcross GTX could be a good alternative.

EnergyCell+, an olefin-infused EVA is used for the midsole foam underfoot. I’ve liked EnergyCell+ as used in both the Wildcross and S/Lab Cross. I think it’s a great fit in the the Cross / Pro as well. It doesn’t provide a plush road feel underfoot, but by seasonal necessity I did run it over some longer miles on roads (a mix of wet gravel, and paved), and it felt just fine. The chassis of the shoe, that is the last and related components, do make a difference on how the EnergyCell+ is felt. In the Speedcross, I think the full package inclusive of midsole feels like a tight brick. The malleability and chassis in the current Cross family outside of the Speedcross allows you to feel just how nice a midsole foam EnergyCell+ is for the trails.

Although not listed in specs, and I haven’t sawed it in half, I don’t believe Cross / Pro has a plate or Pro-feel film. I think that rock plates are over-rated and used. The Cross / Pro has enough midsole stack to be plenty protected. The video review above has a clip wherein I bounced atop a sharp sapling stump. The EnergyCell+ and Contagrip TA+ absorbed the impact with no discomfort.

The Cross / Pro outsole is Salomon’s Contagrip TA compound. The “T” stands for traction, meaning it has the deep penetrating lug depth designed for loose or muddy surfaces. The “A” stands for adhesion, meaning this is the rubber compound Salomon uses for optimal grip especially in wet conditions. This is the same outsole rubber blend used in both the Speedcross and Wildcross. The rubber itself is pretty solid in stickiness. While it didn’t come out in the top tier in our head-to-head matchup of outsole rubbers, it’ll do just fine in variable and sloppy conditions, and surfaces.

The Cross / Pro is gifted with widely-spaced, aggressive 5mm lugs. The configuration is the same as that used in the Wildcross. The lugs are triangular Atari in shape, with swooping three-side faces. The design I think is quite effective in providing multi-directional traction and only once have I gotten a rock sandwiched between. They’re pretty effective in gripping well on loose ascents and descents, and corner well.

The Cross / Pro is built with a bit narrower, “race-like” chassis than it’s nearly identical Wildcross. I took comparative width measurements of the Cross family lineup. This should give you a sense of which model may fit your foot best. Comparatively:

I took the measure at the widest part of the forefoot, across what would be the heads, with the caliper at midsole level. Of the bunch, the Cross / Pro comes up middle of the pack in forefoot breadth. The Twinskin allows the forefoot to push out a bit if needed.

I took the measurement at the point of midsole meeting Twinskin at narrowest gauge. For me, the narroweness of the Speedcross in the mid and forefoot made it a no-go. I’m stoked that the Cross / Pro retains a wider gauge, same as the Wildcross. In the photo, the S/Lab cross appears a bit narrower than it is, as the midsole rubber cambers out above the outsole. It’s also soft enough in materials where I didn’t experience any midfoot bind or bite.

I took the measurement at the midsole level mid-heel. It’s width is 5% narrower than the Wildcross, but 20% wider than the slim S/Lab cross. I do prefer the middle-ground width territory of the Cross / Pro.

Toe spring is a measure of the shape, or angle of how much the toe rises from the surface. In feel it influences the roll of toe-off. In my experience, while a high angle feels snappy, it can also create splay and strain under the metarsals. I hadn’t though too much about this angle until a viewer of our WildCross YouTube review messaged me about the feeling in the forefoot running the Wildcross. I’ve since been teasing out the feel and importance of this measure. Extending the comparison, within family, the Wildcross toespring is 5% greater than the Cross / Pro. The S/Lab cross is 25% greater. I personally am most comfortable in the Cross / Pro in this property.

The Salomon Cross / Pro is yet another really solid shoe in the Cross family lineup. The Twinskin upper is truly at the forefront of materials with the design nailing where others such as the Flight VECTIV come up short on trail. It performs really well in sloppy variable terrain in both lug design, and upper which keeps debris out. The integrity of the Twinskin plus added Matryx wings allows it to hold exceptionally well over off-camber pitches for knit uppers. The midsole compound is a sweet middle ground of feel and responsivity. While it doesn’t have the forefoot volume of Topo or Altra, it should accommodate most feet, and the midfoot provide adequate birth. For those able to shell out $160, this is a pretty capable, and beautiful model to consider.