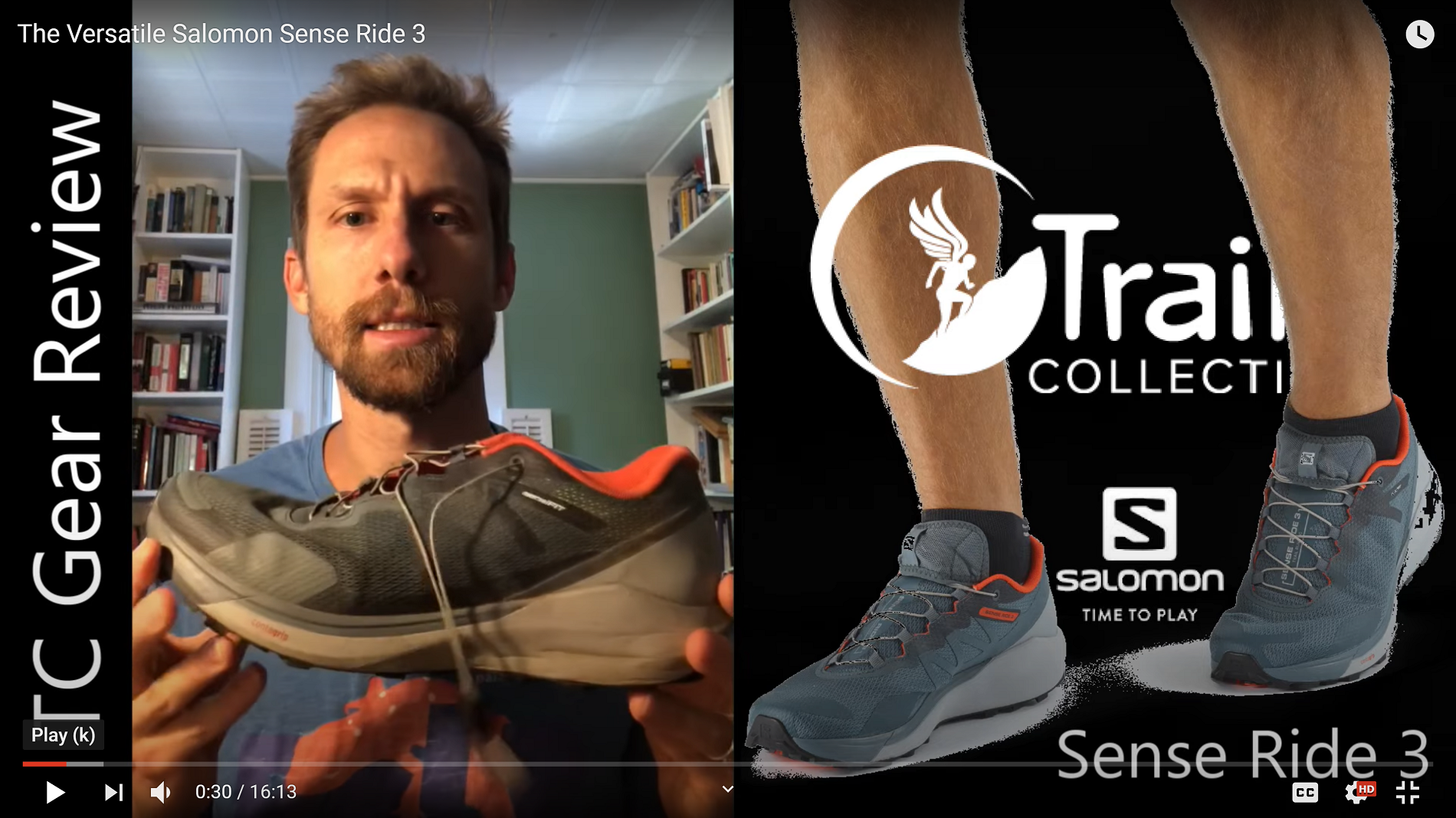 What I love about the Salomon Sense Ride 3 is the shoe’s versatility. From trails to roads, inclement weather to sunny days, the shoe performs well across a variety of terrain and conditions. Salomon advertises that the Sense Ride 3 “draws on road-running standards,” which is readily apparent in the Ride’s smooth heel-toe transition, soft yet responsive cushioning, and comfy upper. After running 160 miles in the Sense Ride 3, I find myself slipping them on just as often for road runs, especially on wet and snowy days, as for trail runs.

So let’s review the features of the Salomon Sense Ride 3 from the bottom up.

I am a fan of Salomon’s Contragrip rubber. On the rocky and rooty trails of Central New York, the rubber on the bottom of your trail shoe is often more important than its tread. Salomon’s Contragrip lives up to its name on slick rocks and roots. The Sense Ride 3 has a full Contragrip outsole for maximum coverage and increased durability with a few small grooves for flexibility. The outsoles of all the Salomon trail shoes that I have trained and raced in—Sense Ride 1, S-Lab Ultra 2, S-Lab Sense 6—have this durable and grippy full-length Contragrip bottom, which is one of my favorite features of their shoes.

As for the tread, the Sense Ride 3 features ~4mm lugs that provide solid traction as long as the trails are not too muddy. As with most features of this shoe, Salomon went with a lug length and geometric layout that works for a broad variety of trails and trail conditions. If you regularly run on muddy or snowy trails, you’ll likely want to get a soft-ground shoe with more aggressive lugs like the: Salomon Speedcross, La Sportiva Mutant, or Inov-8 Mudclaw.

Salomon’s new Optivibe midsole is a winner for me. I was skeptical if I’d notice a difference between the Vibe midsole of previous models and the new Optivibe, but I did. So far I’ve found the Sense Ride 3’s Optivibe midsole to be slightly softer and more protective yet also more responsive than the original Sense Ride, which featured a Vibe midsole. Optivibe is a combination of two foams, one that dampens and one that propels, which Salomon claims reduces vibration by 15% while increasing shock absorption by 8%. While I’d take those numbers with a grain of salt, I’ve found the Sense Ride 3 to have a smoother, stabler ride than its predecessors.

In addition to the “dampening” foam of the Optivibe, the Sense Ride 3 features segmented ProFeel Film (i.e. a rock plate) for protection on rocky trails. The ProFeel Film has kept my feet from getting too dinged up but is still flexible enough to not make the shoe feel too stiff underfoot. The relatively low stack height of the shoe (27mm in the heel, 19mm in the toe) provides decent ground feel in what is a well-protected and cushioned midsole.

The Sense Ride 3 is slightly stiffer and heavier than its predecessors in part because of the Optivibe, however, the trade-off is worth it as the new midsole provides increased comfort and stability. As someone who prefers a softer ride in my trail shoes—for instance, I wore the Hoka Challenger in my last 100k—I’d feel comfortable running 100k in the Sense Ride 3 and even up to 100 miles if the course wasn’t too technical.

A good upper is one you don’t notice. When I sat down to write this section it dawned on me that I had nothing to say because the upper of the Sense Ride 3 has worked well for me so far. As someone with a narrow–medium width foot, there is a comfortable amount of room in the toe box. It’s not spacious so if you have a wide foot or you like to splay your toes, you’ll need to look to a different brand—e.g. Topo or Altra. For me though, there is a bit of breathing room but my foot still feels locked down in the shoe.

The Sense Ride 3 features a heartier upper with a denser mesh, higher midsole sidewalls, and a more fortified heel, all of which come together to provide a more supportive and secure fit. This is a marked improvement on the original Sense Ride, in which I had issues with a lack of medial support in addition to the mesh of the upper tearing in multiple spots after 250 miles.

Like many Salomon trail shoes, the Sense Ride 3 has an EndoFit sleeve, which is a soft, partial sock liner that hugs the foot and is quite comfy. This sleeve combined with a stitch-free upper has meant that I’ve had zero issues with chafing so far. Inside the shoe is a Molded OrthoLite insole that is noticeably more comfortable than the majority of standard insoles, many of which are paper-thin. This is all topped off with the standard Salomon Quicklace system with one-pull tightening. This lacing system is my only minor complaint about the upper as it doesn’t allow for much variation in tightness. For example, it doesn’t allow me to easily pull the lower laces tight but leave the laces around the ankle loose or vice versa. If you don’t prefer the Quicklaces, you can easily cut them off and put in normal shoelaces through the wide, webbed eyelets.

At roughly 10oz with an 8mm drop and grippy, moderate tread the Sense Ride 3 is a door-to-trail shoe for me that I highly recommend for everyday trail running. I regularly wear them for my evening run home from work, which consists of a mixture of crushed gravel, dirt singletrack, and sidewalks. The shoe is firm and responsive enough to go fast and keep you feeling secure on the trails but it also has enough cushioning to go long distances. And it maintains its smooth ride when you transition to the road. As I mentioned above, I’ve even worn it on 10mi+ road runs in wet conditions.

The Sense Ride 3 will work well for a wide range of runners at distances from 10k–100 miles on the trails given its ample cushioning, smooth ride, and stable, well-protected upper. A couple of years ago I switched out of the original Sense Ride at the halfway point of a technical 100k race because my feet were getting too beat up. I don’t think that would be the case in the new model.

I also prefer the feel and fit of the Sense Ride 3 to the S-Lab Ultra 2, which boasts a hefty price tag of $180. For runners looking for a faster, firmer, more minimal ride, you should check out the Salomon Sense Pro with its 4mm drop, lighter weight (~9oz.), narrower fit, and aggressive tread.