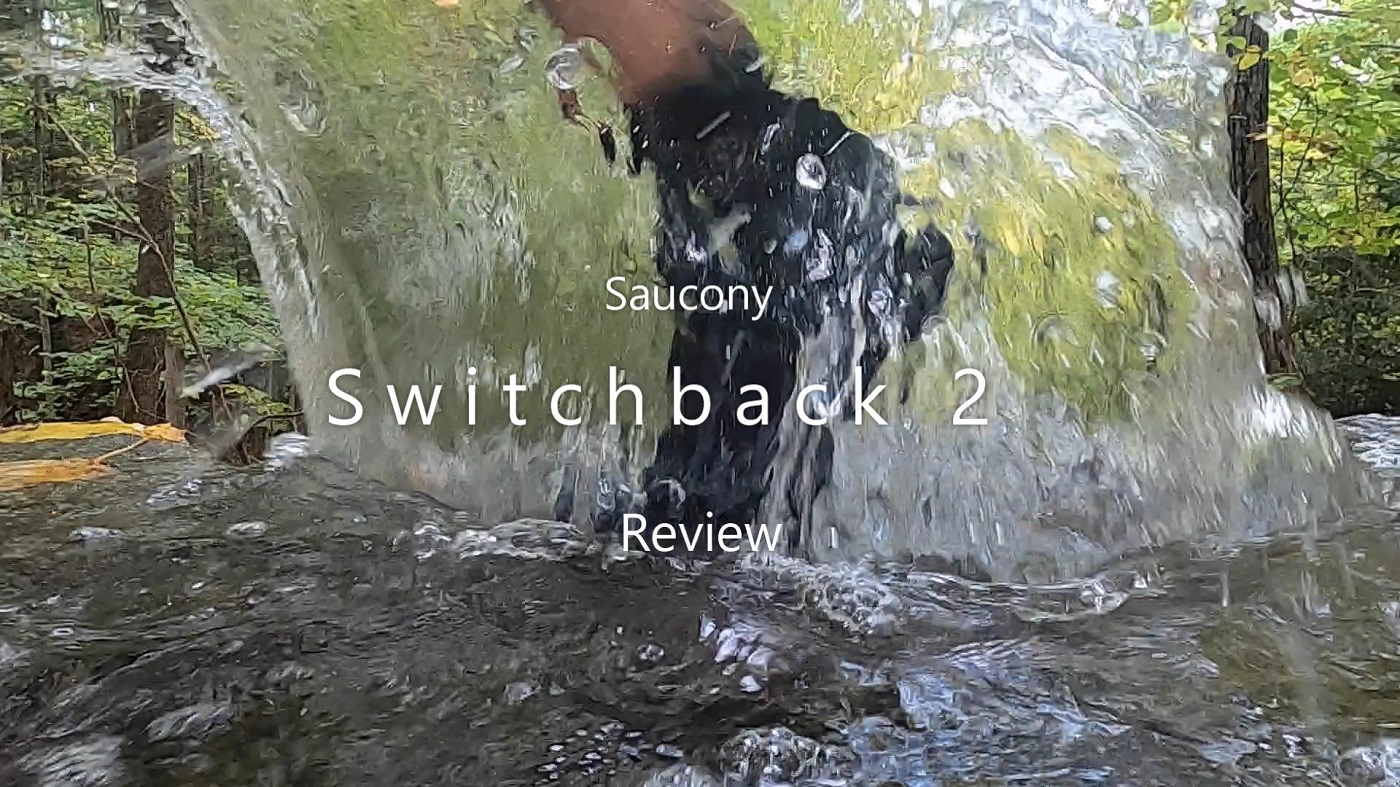 Our video review of the Saucony Switchback 2

Unlike road shoes, trail models provide a sense of connection and place. Models like the Speedgoat after Karl Meltzer, or the Topo Mountain Racer. For the Switchback 2 I get an immediate and visceral connection to the word. Whether it was all the switchbacks I intentionally avoided in creating the Whiteface Sky Races course. Or night runs during my time spent living in Hawaii, switch-backing up through lush forest to points where the Honolulu lights would emerge to light up the distant coast line. I like it, it speaks to me. 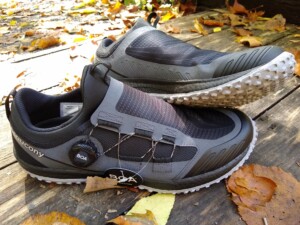 Lug Depth: 3mm (though, they seem more like 2mm)

Rockplate? Yes (Nylon which offers more flexibility than TPU – which I incorrectly tagged in the video)

So let’s break it down in function and feel, starting from the ground up 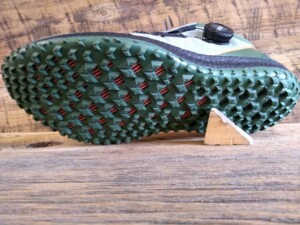 The Switchback 2 has low profile 3mm lugs. They’re molded into Chevron shapes which allow you to claw back on the forefoot on ascents, and pickup a bit of traction if sitting back on descents. The exposures between lugs both cut out weight, and contribute to excellent flexibility and ground feel. One shortcoming of the design is that, if running through sticky and deep mud, they can get caked between lugs.

The outsole is Saucony’s PWRTRAC tacky rubber compound with added nubs which, at least when the shoe is new, provides a hair more grab. This is a material design which was also used in Hoka’s EvoJawz (a comparable model in function and feel), and which I think actually does work pretty well. The traction is surprisingly pretty decent but the thin lugs are only so capable at grabbing at deeper mud or loose dirt. Although this is Saucony’s Tackier rubber, it doesn’t grab nearly as well as materials such as Topo’s Vibram, Inov8’s Graphene, or Salomon’s Contragrip, and skates across smooth wet rock in our neck of the woods.

The rubber is laid onto a Nylon rockplate in the forefoot, and midsole compound in the rear. I intentionally went after my go-toe pointy log, and surprisingly it handled it just fine, with no feel of a pinpoint jab. I’ve traditionally not been a fan of rockplates in most shoes. Given the minimal stack height in the Switchback, I think it’s necessary and effective. The Nylon material provides more flexibility than TPU which is why I probably also don’t mind it in this model. I’m not saying this will be your go-to shoe for majority technical and rocky runs, but I think it does just fine in absorbing the occasional rock or stick jab.

The heel is rounded in shape, making for a really smooth heel strike (for those who contact heel first), and the lugs have a 360 degree wrap for grabbing in varied planes. Secondary to bowing in my lower legs, and a typical inversion at my ankle articulation, I typically wear out the lateral heel of every shoe. Designs which provide a flex groove for heel contact typically give me a few more miles of durability, but that’s really rare in trail models. 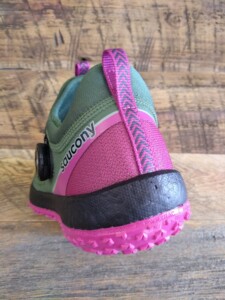 Their PWRRUN+ midsole is a functional improvement from v1’s full length EVRRUN. PWRRUN+ under my foot feels a bit firmer and more responsive than EVRRUN, and is thus an improvement for achieving a stable plant on varied trail surfaces. I really like the PWRRUN material. I did in the Mad River, and I like it in the Switchback 2 as well. It’s responsive enough to not lose too much time responding for a stable base, yet it’s soft enough to keep the shoe feeling nimble and sock-like underfoot. 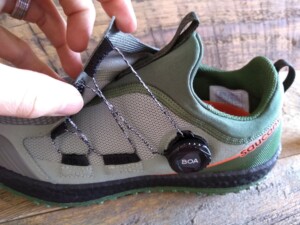 The upper is really slick, and a substantial modification from 2019’s v1. Next to the foot is a really soft and padded sock-like non-tongued upper with a pull-tab where the tongue would be, as well as one over the heel counter. The material over the instep proper is softer and with increased padding so as not to irritate your Navicular and Cuneiform bones. The medial and lateral portions are more traditional tight-weave mesh to allow for breathability and drainage. The Switchback 2’s welded toe-guards add a bit of protection from kicking rocks. A lateral synthetic wrapping which adds a bit of stabilization over the base as well as abrasion resistance.

The most visually striking component is the BOA Fit System. The BOA lace system is like precision fit on a speed dial. V1’s design had the BOA system top laced through IsoFit tabs. For a few people the stitching on those tabs frayed a bit, but it seemed more like manufacturing inconsistency more than failure of design or materials.

Saucony has moved away from IsoFit across their line, replaced on the Switchback 2 by a shroud or wrapped design. I wasn’t entirely sure about this update when I connected with the Saucony designer in 2019 at a conference in Austin. With miles in I have to thankfully say, I like it, a lot. Instead of synching from the top, it’s moved to the lateral side, improving the shroud wrap of the foot. I think the BOA integration works really well. It is easy to synch them a bit too tight, as I did in the opening mile, but it only took a second to pop the BOA dial out, and release a bit of tension.

One trade-off to the padded sock-like upper, with shroud overlay, is drainage. The sockliner is fairly unremarkable EVA. This is a good thing for trail shoes in that they don’t tend to absorb and hang onto water like plusher Ortholite versions, one of my gripes with models such as the Topo Mountain Racer. The padding in the upper also tends to hang onto the water a bit, and it takes a bit to exude it all through the upper after stream crossings.

The Switchback 2 runs true to size, has par-for-the-course midfoot gauge which captures my arch, which drops a bit, and a decent amount of room in a relatively oblique toebox. On steeper descents the shape and fit may encourage a bit of forefoot slide as I noticed a bit more contact in my toes, but a trade-off as it allows for healthy forefoot splay most other times.

I’ve not yet put a lot of miles into the shoe. One of Wolverine’s (the parent company of Saucony) strengths, in my experience is not durability. In the v1 some wearers had issues with the upper fraying at crease points around the metatarsal heads. Typically frays happen in shoes at the point of weakness between and overlay and mesh material. In the case of the Switchback that point is just above the welded guard material in the forefoot. My guess is that point may fail similar to v1’s, but only more miles will tell. 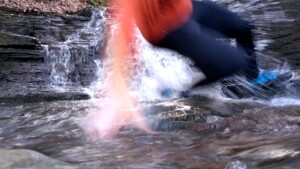 Knowing What It Can (and can’t) Do

All in all I really loved the v1. Out of the box, I really love the Switchback 2 as well. My first car as a teenager was a 1987 Honda Accord. I loved it, and, as teenager’s sometimes do, took a bit of liberty in figuring out what the car was really capable of, even if, in hindsight, doing so exhibited some very questionable judgement. I took it up to 140 miles per hour, took it off-roading including for some laps on a cinder track, and got pretty savvy at riding tilted on medians. This is all to say I loved feeling connected to that vehicle and figuring out what it was capable of.

Like the Accord, you learn over miles what it can, and can’t do. It’s a great shoe for mild terrain, but it won’t be your go-to for miles of rocks. It’ll grab at varied surfaces, but it can only claw so-deep in loose topsoil, and the lug design can get caked if in sticky mud. And creek crossings? Well, as I learned with the Mad River, the Saucony rubber isn’t going to excel in traction. Durability, yeah, it’s not going to last a thousand miles. With all those weaknesses considered, I’m no less excited to put this shoe on for near any trails, or to recommend it.

I love the fit and feel of the Switchback. It ends up feeling more an extension of my foot, and, in that regard, keeps me feeling and connecting to varied terrain. The midsole is a great blend of cushion and responsiveness. It makes me happy and want to really open it up and will continue to be a favorite choice for mild terrain and distances up to a marathon. So, if you’ve room in the closet for a second pair and niche model, definitely give the Switchback 2 some consideration.

Ready to love a pair? Pick up a pair (Women’s and Men’s) from the Trails Collective shop.

Shop Men’s with Us
Shop Women’s With Us