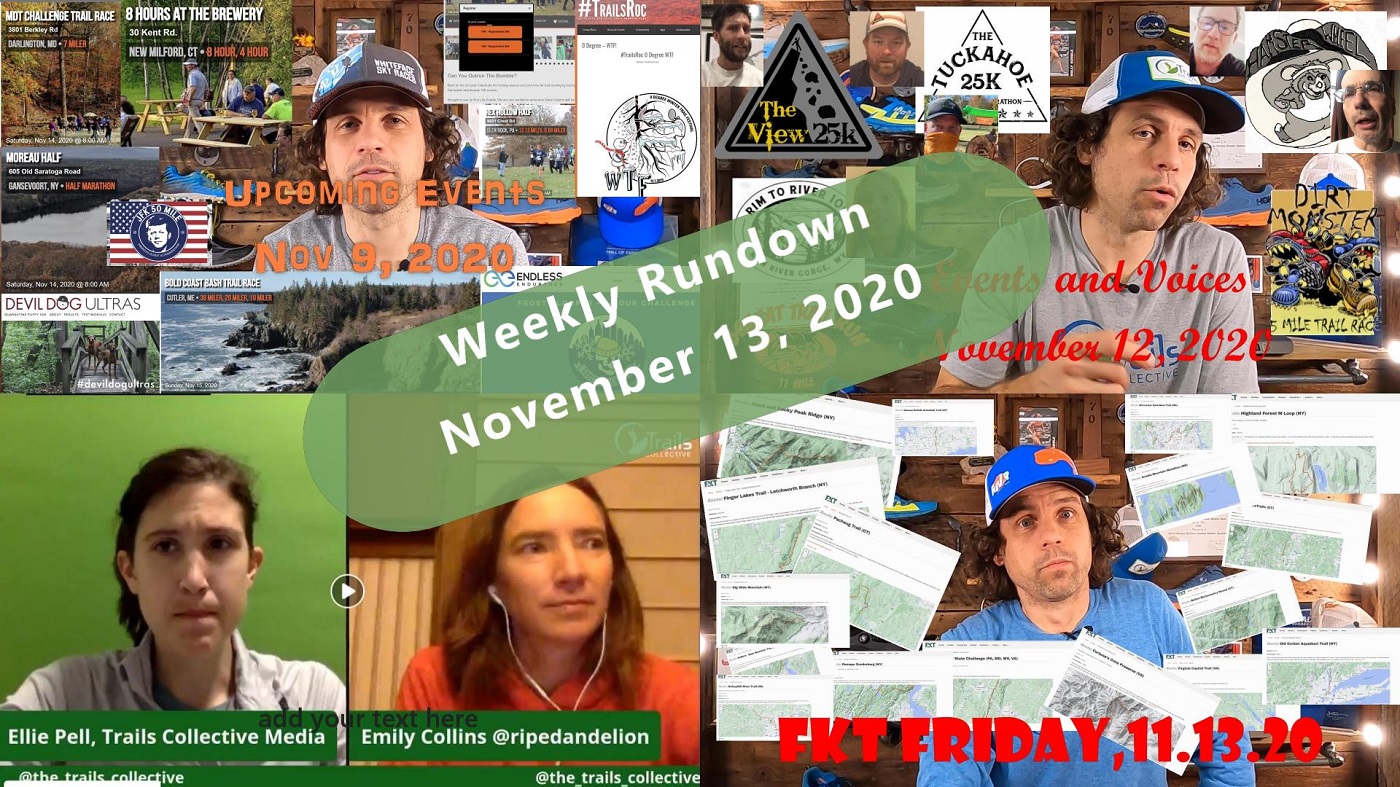 This week we plug upcoming events from Virginia north. Voices of event directors and finishers. Our first reformatted TC Interviews live with the amazing Emily Collins. Published our written reviews of the Salomon S/Lab Cross, as well as ten of the best waterproof running jackets on the market. And to close the week, a rundown of awesome efforts in the form of FKT Friday. Let’s dig in, starting with upcoming events.

The 11th running of the Stone Mill 50 is going down on the Seneca Greenway and Muddy Branch trails in Montgomery County MD. The course is rolling and predominately single track with a  few stream crossings. It’ll be an RRCA National Championship event in ’21 so preview it a couple weeks and throw down in ’21. Per permitting, register now in wait-list format, and the final go pulls you in.

The MDT Challenge is a free 7 Miler running on the Mason Dixon Trail in Darlington, MD. Event limited to 100 and is capped out but keep it on the radar for a nice late season short race for 2021.

8 Hours at the Brewery

With 4 and 8 Hour options, this is sure to be another solid event put on by the crew at Steep Endurance. This round is at the Husatonic River Brewing Company in New Milford, CT. The event uses a one mile flat trail and grass loop. Around 120 currently registered with registration still live.

The Moreau Half will be an inaugural event put on by Mountain Dog Running, and using the rolling singletrack of the Moreau Lake State Park in Gansevoort PA, Albany’s capital District. The event is sold out for this year but check it out for 2021.

Run in Spring Valley Park in York County, PA the Hex Hollow Half offers up roots, rocks, two stream crossings, fast descents and challenging climbs. 13.1 and 6.66 milers are sold out with COVID caps in place at 100 runners per distance.

Typically a 100k and 100 mile in Prince William Park in Triangle, VA, the Devil Dog Ultras had to restructure into a limited field sized 50k which is capped out.

0 Degree WTF is a 5M put on by the most excellent crew at #TrailsRoc in Pittsford, NY. Limited COVID field size and capped out, but check it for next year:

BTB, a 10k put on by Run Life Events at the Watchung Reservation in Mountainside, NJ is still open. Some part of it is outrunning the Bumble but I’m not clear what the Bumble is so somebody weigh in and help me out will ya? Entrant’s list isn’t shown but with only 50 spots still remaining, get on it now if interested.

The Naked Nick, another Uber Endurance Sports gem, will again be running at Blue Marsh in Leesport, PA. Classic trail events at classic race fees. 25k is only $35 duckets, the 50k, only 39. Only 84 spots remain so get on it now if interested.

held at Cooper River Park uses a fast flat 3.75 mile loop with great views of the Philadelphia skyline and water in Pennsauken, NJ. It’s put on by the crew at Endless Endurance and currently has 141 registered, and open until November 30. So get yourself in the hopper for a Frosty Looper campfire mug, beanie, beanie, and 8 hours of glorious punishment here.

The FF5k runs in the Roosevelt Forest of Stratford, CT. There’s currently 25 registered but a cap of 50, so if interested, now would be the time.

Another no-doubt wonderfully punishing option put on by the crew at Live Loud Running. This round is capped out at 50 entrants but check it out for next year:

Rim to River Endurance’s Rim To River 100 inaugural running ran on a beautiful weekend. We were able to connect with the women’s winner, Whitney Richman who plugged in in the video above. Also look check out the crew at Ridge Runner’s Live Episode #37 which was going live about the time I was filming. They check in with Whitney as well as Caleb Bowen and are sure to get some good details and shop talk. https://www.youtube.com/watch?v=AR8IMWq3YYc

BNM6M, an event starting just after sundown at 6:30 pm ran in Cromwell Valley Park. The course was 6’ish miles including some fast single track, rolling hills, and a fast downhill finish. Results can be found here.

The Bobcat Trail 11 ran in Cunningham State Park, using the Catoctin and Cat Rock Trails of MD. They had a field size COVID limited to 55 entrants but with no lack of quality. Gabriel Rodriguez threw down for the win and big course record of 1:30 with Laura Bergmann securing the top women’s spot in 2:13, also a new course record. https://ultrasignup.com/results_event.aspx?did=72778

The Dirt Monster Cross Country race went down in North Park near Pittsburgh. Out of 116 finishers Dalton Kalbaugh taking the overall win in 30:38, with Justine Pollack taking the women’s win in 40:43. You can find the full results here.

The Hamsterwheel Timed Event, was put on by Just Keep Running  at the Hillsborough County Fairgrounds in NH. A gentle 4 mile loop used for 6hr, 12h, 24h, and 30h events including Relays. Field size was reduced to 175 and capped out. Although the results weren’t yet listed but, we were able to check in with in and get the rundown from the Bill’s squared. Co-RD Bill provided a rundown from the backend, while 30 hour finisher and legend Bill Odendahl on how it shook out in the field. Full results can be found here: https://ultrasignup.com/results_event.aspx?did=72741

The Tuckahoe 25k was put on by the Centreville Crushers and Algonquin Ultras, in Queen Anne, MD. It offered a good rolling course and middle distance for first timers and PR’s alike. Of the 205 finishers, the top spots went to Matt Berggren of Salisbury in 1:52 and Maria Miller in 2:06. We were able to check in with Coming RD Trent Swanson, and get footage from finisher Charles Starkey. Check out the full results here:

The View 25k a PA Trail Dogs event went down on November 8th in Hyner, PA. The intent was to put on a one and done fall event to give some individuals a chance to run a part of the Hyner View Challenger which was COVID canceled this past Spring. The course weaved in the first and third of the original bigger climbs including the signature Hyner View in this photo of RD Craig. I don’t have the full results but Anthony Wallick did check in with a bit of the rundown, at least of the men’s field. Sounds like it was a pretty wild ride for Eric Wolfgang and Joe “Downhill” Nardo, moving from 5th and 6th on the last climb into the top two slots into the finish. Thanks to Eric for getting a clip in on the day under the wire. Take it Eric. https://ultrasignup.com/results_event.aspx?did=79122

Cross County Trail Marathon and Half

Cross County Trail Marathon and Half put on by the crew at Atlis Endurance Sports in Springfield, VA with 61 finishers in the Marathon with Ariel Laguilles taking the win in 2:49 and Sarah Lataille in 3:54. In the Half, 43 finishers with Cosmo Morello taking the win in 1:27 and Lauren Curley on his heels in 1:31. https://ultrasignup.com/results_event.aspx?did=74762

We posted up the written reviews for:

Ten of the Best Waterproof Running Jackets on the Market

Ellie kicked off our revised TC Interviews Live format with the amazing Emily Collins. Check it out here: https://www.facebook.com/TheTrailsCollective/videos/2813352888898579