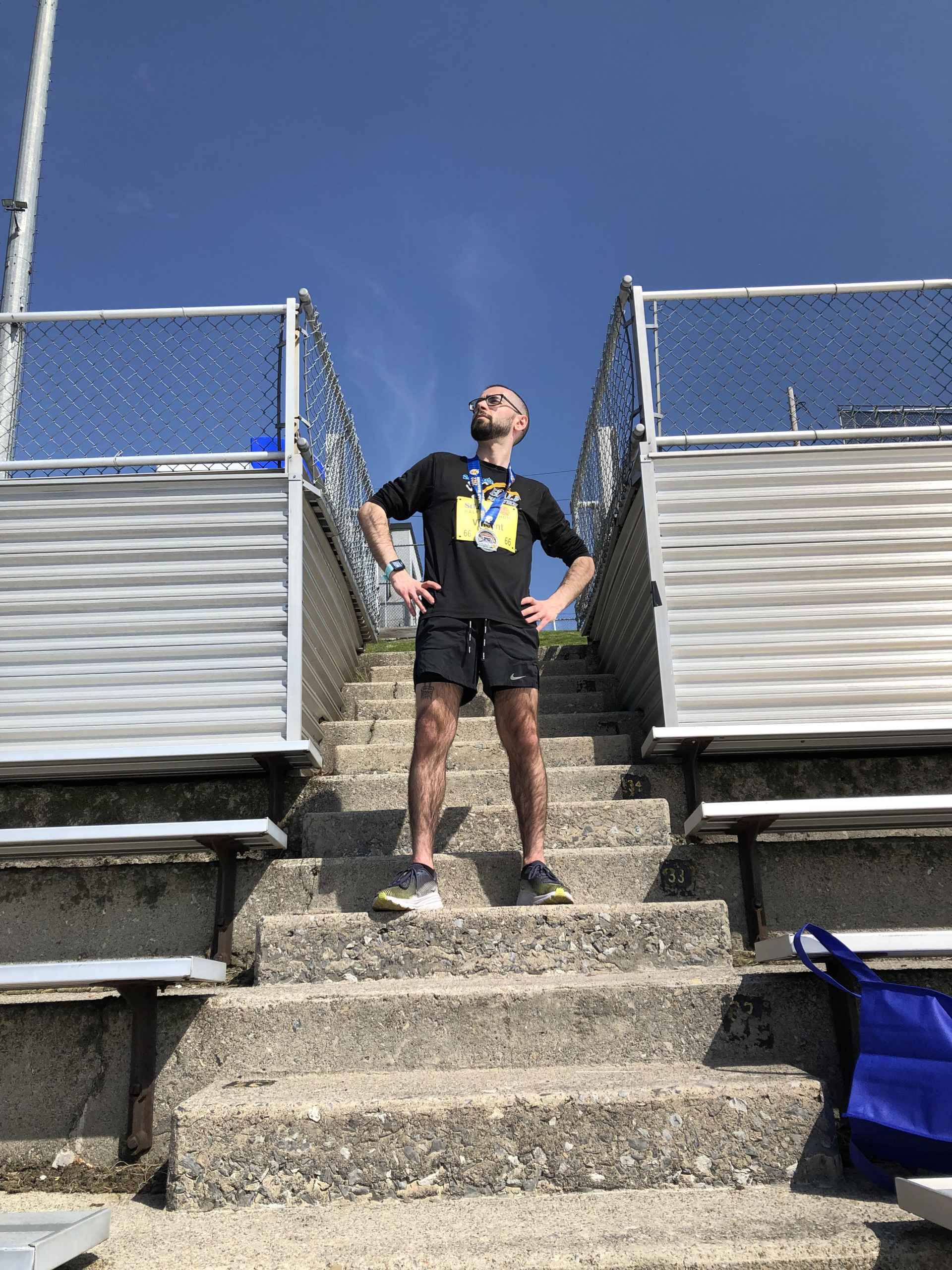 To Hell and Back

“Hey man, if the race is that important to you, then go for it. It’s your call.”

He delivered the response with expert-level diplomacy, honed over years of treating patients with the same fanatical glow in their eyes as that which possessed mine. I was asking for my PT’s blessing to race the upcoming St. Luke’s Half Marathon in Allentown, PA. And while he might as well have been saying “if it’s your funeral, I ain’t footing the bill” it was all that I needed. A crack in the door for my belief to creep in. It was on.

Five days out from the race, my targeted training had been non-existent. Since coming back from injury, the longest run I had done was eight miles, and that haunted my right knee for weeks afterward. Most of my runs amounted to a shorter distance than you probably cover in a hunt for Captain Crunch “Oops! All Berries” cereal at your local grocery store. But none of that mattered. While I was aware that St. Luke’s posed a physical risk in the form of a recovery setback, there was something that compelled me to embrace the necessity of the race, the narrative power which it held in my own personal arc as an athlete, competitor, and individual. St. Luke’s was scheduled to take place almost exactly one year after my fracture had occurred. It was the first and only half marathon I had ever run, back in 2018 when I was first falling in love with the sport. It was an opportunity to validate every struggle, every moment of pain and doubt that I had gone through in my journey back, and I sure as hell wasn’t going to let it float by, dooming myself to remember with wistful regret what might have been.

Which is how I found myself lined up at the start line that weekend, sun pouring onto tendrils of pavement visible between runners clad in outfits ranging from the sleek to the retro to the absurd. Amidst the rainbow of color and shirts testifying to races past and inspiring feats of endurance of yesteryear, a countdown rose in the mild air. Then there was no turning back.

The first few miles, as they always do, passed by in a blur. I had set an A goal of a sub-2 hour finish, so I stuck with the 1:55 pack in the early going, concentrating on my breathing, the footfalls around me, and the easy conversation, tinged with nerves, that flows when the oxygen is still plentiful. Volunteers tried to ensnare weak-willed runners with tempting offers of beer just a mile into the course. My immediate thought was that one of the more cunning elites had paid them off to sabotage the races of others. I tested the theory, jokingly, on a running buddy, and they agreed that it did seem sinister. Beers are for celebration, I reflected. The work was just beginning.

We approached the turnaround for the first of two out and backs on the course around mile 4.5, and as the spirits of some flagged, I found my groove, pouring encouragement out to those plodding along in the opposite direction and administering a few poorly-aimed high fives.

Bands rocked out, swaying with soul, jiving with funk, and bringing the energy through tried and true classics like “Don’t Stop Believin’” and “Hit Me With Your Best Shot.” I drank the Kool-Aid. I was sticking with an 8:45/mi pace, and I began to think that the 1:55 time goal which had once taken a back seat to the mere thought of finishing was attainable. I hadn’t stopped believin’. Not yet.

It wasn’t long after that that we entered the belly of the beast, so to speak. The next section, the Lehigh Parkway, was more my element. We traded pavement for gravel and some rolling ups and downs that shook the monotony and mental cobwebs of the roads. But after I’d made this transition to the softer ground of the second out and back, my quads began to complain a little. And even though the pain really wasn’t bad, it watered the seeds of self-doubt which remained, deeply rooted, and were looking for a chance to break the soil. You’ve already done eight miles, but what if that’s your limit? What if you’re asking too much of your body? And the million-dollar question: what if you reinjure your foot? That last one was so paralyzing that I sought to ignore it entirely at first. But soon I realized it wasn’t working, so instead, I tried to be present. I counted my steps. I promised that I would be smart, that I wouldn’t keep pushing out of pride if it came down to that. I focused on listening to my body. It told me to keep going.

By this point, the 1:55ers had drifted a couple hundred yards in front. I locked in on that sign borne by the group pacer, bobbing up and down against the blue sky, and resolved not to lose sight of it.

As I crept into double-digit mileage, the course came out of the lonely out and back section on the parkway, and the crowds swelled once again. My adrenaline started to pump. I felt mean. I had been denied the opportunity to compete for so long, and now that I was in that environment again, all my pent-up tenacity and frustration was being poured into every step. I embraced the rawness, the burn, and dug in further. Crossing a bridge lined with spectators, one of them called after me “alright Vincent!” I gave them a determined smile and accelerated. Then I heard a few echoes “Vincent! Yeah, Vincent!” and before I knew what was happening, the crowd began to chant my name: “Vin-cent! Vin-cent!” The joys of having a duosyllabic name. It was like something out of a movie, and I knew I had to rise to meet the moment.

Mile 12 came, and this time around, I grabbed that beer. Just the carbs I needed. Then I leaned in and turned on the jets for the final mile. I spotted someone I knew standing at the final bend before the path turned up to the finish at the high school track. Alex, a guy from my Wednesday night group run, had ripped off a 1:10 finish to nab the first place crown, then had come back out on the course to cheer everyone on. That was the last bit of inspiration I needed.

Once on the track, I noticed the 1:55 sign on the other side. The group was barely ahead of me. I found myself running behind a woman in a black tank top. She’d never see it coming. I floored it, and when she realized I was doing all I could to pass her, she broke into a sprint as well. And that’s how we crossed the finish line, together, in a dead heat. We managed brief congratulations through ragged panting, but our smiles said it all. We had both wrung everything out of ourselves in that brief 100 meter race, pushing each other to the limit. We were sweaty, exhausted–salt caked our shirts. It was perfect. I checked my watch for my final time. 1:54:36. I had smashed my goal and finished just seconds behind the pack with whom I had set out.

It’s easy for me to feel entitled, having been to hell and back with injury. Like I deserved this race. I’m not ashamed to admit that I cried on the drive home. Good tears. I was overwhelmed with the meaning I had found in what I’d been through and gratitude with where I found myself, the redemption I had achieved. That’s what this felt like to me–a redemption story. The rest of the day was filled with glorious self-indulgence: a trip to the movies with a friend, a Beyond burger and fries and cake, some booze, and watching the sunset with my feet up. But the truth is, any road can lead right back to hell, because in our sport, you don’t walk into it, or even run into it–you fall into it. It’s not some clearly marked path, but a hole covered with sticks and leaves which treacherously hide its location. And whether you fall in is unpredictable as, well, hell. It’s taught me to savor the moments when I’m riding high and recognize that they are passing, temporary. But that doesn’t make the perfect moments any less perfect. Sunday, April 24th, 2022, was a perfect day for me. I got there because I didn’t stop believing. And if I fall into that hole again, if I have to claw my way back out–well, I won’t stop believing then, either. 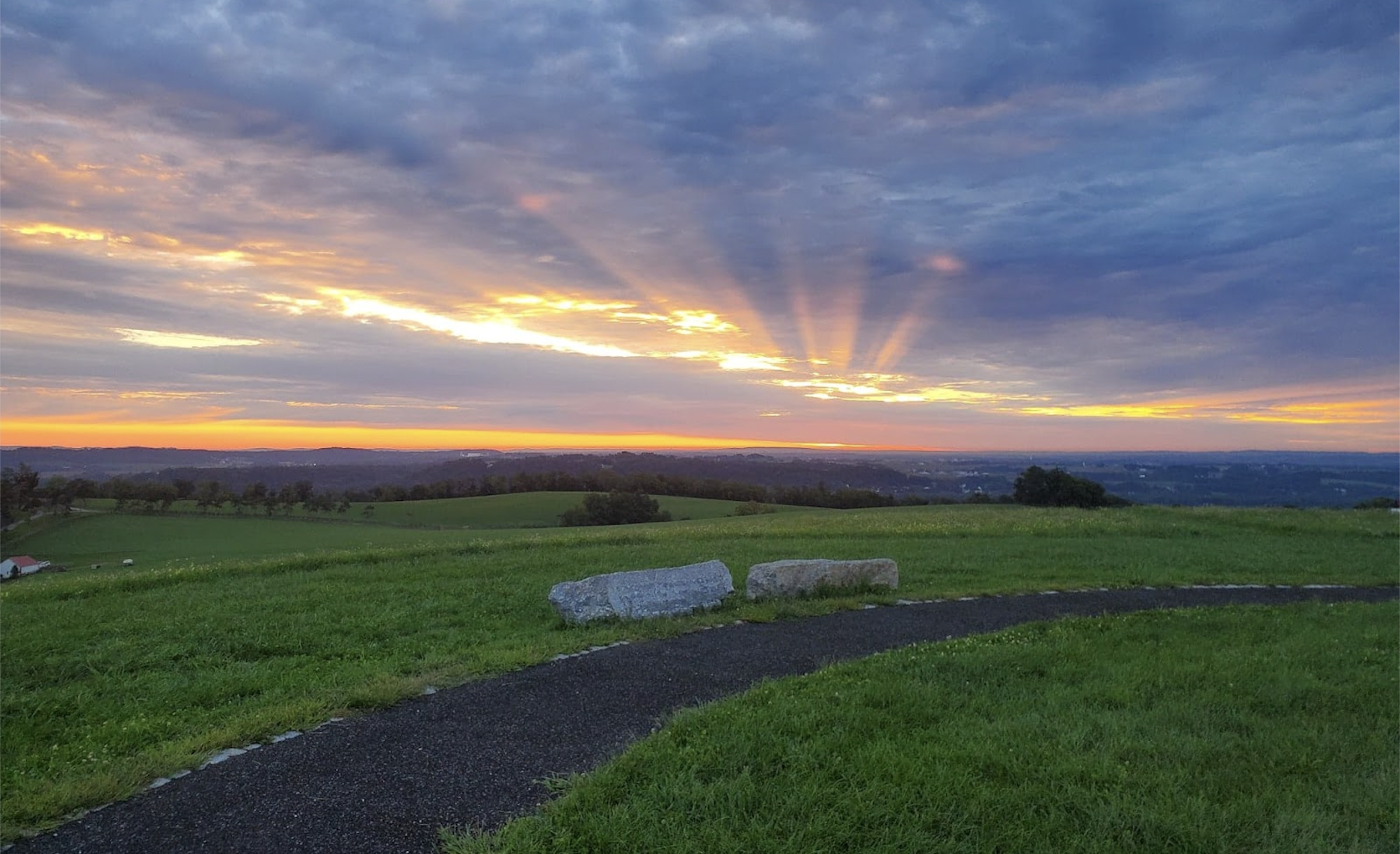 Your Trail: Susquehanna River Trails of Columbia and Wrightsville, PA

Sunrise at Highpoint Park along the Mason Dixon Trail 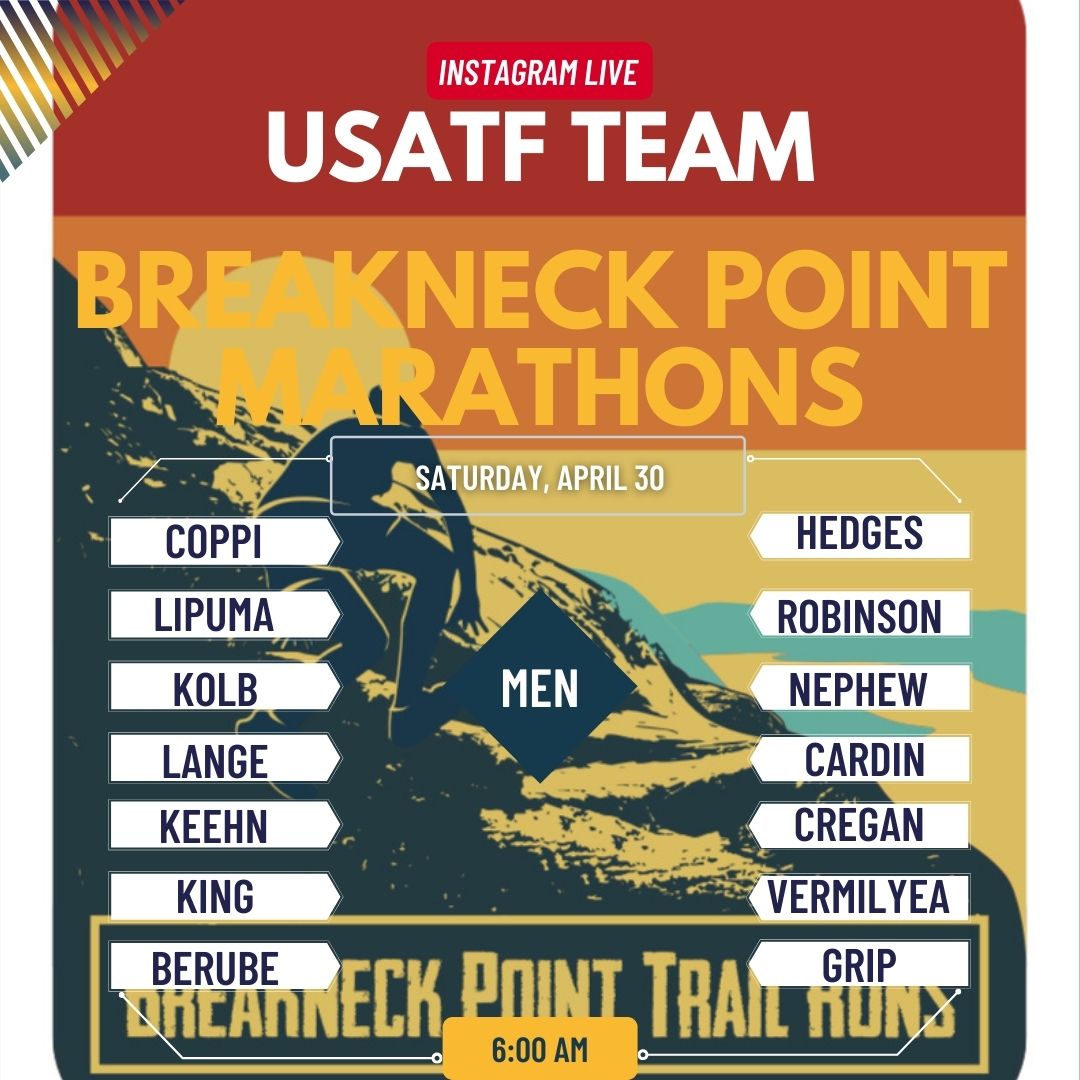 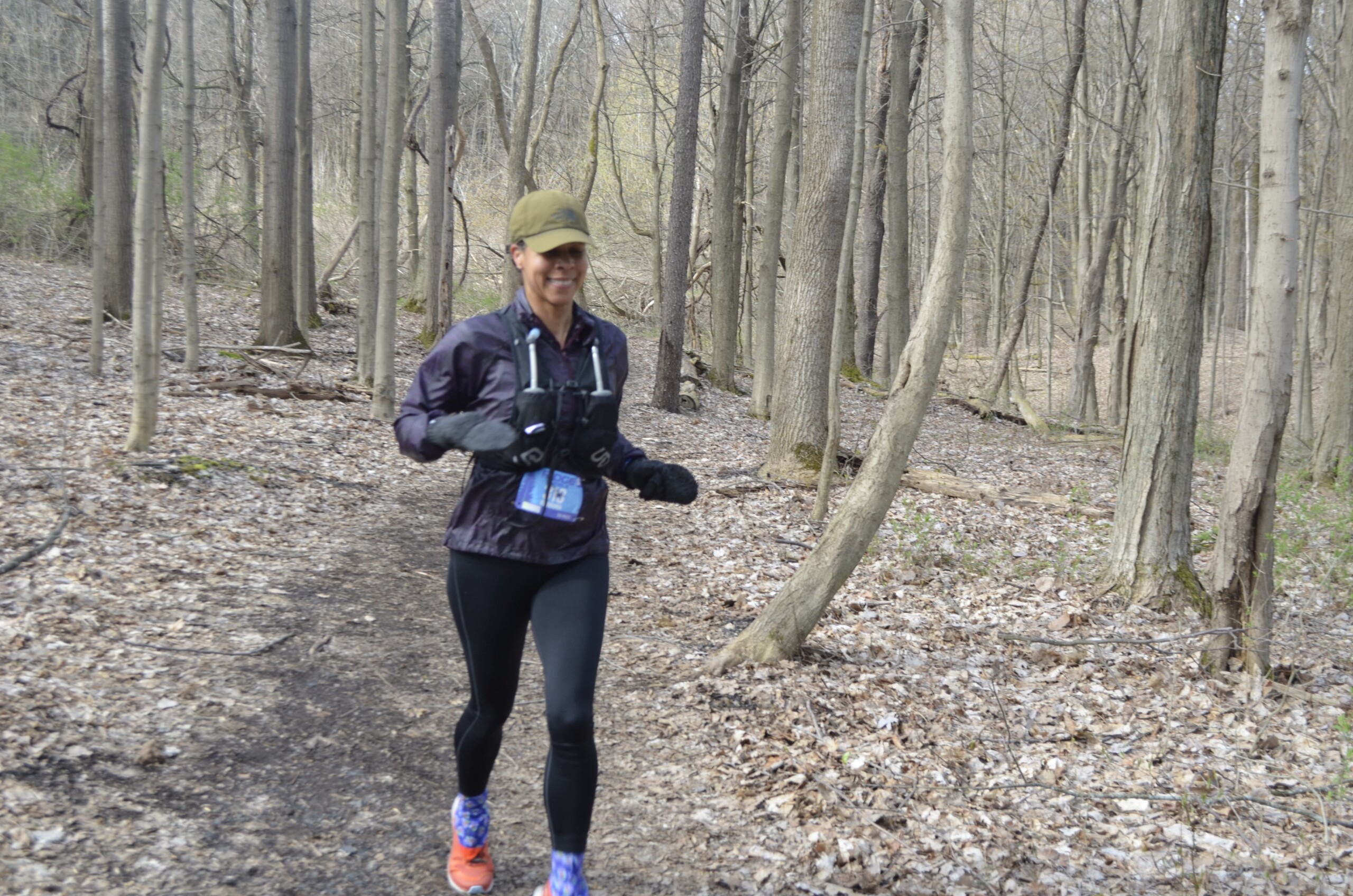 The Joy Of Running Ultramarathons

Kuwanna running the English Ridge Rumble Recently, I was reminded