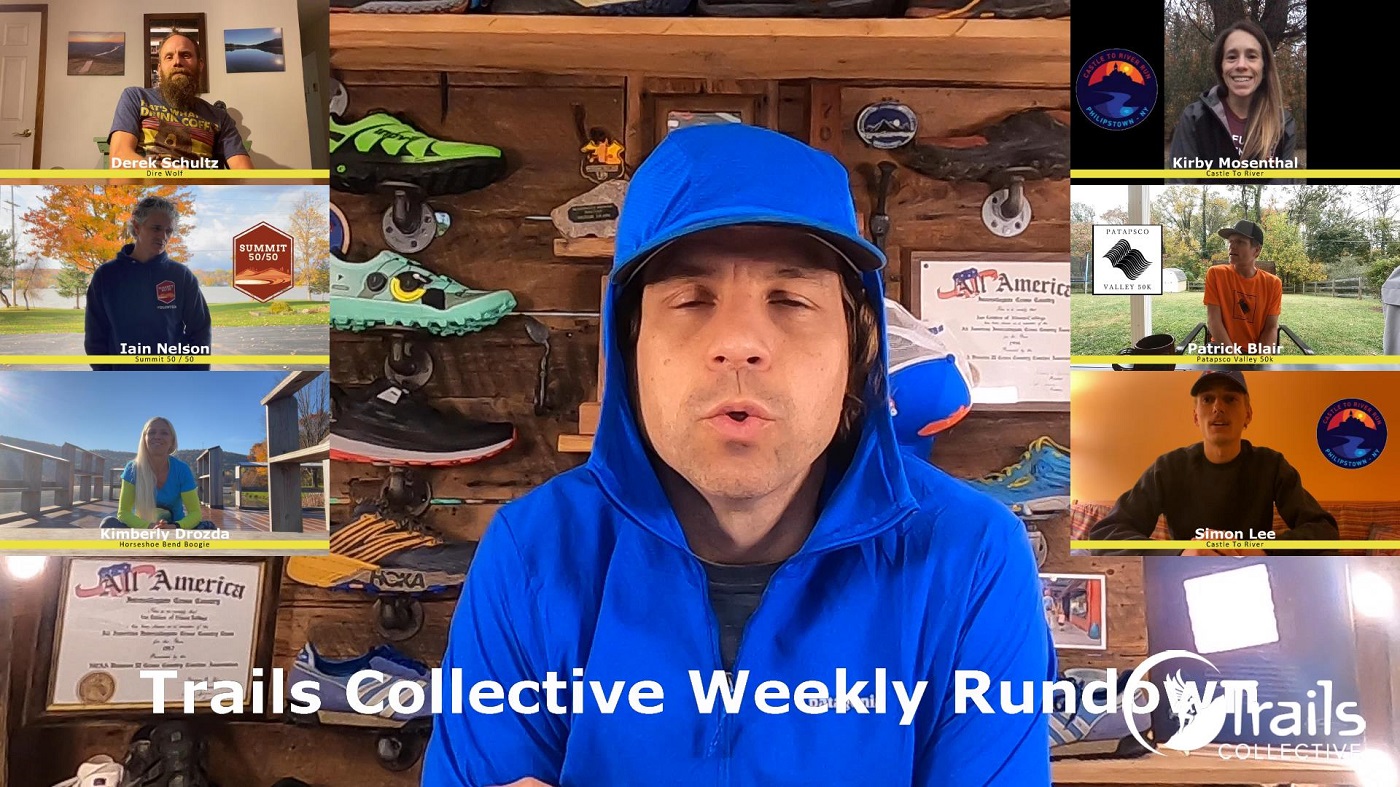 This week I dig a bit into one of my favorite and most used apparel pieces at the moment, the Patagonia Airshed Pro Pullover. I also comment on the Salomon UltraGlide, a long-awated, delayed, and scarce max cushion new release from Salomon.

A seasonally appropriate episode (161) dropped from the crew at Cultra. This week: Leaf Catchassing with weighing in on the latest gear for leaf catching on the run.

Another that caught my eye was Running Times with Gagz October 7th Episode titled the Medicine Man. Gagz connected with Brian Wilford, Head Medic for Destination Trails and the Triple Crown of 200’s, and consultant for the Cocodona 250. Somewhat retired, he travels cross country in an RV with his rescue dogs from one big mountain ultra to the next. It being personal, Gagz refers to him as the best “Cut Man in the Business” after saving his race at the Tahoe 200. Listen in: https://podcasts.apple.com/us/podcast/the-medicine-man/id1521906608?i=1000537804380

NCR ½ and Marathon slated for November 27 in Sparks, MD is 91% full with 39 spots available. In the Trails Collective lineup of flat and fast events in the Northeast.

Patapsco Valley 50k in Baltimore, MD (emailed Patrick Blair, men’s winner / received) – a beautiful gem of an urban area resource, Patapsco Valley State Park has a ton of trails including beautiful singletrack, and a few stretches which feel remote, if only for fleeting moments. It doesn’t appear results are yet but the White Oak crew were able to connect me with overall winner Patrick Blair of Catonsville, MD. Patrick finished 2nd in 2020 in 4:20, a bit under 3 minutes out of 1st. No doubt he was back this year on a mission to go for the win, and that he did.

The Event Which Shall Remain on the Down-Low – NJ

Reluctant Runner Racing staged the inaugural Summit 50/50 in Allegany State Park. 25k wins went to Alexander Rossbach and Jessica Weinman, Kyle Dick and Margaret Frank in the 50k (a tight finish there for the women’s win with Margaret edging out second place finisher Hanna Garty by 18 seconds), and in the 50M, James Pergolizzi and Jenna Piechowicz for the men’s and women’s wins in 8:56 and 11:08. Giving us a deeper view into Summit is RD Iain Nelson.

Castle to River uses beautiful and runnable trails on the Hudson Riverside flats and Hudson Highland State Park hills of Garrison, NY. A good piece of history, the course follows part of Benedict Arnolds escape route. It also was able to return to a passing of the namesake Osborn Castle. 5k wins went to Erik O and Katie Gulley, and in the Half to Simon Lee and Kirby Mosenthal took the men’s and women’s wins in the Half in 1:38 and 1:41 respectively. There was a bit of navigational hiccupping during the event so distances and times are a bit relative this year. Women’s winner Kirby is here to give us a bit of that shakeout.

Dire Wolf is a 10 miler run by and supporting the Octorara Cross Country Team Booster. It’s a solid mix of hills, rocks, roots, and rugged descending, and a creek crossing. This year, their 7th annual, saw a solid turnout. Taking us deeper into Dire Wolf is winner Derek Schultz.

Toeing the line between road and trail with the hilly gravel terrain, Tussey is a regional event with some history. Being the USATF Road 50M champs a number of years it has a pretty fast track record with a W’s CR of 6:24 set by Cassie Scallon, and M’s of 5:28 by Matt Flaherty, both in 2013. This year’s overall and men’s win went to Charles Rmillard in a speedy 6:20 with Miquela Ingalls 5th overall and on top for women in 7:22.

In the 10k Brent Trail and Jordan Hausladen took the respective men’s / women’s wins over a field of 86. In the Half Robert Motrynczuk and Emily Jamison in a field of 54. And, in the 50k Sean Simmons took the overall win in 5:34 with top woman on the day 4th overall in Kayla Perry in 6:35 with 23 finishers. To be seen on the growth of Spartan Trail. I’m not sure of the configuration of the weekend, but I believe there were typical Spartan OCR distances running as part of a larger event. But, with “thousands” of spartan racers as stated in their media, the bit under 200 doesn’t come close to the target. What do you think of Spartan and whether as a larger corporate and social entity, whether it’ll find the same level of success it’s owned in OCR? To those out there who may have participated, how was it in course, atmosphere, and production?

Events This Coming Weekend in the Northeast Trail Running World

8 Hours at the Farm in Brookfield, CT

Fire on the Mountain 50k in Little Orleans, MD

The Hamsterwheel – 6h – 30h running on the Hillsborough County Fairgrounds in New Boston, NH. Going in with a bit under 300 entrants strong with the largest singular field being in the 30h wherein it looks like it should be a solid battle for the women’s win.

Fall Back into the Trails 10k & 50k in Lagrangeville, NY

Moreau Half in Gansevoort, NY

Cross County Trail Marathon and Half in Springfield, VA