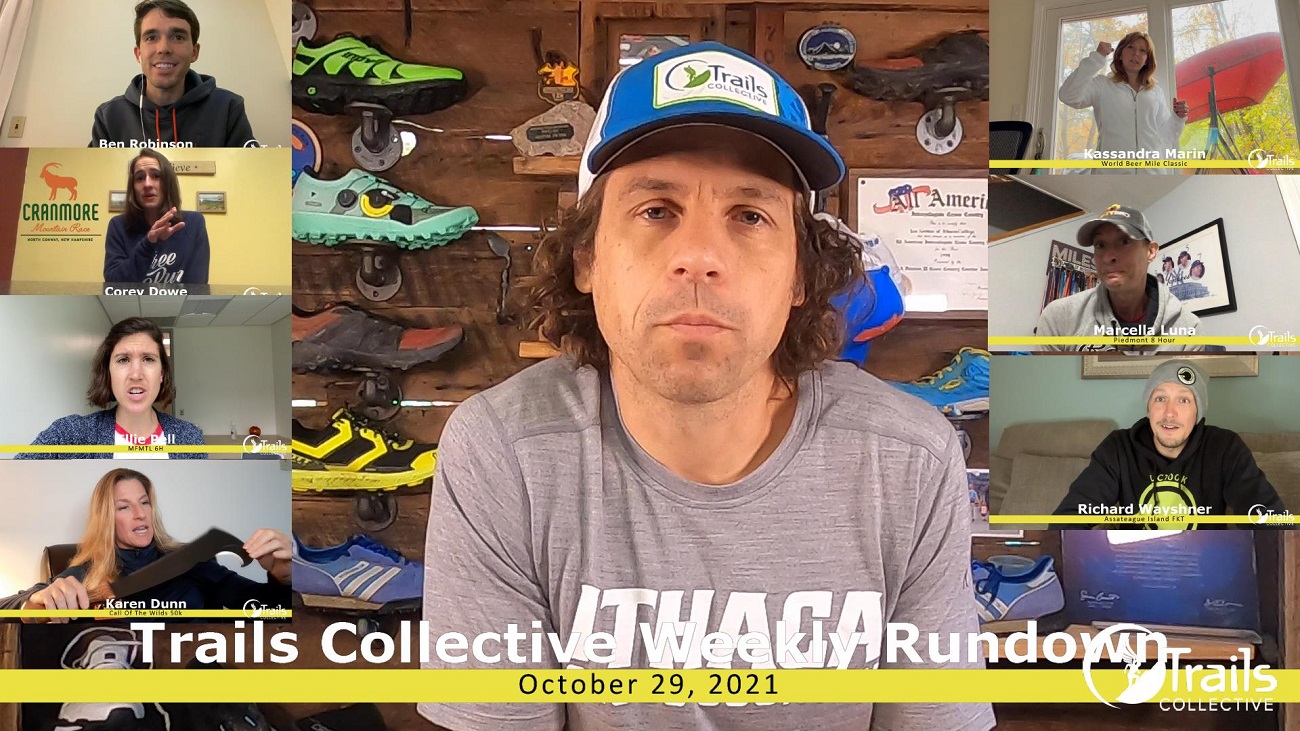 The Week in Northeast Trail Running

FastestKnownTime.com released Podcast Episode 160: Max King: Does he have the widest range of any runner ever? Max is a friend with solid NE connections. While at Ithaca College, he was a few years behind me at Cornell, also a Steeplechaser…though, much, much faster, his wife Dory grew up just South of Ithaca. He’s a great individual, a phenomenal runner and athlete, and I’m looking forward to checking out the Podcast while traveling this weekend.

Liz Archibald, 1h 18m for the 6.5 mile Mount Agamenticus 3 Peaks, gaining 1,200’ with some nice ridgeline views. Liz knocked 18 minutes off the prior mark from March of this year.

Sharon Knorr, 9h 4m for the Franconia Notch Loop, a beautiful beast that offers 9,047’ of gain over 23 miles. This is an opening women’s unsupported mark.

Jeff Craven, 42m 34s for the 4.5 mile Springfield Trail taking 1 minute and a half off of Stephen Eland’s time from October.

Ben Feinson, 7h 25m for the 4.9 mile Iron Cross configuration on the Camel’s Hump, stated to be Vermont’s wildest and most beautiful summit at 4,083’. This is an opening men’s unsupported mark.

Bimblers Bluff 50k in Guilford, CT (Tony Bonanno), a course connecting a handful of forest preserves and used to promote access to woodland trails in CT . Of 106 finishers Ian Connell took the overall win in 4:21 with Ella Carr the women’s field in 5:56. Here to give us a better picture of the Bluff is CT’s Tony Bonanno.

Joe English Twilight Challenge 6h in Amherst, NH. Hosted by the Amherst Land Trust and Freestyle Farm, the Twilight Challenge with runners covering a 2.6 mile loop solo or in teams for up to 6h. Of the 6h marquis, with 54 entrants, Julia Huffman took the win with 15 laps for somewhere around 35 miles. Mark Nelson took the marathon win in 4:42, and JD Lavallee the half in 1:34.

Acidotic Racing’s Cranmore Mountain Race, ranked 5th toughest 10k in the NE, ran at Waterville Valley on October 15th (I missed it last week). This is a New England gem. 2 loops totaling 6.2 miles with 2,400’ of gain set on a beautiful mountain. Of 129 finishers, Brandon Newbould took the overall win in 49:43, edging second place Stephen Kerr by 7 seconds. Corey Dowe was 4th overall and for the women’s win in 53:46 with Kassandra Marin in second in 58:54. Here to regale the day was women’s winner, the wicked tough Corey Dowe.

MFAMTL 6 Hour went down using a 1’ish mile loop along ponds ripe in fall foliage in Durand Eastman Park in Rochester, NY. Of 44 finishers, Ellie Pell came back out of the finished shadows to nab the win with 32 miles ahead of Pete Kresock. Here to give us a bit of Maybe the Last 6H flavor is overall and women’s winner, Ellie Pell.

Clark 6 Hour Classic, put on by Salt City Sports at the Clark Reservation in Jamesville, NY, uses a 1.7 mile mixed surface loop. They had 52 finishers for their 3rd running, with Patrick Hallahan followed by Thomas Joslin emerging on top for the men with 37.4 miles, and Rhonda Bullard 3rd overall and first women’s finisher with 35.7. Rhonda’s finish establishes a new women’s course record, surpassing her own mark from 2019 by 1.7 miles.

Call of the Wilds Mountain Fest 50k in Waterville, PA. Of 87 finishers, Ben Robinson had another solid day on the trails crushing the prior 50k course record for the win in 4:28. Over a course offering over 9,000’ of elevation gain, and some technical terrain, that’s flying. COTW 50k comes up as 2nd in my ranking of NE 50k events by toughness. The 50k women’s win went to Karen Dunn in 6:01, also a solid time. In the 25k, ranked 3rd toughest 25k in the Northeast, of 134 finishers, Joe Nardo took the win in 2:44 with the women’s win to Lisa Fisher in 3:04.  (Ben and Karen)

Survival of the F.I.T.Test 24H Trail Ultra in Cumberland R.I.

Piedmont 8h Run uses a 2.6 mile field and forest loop in Powhatan, VA Of 50 finishers, Trey Windwehen covered the most ground with 48 miles, with highest grossing female at 41.1 achieved by Lillian Thomas, Rhonda Maxwell, and Marcella Luna. Here to cue us into the Piedmont 8 hour, and her first time, of several finishes, cresting 40 miles, Marcella Luna.

Events This Coming Weekend in the Northeast Trail Running World