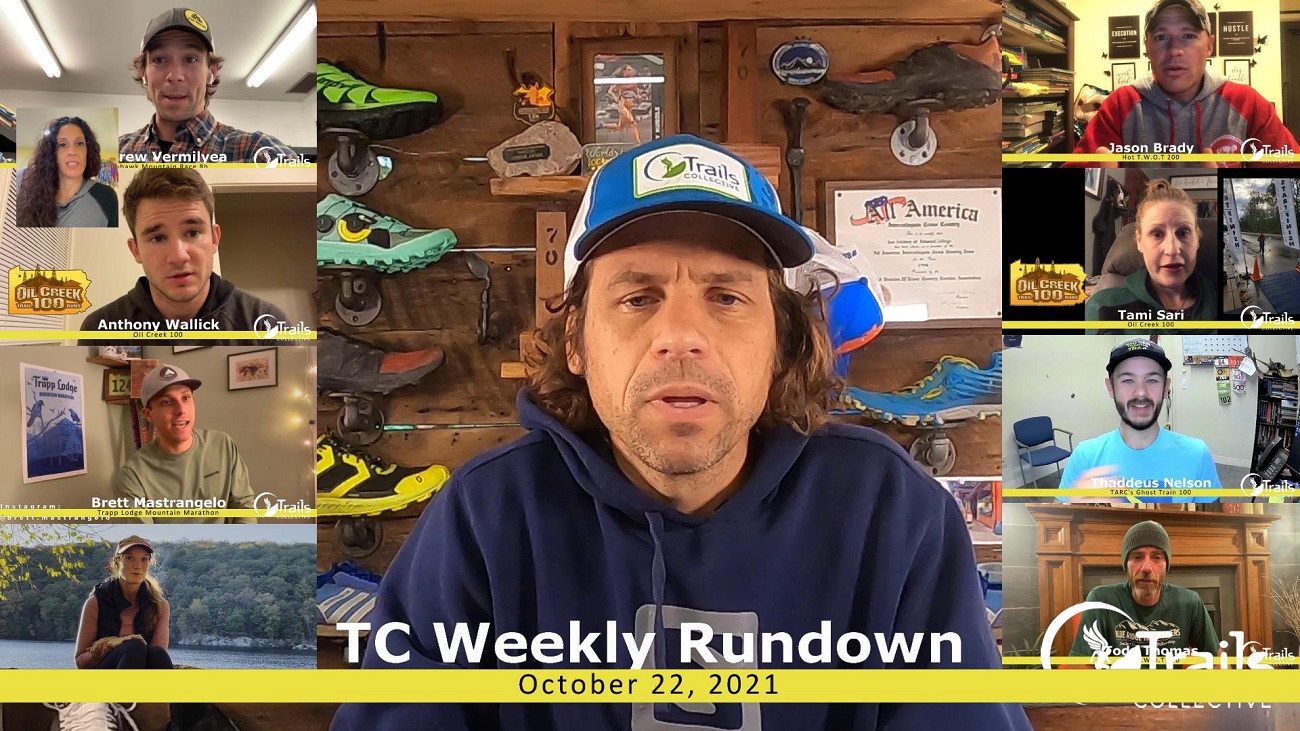 CT Trailmixers Fall Fling 400, slated for November 20 in Southington is at 96% full.

Christof Teuscher, 3d 9h 50m for the 148 mile Cohos Trail, running the rugged wilds of the Whites from Crawford Notch up to the Canadian border. This takes nearly a day off of Eli Burakian’s mark from 2019.

Katharine Spector, 1d 2h 24m for the NY portion of the AT – NY AT Clip

An event in the Steep Endurance lineup, Mohawk mountain challenges runners to ascend and descend the ski mountain slopes for 5k, 10k, or 8h intervals. With 1,405’ of gain over a 1.1 mile circuit, it ranks 4th in the TC lineup of toughest 5k’s, 2nd in 10k and Time Divisions, in the Northeast. Of 44 in the 5k, Kenneth Berardi and Shannon Pinkowski took the top spots, of 35 finishers in the 10k the win went to William Drew and Sherri Odell. The total glutton for punishment 8h division, Andy Vermilyea covered 32.2 miles with 16k elevation gain en route, for the overall win with top women’s finish going to Caitlin Rossi with 21.9 miles.

Clips in from Shannon Pinkowski and (?) Andy Vermilyea

TARC’s Ghost Train first entered my radar in being one of Jim Lampman’s annual pilgrimages, and I plugged it in the Trails Collective lineup of flat and fast options in the Northeast in a couple distances. With only 45’ of elevation gain per mile, running on the 7.5 mile out (and 7.5 mile back) Granite Rail Trail, this is a gem for a great community, fast or first finish. I’m not yet seeing results posted for their 12th edition but we do have this clip in from Thaddeus Nelson to give us further Ghost Train flavor. MassUltra photos on Ghost Train: https://massultra.com/2021/10/18/photos-2021-ghost-train-rail-trail-race/

– Clip from Thaddeus Nelson from the Ghost Train 100

The South Mountain Conservancy puts on the Mayapple trail runs, offering a kids 1 mile, 10 & 10 miler, and 50k. The course uses two 10 mile loops ranging from a tinge of pavement to technical singletrack with 1,500’ gain over the two loop combination. Winners on the day included Hogan Dwyer and Stephanie McCartney in the 10m, Jianhui Shen and Lora Liu in the 20m (Lora establishing a new women’s course record), and Justin Frankel and Kelly Evernham in the 50k.

A fundraiser for It’s a Ruff Life Rescue, the 5th Trails4Tails 50k went down using the Washington Crossing Park with a 1 mile run run, 5k, 5k Canicross, 15k, and 50k. That’s all to say, I think it happened as distances are conflicting on sites, and no results are listed. But, if it did, hopefully it was a success.

Fred’s run makes use of 2.1 mile variable surface loop. With 52.7 miles covered, Ryan Clifford took the overall win, with top women’s finish on the day going to Jodi Kartes-Heino with 34.3.

Sinnemahone is a 3-part race consisting of a canoe/kayak in April, a gravel bike race in September, and the trail run portion in October. Looks like it may have been wet with temps dropping, but hopefully otherwise a good day. Benjamin Kauffman and Sarah Colwell took the 50k wins. I think…the results format is a bit baffling and my suggestion would be to update that for next year as it’s confusing. I can’t tell what’s going on if anything on the 25k or 12k.

Oil Creek is a solid long standing ultra running in western central PA. Titusville is literally the birthplace of the American Oil Industry and is the site of the world’s first commercial oil well. The 50k-looping course offers roughly 15,000’ of gain according to our average of measures, and comes in 10th toughest in the Northeast, both pulled from the Trails Collective ranking and article. A great option for first-timers and those looking for a great community event.

We have two clips in this week to report in on Oil Creek.  The first, from women’s 100 mile winner Tami Sari, an individual who was cutting her trail and ultra chops on the 50k years ago, and has worked her way not only in distance, but now, for the 100 mile women’s Win. And, the second, Anthony Wallick, third finisher in the 100 mile, and honing in on the experience of not just this year’s crazy, but doing on the heels of two DNF’d attempts prior – Clips from Anthony and Tami

Andy’s Backyard Ultra in Earlysville, VA. With 370’ of climbing over 4.1 mile loops, the course was honest. Last person standing of somewhere around 60 starters was Roy (Jamey) Travelstead of Salem WV with 120.8 miles or 29 laps, with the assist from Rick Kwitkowski from Earlysville with 28 laps.

Conquer the Mountain was an inaugural event run out of the Bryce Resort and put on by the crew at Rev3 Running. The course mixes in 15 miles of mountain trail, 10 miles of gravel road, and 5 miles of pavement. The hope, to provide an opportunity to be immersed in a course rich in fall foliage. Hopefully it was a beautiful day on course. Of 75 finishers with the overall men’s and women’s wins were earned by Will Gillette in 5:40 and Beth Freymiller in 6:54.

Cloudsplitter is a beautiful and challenging course run in the Cumberland Mountains in southern Virginia. “Although parts of this region have been developed, strip mined or heavily logged, High Knob remains relatively untouched, and it is home to some of the greatest diversity of plant life in the Commonwealth of Virginia, making it a true ecological treasure. The unique trails on High Knob pass through dense forestland dotted with cliffs, water crossings, waterfalls, rock shelters, rhododendron thickets, caves and enormous sandstone boulders. This is one of the more physically demanding trails in the East, and it remains a significant unprotected wilderness area. On a clear day, four other states can be seen from the High Knob summit: West Virginia, Tennessee, Kentucky and North Carolina.”

Of 59 finishers in the 100 mile, ranked 7th in toughest NE Hundreds in the TC ranking, Mika Thewes, hailing from Golden, CO, had an incredible run, taking not only the overall win, but women’s course record as well in 22:37. Second place finisher Steve Campbell of Richmond was top male and second overall. In the 100k, also coming 7th in our ranking, the overall win went to Clay Hickman in 14:54 with top female spot going to Mrissa Knodel, 3rd overall in 19:24. Of 55 in the 50k, Noah Baily and Crystal Holden took the respective men’s and women’s wins, with John Pack and Nancyann Hickman on top for the 25k.

Noland Trail 50k in Newport News, VA. The only event run on the Noland Trail in the Mariners’ Museum Park, the course uses a 6 lap format and with start times based on finish time projections. My shout out for one of the few events going with a Pirate theme and logo. Of 44 solo finishers the men’s and women’s wins went to Steven Keller in…well, I’m not sure as there’s an hour’s lag or delta between the gun and chip times. That must be a pretty stout distance between where the starter fired the gun and where the timing mat was position, or, having to do with the projected finish / start time concept. Damned Pirates…can’t trust them. And Megan Schulze for the women.

The TWOT uses a 28.2 mile rugged loop in the George Washington National Forest of VA. Not only is the route burly (it gains roughly 7,000’ per loop, and as evidenced by this photo of the 3D printed loop profile), but the “event” (in quotes as it’s a bit more of a fat-ass style) uses no supplemental markings, aid, and no crews are permitted. We ranked the winter edition as the toughest 100 miler in the east and other distances aren’t too far off, nor is the Hot / Fall edition. To take us deeper into TWOT we have two finishers who laid down incredible efforts out there. Jason Brady, and Todd Thomas. Fellas, take us inside the TWOT.

– Clips from Jason and Todd

An inaugural event with a solid sounding feel, camping the night prior, spending a day on October Vermont resort trails, Run It You Won’t made use of a 4’ish mile loop with 2,500’ of gain per loop. That’s pretty ridiculously stout! In the 4 mile hammer fest, of 9 finishers Ben Lustgarten and Christine Natalie took the men’s and women’s wins. In the 6h, Emily Potter took the overall win with 19 miles covered with Brian Bauer top male in second overall with 14. For the 12h, Eric Christman took the overall win with 38 miles. A shout out to my friend and former employee Kurt Huebner for a second place showing also with 38 miles. And, in the full plate 24h, Josh Rollins and Vanessa Rodgriguez with 87 and 63 miles covered.

The Runamuck 50k, offering 4k of elevation gain, running over dirt roads amidst Vermont’s October foliage, sounds pretty sweet and a great workout opportunity, if not hammering. Of 48 finishers Bobby McDonough and Rebecca Burke earned the men’s and women’s Saturday wins in 3:52 and 5:12 respectively. Answering back on Sunday’s 50k running, Saul Ramirez and Dylan Broderick in 3:48 and 4:23.  Clip from Becky Burke?

Now in their 4th year, Ironwood Adventure Works’ Trapp Lodge Mountain Marathon is another beautiful fall event amidst October foliage in Vermont. The 13 mile loop course is 2/3 doubletrack and dirt roads with 1/3 rugged singletrack. 2021 saw 81 finishers in the full with Brett Mastrangelo setting a new course record in 3:25, and Lucy Skinner finishing 3rd overall for a women’s win in 3:58. For the Half Trapp brought in 307 finishers. Pretty outstanding, up roughly 25% from 2019. Jason Lippman took the win in 1:41, only 5 seconds ahead of Anthony Staples…close. For the women, Carmen Bango hammered out a 1:47 to set a new women’s course record by a slim 9 seconds. – Clip in from marathon winners, new course record holder Brett Mastrangelo (**plug Instagram handle) and(?) Lucy Skinner.

Events in the Weekend Ahead

Survival of the F.I.T.Test 24H Trail Ultra in Cumberland R.I.

Call of the Wilds Mountain Fest 50k in Waterville, PA