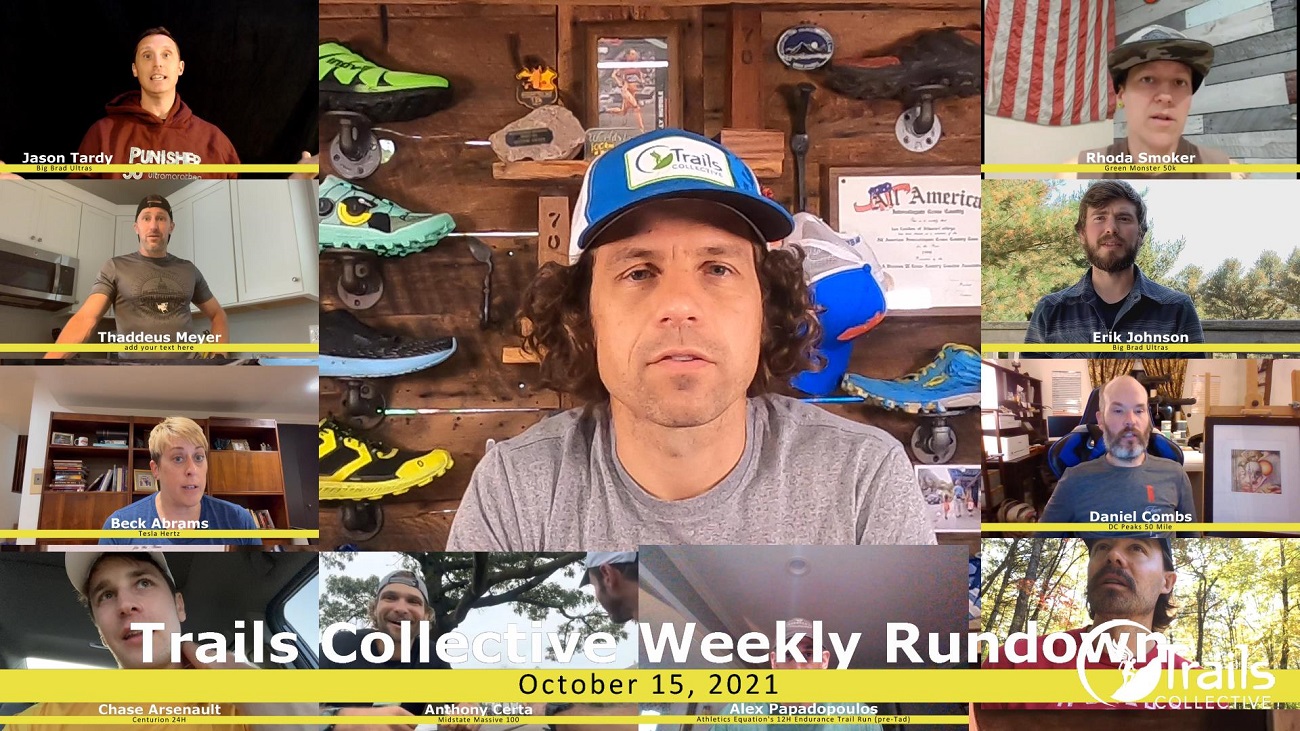 After a 130 mile week in August, Jimmy Mac begins to consider running again.

DC Peaks 50 a first-year event run in the Wasatch range outside of Salt Lake – Blizzard brought in 12” – 18” of fresh snow, stiff winds, and a drop in temperature. 70 participants descended to a lower AS for evac on their own, a dozen or so brought in via SAR. There’s a good article on iRF and where the comments below are as good as the article itself, including from participants. I was able to connect with one participant, Daniel Combs and will have a clip in the Results & Voices lineup later in this episode.

What I Built podcast with Wayne Eddy (Inov8): https://overcast.fm/+YsrZiFXhw

The Patapsco Valley 50k – One I really enjoyed running and filming in ’19, is slated for October 30 outside of Baltimore is showing as 100% full. At time of filming there are 3 spots remaining. https://ultrasignup.com/register.aspx?did=83885

The Last Squatch Standing – Slated to run on October 30th andusing a 1 mile loop in the South Mountain Reservation in West Orange, NJ. Roller Derby tactics expressly indicated to be not permitted.Rocking out is. Only 7 spots remaining as of Tuesday. https://ultrasignup.com/register.aspx?did=80691

Stephen Eland, 1h 4m for the Delaware Lowest to Highest. Going from the Delaware River to the State’s highest point at 448’, for a 670’ rise over 8 miles. Stephen’s time shaves 11 minutes off of the prior best set by Matthew Matta in January of this year.

Katie Clayton, 3h 54m for the Camden Hills, a beautiful sounding 19 mile loop with 4,300’ of gain. The Description: Camden Hills State Park is renowned for the panoramic view of Camden Harbor and Penobscot Bay from the top of Mt. Battie, which inspired Edna St. Vincent Millay’s poem “Renascence.” I was going to read you said poem, but found it to be, well, really long. Look it up.

Paul Jacobs (VHTRC) – 13:44 at Canal Corridor (2nd fastest men’s time in the history of that event and flying)

Centurion, a 24h event used a 3.25 mile loop of sorts in, I think the Roosevelt Forest, in Stratford, CT. It’s most known for introducing me to the word “Resfeber”, a Swedish word meaning “the restless race of the traveler’s heart before the journey begins, when anxiety and anticipation are tangled together. Here, to cue is into what came after the Resfeber, and deeper into the inaugural Centurion 24, overall winner, with 100.75 miles covered, Chase Arsenault.

Of 202 finishers, the overall 5.22 mile men’s and women’s winners on the day were Michael Hohl in 41:06 and Cheryl Scholl in 44:10. A solid showing in the 8H as well with 125 finishers, with Michael Hohl again on top with just under 47 miles covered for the men’s win, and Adeline Ntam with 36.5 miles covered.

The Big Brad Ultras, running in Bradbury Mountain State Park, in Pownal Maine, have been on my radar since their first running 2012, and after a few of the Trail Monster crew made the trip down to the Virgil Crest Ultra’s around that time. In passing through in a return trip from Nova Scotia one summer I pulled off to run the course, finding it nice and flowy.

This year we’ll have Erik Johnson, finishing in what looks like a wicked tight race for 4th in the 50k, and Jason Tardy, finishing his first 50 mile, to dig us deeper into Big Brad.

The Midstate Massive Ultra Trail’s 30m, 50m, 100m, based in New Ipswich, NH, span Massachusetts with border crossings in NH, RI, and CT. Now in their 3rd year, each of the distances appears to be growing well in field size. There were also some fast times run. Of 71 finishers in the 100M, Nicholas Wirz took the overall 100M win and second fastest time in course history with a 20:15, and Kate Olson setting a new women’s course record in 22:43. Kate hails from Studio City, CA and I’m really really hoping that, at age 35, that that means maybe she’s one of the Olson twins. Fortunately, stalking her Facebook, it appears she’s much cooler, and tougher than those twins. Nice work Kate.

Of 52 in the 50M Chris Crowley and Maia Madison took the men’s and women’s wins in 8:29 and 9:37 respectively, Maia crushing the women’s course record mark by over an hour. And of 45 in the 50k Flora Berklein outran Nick Pavlovsky for the overall win in 4:56 vs 4:58.

Taking us deeper into a feel and visage of Midstate Massive, 100 mile finisher, Anthony Certa.

Vulcan’s Fury, running in Nottingham, NH, is another updated gem under the direction of Six03 Racing’s Tom Hooper. Myself, wife and one daughter were registered to run, but with my daughter running XC, and me coaching, it didn’t end up in the cards. Running over once was the site of an active volcano, it looks like a sweet course though with a signature boulder scramble.

To cue us in to the course and day at Vulcan’s, winner and new course record holder on his home course, Nottingham’s Brandon Newbould.

NJ Trail’s One Day, run at a fairgrounds in Augusta, NJ, uses the same 1 mile course / format as the Series’ 3 Days at the Fair, I find myself a bit confused, as, despite the name one-day, the One – Day event offers 6, 12, 24, and 48H options. Last I counted that makes it a Two Day. But maybe I’m missing something, and, well who’s counting? Kieran Williams and Jessica LeMay took the men’s and women’s 48H wins with 157 and 142 miles respectively. A shout out to CULTRA’s indefatigable Fred Murolo with a stout 102 miles covered. Serge Arbona and Melissa Gill in the 24H with 126 and 95 respectively. In the 12H, Christopher DeLucia with 67 (special shout out to Gagz on his heels with 64) and Helen Clark with 43, and in the 6H, Tom Lynam and Jessica Marsico with 41 and 5:46. There was a marathon and 50k as well but I’m tapping out on announcing divisions.

Tesla Hertz Run’s 50k, 50m, 100k, 100m, run in Rocky Point, NY and using a 10 mile Greenbelt Trail loop in the Pine Barrens of Long Island, are put on by Vinny and Nicole of Happily Running. The course runs an area steeped in Nikola Tesla radio tower history. This is another one with a bunch of sub races. Instead of running through each, we have the link plugged, and will instead jump to getting a word from the ground. This round, Trail Sister Beck Abrams, 50 mile finisher, sent in this clip to provide a bit of Tesla flavor.

The Fanny Pack 50k appears to be a solid Fat Ass style event option run over two 10k loops out of Ohiopyle, PA. No results listed, but, hopefully they maxed out the field at 50 cuz who doesn’t want a custom fanny pack as a finisher’s award?

Green Monster, put on by the Tyoga Running Club in the mountains of the Tioga State Forest outside of Wellsboro, PA, is a gem. I’ve heard nothing but good things about this event over the years and I believe it’s one that cap’s out. A piece of their description: “You will be confronted with beautiful rolling single track trails, hellacious steep climbs, abundant stream crossings, and some gnarly technical descents – all of which add to your wild experience and the joy of dragging your haggard soul across the finish line!”

Of 108 in the 15k, Edward Schroll and Isla Twoey emerged on top. In the 25k, Ernest Glick and Kim Harris. And, in the beast of the day, Ian Nolon and Rhoda Smoker for the wins. Here to take us a bit deeper into a view of the Green Monster, women’s 50k winner Rhoda Smoker.

The High Bridge 30k and 50k run point to point on the scenic and historic High Bridge Trail in Pamplin, VA. Going point to point over flattish crushed gravel makes for a fast course option. In the 50k, winners Lee Jarvis and Danielle Jewkes were a bit off the course records, but still quick in 3:38 and 4:20 respectively. In the 30k Juan Gonzalez and Devon Genua took the wins.

The TWOT, Hot edition, are rugged beasts of courses, ranked by the Trails Collective as some if not the toughest in their distance divisions in the Northeast. The 25 mile loops are tough. There are no supplemental markings or aid stations, crews or pacers. I’ll keep an eye out for word on results and plug them into next week’s Rundown.

The Devil’s Den trail runs offer 6 mile, 12H, and 24H options run at Wrights Mountain in Bradford, VT. Details are scant as were the finishers, but it looks like a beautiful day to be on trail in Vermont.

DC Peaks was in inaugural point to point 50 run in the Wasatch range outside of Salt Lake. With 11,700’ gain, with an elevation high point of around 10,000’, and an average elevation of 6,604’, the course is stout and beautiful. The organizers were looking to bring live footage and tracking. Given what went down weather-wise, that was a good thing. Here to take us deeper into how that shook out is participant, Arizona’s Daniel Combs.