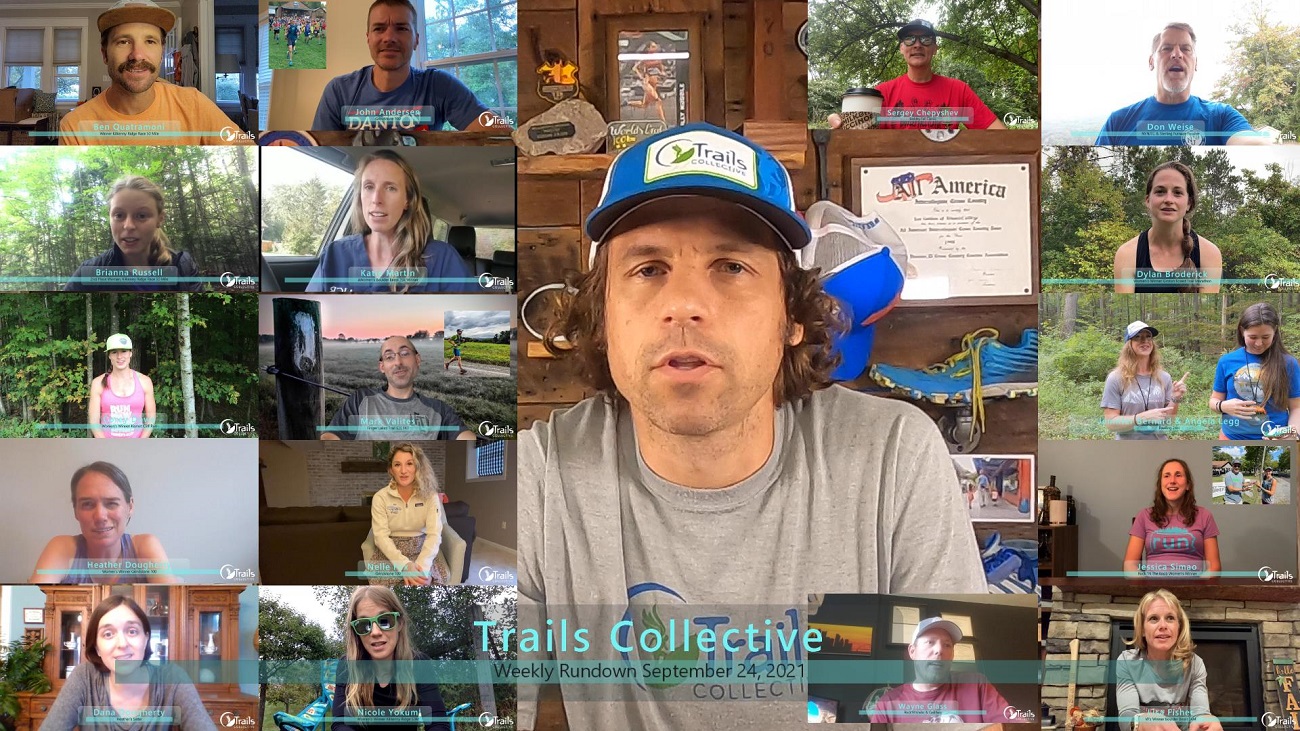 More story time than media, Allegheny Trail Runners, RD, and volunteer for many, Ben Mazur cued me in to a pretty wild occurrence going down on the Rock ‘N the Knob course as they prepped about a month back. Here to take us into that fireside chat on a pretty ridiculous situation is Wayne Glass. Wayne, regale us with the occurrence of the mountain Cadillac.

Barry Howe, in one that I missed or wasn’t posted last week, 1d 5h 6m for a men’s supported mark on the burly Hundred Mile Wilderness, a section of the AT said to be considered the wildest on the AT chain. Barry’s time takes an hour off Rob Erskine’s mark from 2013.

Forgotten Forest, a 9 Hour event in the Roosevelt Forest in Stratford, CT ran it’s sixth edition. I gotta say, the UltraSignUp event photo reminds me a little bit of Blair Witch and creeps me out a bit. Of the 43 finishers who it didn’t, Laura Becker took the overall win with 50.601 miles covered, with top fella going to Tyler Pineau losing the lean at 50.60 covered.

Boulder Beast 25k and 24 miler, a PA Trail Dogs event running in Lock Haven, PA. We have the Beast at #9 in toughest trail marathons (https://trailscollective.com/?p=28754) in the Northeast with 5,372’ gain in 24.7 miles some with a bit o’ technicality. For results on the day, of 272 finishers in the 24 miler, young gun Reagan McCoy took the overall win in 3:56 with Lisa Fisher on top for the women in 5:05. Of 190 finishers in the 25k Jeremy Johnson emerged on top in 2:39:08, just under a minute below the prior course record to establish a new men’s mark. First woman on the day went to Katie Martin. I’m thankful for both women’s winners, Lisa Fisher, and Katie Martin, for coming in with these clips on the Boulder Beast and their days out there. Lisa, takes us through the signature Boulder field, variable terrain, and most excellent community. And Katie, on your day out there and nailing the base on new baby stroller training.

Rock’N’ The Knob, billed as PA’s Highest Trail Race, and put on by Ben Mazur and the Allegheny Trail Runners, went down in Claysburg, PA. The 10k, rated toughest 10k in PA according to our rankings, and offering 1,496’ of climbing had 85 finishers with Steve Templin and Jane Hallinan on top for men and women. The Half ranks in at #8 toughest in the Northeast. Of 59 Half Marathon finishers, AJ Kelly and Stephanie Daniels were 1, 2 overall and top for men and women respectively. And for the big momma, the marathon, ranking in at #7 toughest in the Northeast, with 6,750’ of gain, of 57 finishers Dave Endress and Jessica Simao took the men’s and women’s wins. To weigh in on the event, King of the Allegheny’s and men’s 4th place finisher, Aaron Keckley on the series, and getting owned by Rock ‘N the Knob whether you intend to or not. And top woman on the day, Jessica Simao on begging for the hills to flip and winding us through an honest tough course.

Kismet Cliff’s Half Marathon and the Little Beast 5 miler, put on by Tom Hooper and the crew at Six03 is one of my top bucket list races. I was scheduled to race this year, but, well, life sometimes gets in the way. Of 121 finishers in the ½, Joseph Carpenter took the win in 2:27 with first woman and second overall going to Corey Dowe, coming in 2:30:54, missing the money mark by a scant 55 seconds.  Of 48 finishers in the 5 miler, Nicholas Ring took the overall win in 52:11 with top women’s mark going to Adah Chapman in 59:32. Here to take us into her Kismet, on sending a bit out of your comfort zone, the mountains, and almost the money, women’s winner Corey Dowe

Kilkenny Ridge Race, a trip through the rugged white mountains’ North Woods Region. Dense foliage, slick and technical footing, and over 15,000’ of elevation gain have this as #2 toughest 50 in the Northeast (https://trailscollective.com/?p=28770). Here to give us a more visceral feel for Kilkenny is Nicole Yokum, barely missing a new women’s course record, but extending an amazing year crushing some of the toughest mountain ultras in the Northeast. Nicole, you’re awesome…take us deeper into Kilkenny. And, with an impressive overall win on the day, Rhode Island’s Ben Quatromoni, coming in on post Eastern legs, with an appreciation for the toughness of the course, and those out there making it possible. And, Brianna Russell, with a deeper connection to the White’s than most, and racing with that foundation.

Sterling Furnace, a wonderful event used to raise money for the park and New York New Jersey Trail Conference ran in Tuxedo, NY. Of 46 finishers in the ½, John Freeman and Christa Tyler took the overall men’s and women’s wins, with Mason Crow and Kathy Herbert over 16 in the 15k. Taking us deeper into not just the event, but the amazing entity which is the New York New Jersey Trails Conference, crux trail supporter and finisher, Don Weise.

Conquer the World Endurance’s Pawling 24H Running Festival 3,6,12,and 24H options ran using a 1.7 mile loop in Pawling, NY. Year two of the event saw event records fall with Luke Korinek and Jennifer Bernard top 24H finishers with 89 and 80 miles covered. In the 12H Fran Gage and Wayne Bianchetta were top female and male with 48.7 and 40.3 miles covered respectively. In the 6H, Dan Marchese and Jennifer Toti, and for the 3H Derrick Eidam and Carly Gieseler. And reporting in we have a clip from top grossing women’s 24h runner Jennifer Bernard, and third woman in length, Angela Legg with 80.64 and 73.92 miles respectively.

Grindstone 100, with 21,424’ gain over 100 miles, comes in 5th on our ranking of Toughest Northeast 100’s (https://trailscollective.com/?p=28754), Grindstone is a beauty. Big ups, runnable terrain, the night start, the great Virginia trails community. Grindstone this year saw 156 finishers with another 73 who either did not start or did not finish. Danny Mathieson took the overall win in 20h 2m with top women’s spot earned by Heather Dougherty in 26:13. I’m thankful for a few clips in this week. The first, will be a clip coming in from a slightly different vantage point, that of a highly achieving sibling who will introduce and be followed by women’s winner Heather Dougherty. Heather who takes us through running out of better things to do on Friday nights, kicking rocks, stupid mountains, and turning that frown upside down for the win. Dana and Heather, thanks so much and congrats to both of you on your respective achievements. Next up, overall 3rd place finisher, the man who’s worn many hats in the VA trail scene, and isn’t slowing down all that much, John Andersen. He’ll take us into what he loves about Grindstone, and what for him is proving to be his “full-proof” recipe for success at Grindstone and 100’s. Also having a solid day out there, 4th place woman on the day, Nelle Fox. Nelle takes us through her first 100 experience, managing heat, cannons, crying and cussing…and the importance of crews. Next up, women’s winner, Heather Dougherty

The Barkley Fall Classic, a 50k (or, give or take 10 miles) ran in the rugged Brushy Mountains of Frozen Head State Park, Tennessee. In intro to the larger Barkley Marathons, the course is complete with rough terrain, a ton of vert, minimal markings, and all that’s needed to sow doubt. With an overall course record of 7:37, it’ll do just that. Here to bring us deeper into the BFC is finisher Sergey Chepishev.

8 Hours at the Brewery 4h / 8h running at the Norbrook Farm Brewery in Colebrook, CT

Rock the Ridge 50m in New Paltz, NY, a runnable gem using the beautiful carriage roads in the Shawangunk Mountains

Conestoga Trail Run’s 26th edition is on deck with 179 entrants registered for this cult technical gem.

Worlds End Fall Classic Half Marathon in Forksville, PA, heading into race weekend with 293 entrants and a beautiful course.

The Big Schloss 50k in Lost City WV, under the VHTRC header…win for name.