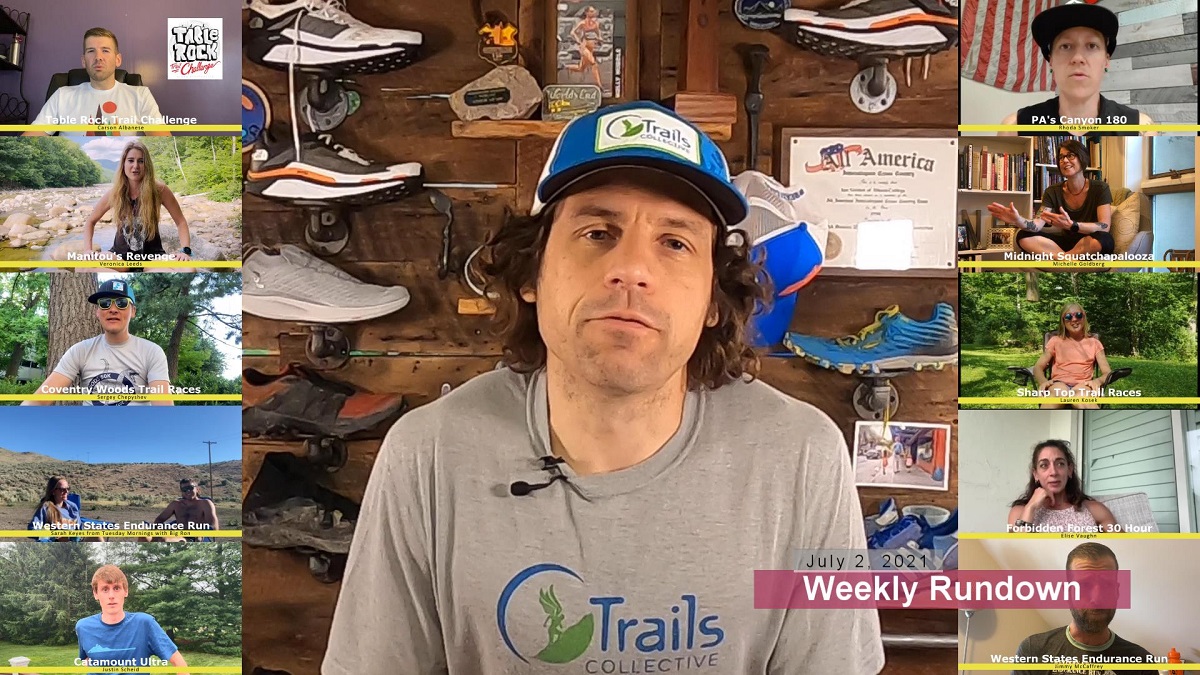 Western States: Women making up 3 in the top 10 and 9 of the top 20. Over a brutal day 67% of the women who started finished, compared to 66% of the men. However, reflecting an opportunity to bring more women into filling the ranks women only comprised 30% of the field. Clips from Sarah Keyes and Jimmy McCaffrey

Also, one of the most amazing hours for many, the Golden Hour…that last 60 minutes ahead of the cutoff. Jamily Coury assembled a great video wherein he challenges you not to get emotional of that golden hour.

Kanyon Kids Trail Race is a free event for kids 12 and under to come and meet friends, make new ones, and have some fun. Tyoga Running Club is offering this experience to give back to the community and to introduce young individuals into the rewarding sport of trail running. The course is a 5K loop with over 750ft of elevation gain which will make it interesting for all and challenging for some. The trail has two small stream crossings where you may or may not get your feet wet depending on the weather leading up to race day. So, get off the kouch and take part in the adventure!

3.1 Mile Race up Mt. Washington along the Cog / Rail Line. Course purported to offer over 1k gain per mile over the 5k.

Rhoda Smoker – In a route dubbed the PA Canyon 180, Rhoda covered 180 miles running the West Rim, Pine Creek Rail Trail, Black Forest Trail, and two sections of the mid-state, covering that beautiful beast of a route in 53 hours 10 minutes. Rhoda weighs in with a voice from the collective clip in the video Rundown above.

No results yet posted.

No results yet listed

This sounds like a pretty sweet event. The race runs on a full moon night, and runs up to the Massanutten Ski Slope Overlook, gaining about 1000’ in under 4 miles, before bombing back down a gravel fire road to the finish. In the 5 mile, of 20 finishers David Downing took the win in 46:09. And, in Shirley’s Popcorn Kids mile, open to kids 12 and under, Boston Lotts, age 7, took the win in 7:24. Boston, taking that win as nearly as solid as your name, well done buddy!

Night Train 50k and Half in Farmville, VA

This is also a pretty sweet sounding event. Starting at 5:30 pm, the course stats and finishes in historic Farmville, VA and cuts through a countryside steeped in some of the last battles of the Civil War. Of 113 finishers in the 50k, Nick Cruz took the overall win in 3:43 with Alicia Rider top female in 4:23. In the Half Marathon, of 113 finishers, Mary Sketch took the overall win in 1:28, with Paul Rhodes in second as top male in 1:34. It should be noted that Night Train one-upped Western States with 4 women in the top 10 of both distances.

A rolling trail marathon along the Taskinas Creek in Williamsburg, limited to 100 entrants. For the inaugural win was Steve Speirs in 3:35 with top female and third overall to Sarah Sanchez in 3:47.

Of 75 finishers, Daniel Wiszniewski took the overall win with a solid 124.88 miles, with Elise Vaughn top female with 102.6. As their UltraSignUp page has a long seemingly jumbled singular paragraph without much in the way of course or other intriguing information, I’m going to hand it right over to top female Elise Vaughn to cue us into Forbidden Forest. Elise Vaughn, top female on the day, weighs in as a voice from the Collective.

Another event by the crew at Sassquad Trail Running, the Midnight Squatch made use of a 2.5 mile loop on the Burlington County Fairgrounds, starting at midnight. Of 16 3H finishers, Rafael Almanzar took the win with 17.5 miles. Of 70 in the 6H, Chase Smith secured the most miles with 40. And of 49 in the 12H, it was Jarred Parrett securing the overall win with 60 miles. To take us a bit deeper, finisher Michelle Goldberg in a voice from the Collective clip.

Table Rock makes use of a 1.2 mile loop course of a mix of dirt, gravel and about 55’ of elevation gain. Of 74 starters, Ithaca’s Carson Albanese was last person standing with 42 miles in. The tough Laura Kline was last female standing in 5th overall with 31.2 miles. Taking us through the format and day is the Last Person Standing, Carson Albanese.

Sharp Top makes use of the Old Loggers Path, the 50k covering the entirety of the 27 mile loop. If the sweet trail and community aren’t enough, you get the bonus of the Logger’s Path starting from the ghost town of Masten, PA.

The 50k had 54 finishers with Andrew Simpson taking the overall spot in 4:34. The race for second looked tight with Reagan McCoy edging Eric Wolfgang by only 40 seconds, and with Michelle Benshoff in for the women’s win in 5:45. In the 25k, of 62 finishers, Marc Frymer took the win in 2:28, but first women, the speedie Katie Sick was on his heels in 2:31. what was maybe most remarkable was that there were 4 kids 12 and under. In that mix, top young studdess, Lauren Kosek in our voices from the Collective clip.

Starting and finishing at the Trapp Family Lodge outside of Stowe, Catamount is a beautiful New England course running a course of predominately wide hard-packed dirt trail. In the 25k Justin Scheid took the overall win amongst of a field of over 250 finishers, in 1:41 with Alayna Sonnesyn on top for women in 1:52. In the 50k, Eric LiPuma edged out Justin Scheid by a mere 16 seconds for the overall win in 3:43 with Madaileine Kingsbury the women in 4:57, and in a field that saw 169 finishers. With over 400 entrants, that’s a solid return for Vermont trail events. Nice work to that crew. In our voice from the Collective, Justin Scheid takes us through his two days at Catamount.

One of if not the toughest 50 mile in the country…probably one of the toughest 100k’s by comparison, Manitou’s Revenge covers 54 signature tough and beautiful miles in point to point fashion through the Catskill Mountains. Running most of the Escarpment Course and the Devil’s Path, plus a bit more to connect and after, and with 15,000’ of climbing, much of it very technical, the course is no joke. Of 75 finishers, Daniel Grip took the overall win 10:58, 5th fastest time on the course, with Veronica Leeds top female on the day in 14:11.

Catoctin 50k and Half Cat in Frederick, MD

A Race for the Future 24H in Pownal, ME

The Might Mosquito 99 Miler & Relay in Honeoye Falls, NY