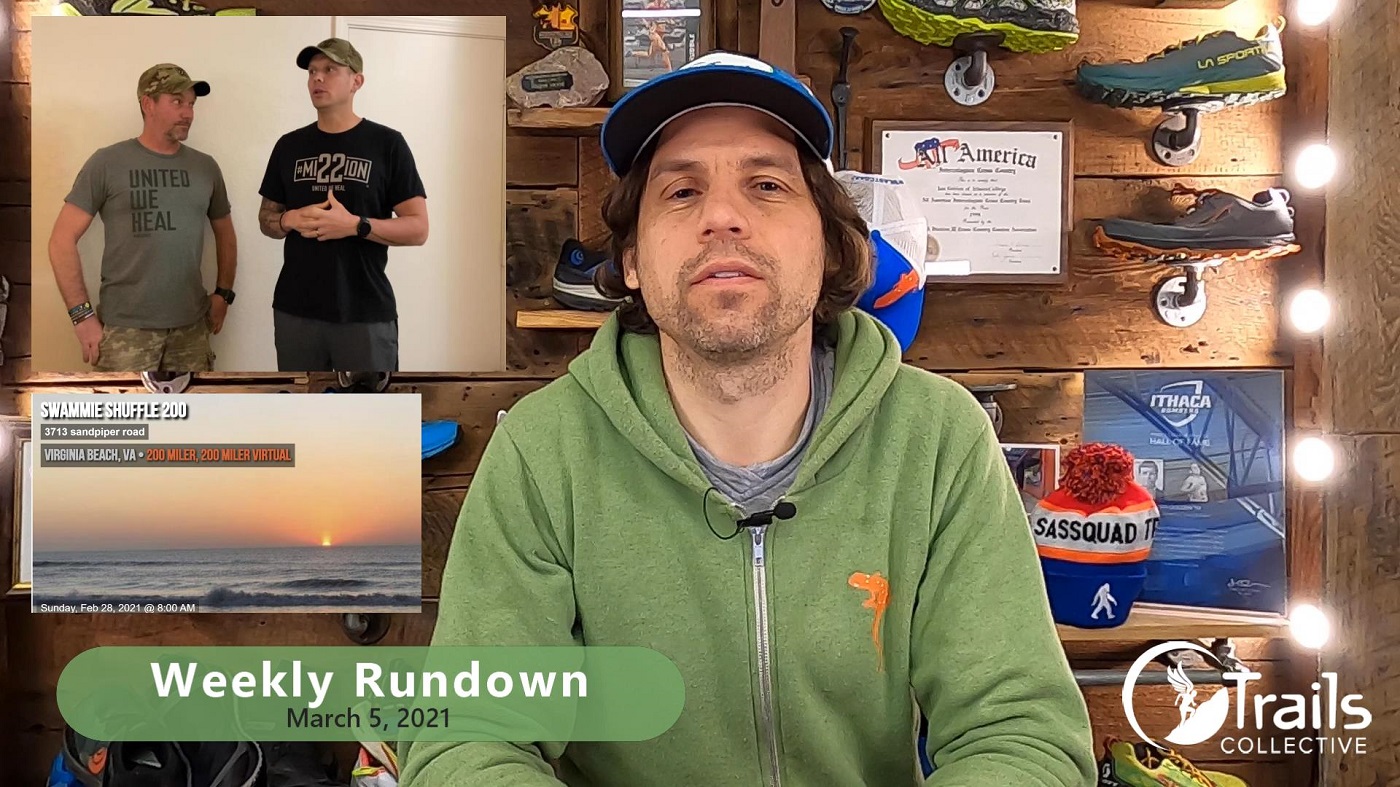 In this week’s TC Live Interview series I connected with Six03 Racing’s Tom Hooper. He’s been increasingly going big on plugging into the northeast scene, directing events such as the Kismet Cliff Run and Ragged in NH, as well as taking over for the mountain classic Loon Race.

The 200 milers are currently running along the Virginia Beach area. The Shuffle is in commemoration of Dustin “Swammie” Lang became one of the 22 American veterans that lose the battle to post traumatic stress and depression. It’s also an opportunity to raise awareness of Mission 22 which seeks to provide opportunities for veterans and families before the battle is lost. The organizers were able to check in with us for the update in the video Rundown.

Erin Festerman, 9:49 for the first known female single shot crossing of Assateague from north to south. That’s 37.5 miles of sand…which, oy, sounds wicked tough. As we mentioned prior, this route gains in coolness in that it starts with a kayaking crossing.

Torey Brooks, 2h 16m for the 11.7 mile Pawtuckaway State Park 3 Peaks which are the remnants of a volcano from over 100 million years ago. This is an opening unsupported female mark.

Ariana Riccio, 5 laps in 5h 52m of the Central Park Loop Challenge, a female supported mark. I am curious what being supported for a Central Park loop entails…is it just watching your stuff?

King of the Mountain

The King of The Mountain course is a single track, one mile course straight up Liberty Mountain’s Snowplex in Lynchburg, VA. The race will start at Snowflex following Falwell Road, and the finish will be located at the very top of Snowflex. With 1,000 feet of elevation change, it will be sure to get your blood pumping! What a way to finish the Liberty Mountain Trail Series! 100 spots left with registration here.

Mid-Maryland Trail Festival 50k in Elkridge, MD, registration still live and a steal at only $29

The Bel Monte Endurance Runs (25k, 50k, 50 mile) take place on the most beautiful trails in the George Washington National Forest in the Blue Ridge Mountains of Virginia. BMER is the best spring mountain ultra in the east. The course is 95% single track trails and mountain roads and has 6,500 feet of gain for the 50M, 3,100 feet for the 50K and 2,100 for the 25K. Join us for the post- race party at Royal Oaks Resort with music and a bonfire all day long! The most beautiful trails and most fun you’ll ever have!

Montvale 5 and 8.4 milers slated to run in Montvale, VA. Registration open at here.

A sweet VHTRC springtime option running around Fort Valley, VA. A rocky, technical 50 km near the northern end of the Massanutten range. Named for nearby Elizabeth Furnace, one of four iron blast furnaces operated in Fort Valley during the 19th Century.

No Man’s is an Athletics Equation women’s production with 5k, 11m, & 25k options slated to run in Prince William Forest Park in VA. It’s a trail running endurance challenge for Women!  Hence the name: No Man’s 50K Challenge.  Okay, it is a slight play on words. Men, husbands, boyfriends, children, family and significant others will be part of the challenge, just not in a running capacity.

On this run, you will experience some of Montgomery County, Maryland’s finest single-track trails meandering along the beautiful Seneca Creek in Seneca State Park.  This scenic trail is muddy, rocky, rooty, hilly and steep in sections with no major elevation gain/loss. This is a challenging but beautiful run for all! Registration open until March 10th.

A 10k Trail race slated to run in Richboro, PA

Come squatch 5.5 miles or 11 miles on March 14th in Mahwah, NJ w/ the Sassquad crew. An event which also proudly supports our friends at the New York-New Jersey Trail Conference with this event! As always, our trail parties are open to runners and hikers of all ages and paces! Registration live here:

Another great Virginia option and early season 50k and half showcasing the beautiful and technical trails of the Blue Ridge Mountains.

A 6 Hr event running over a 5 mile loop along the shores of the beautiful Chesapeake Bay in Lusby, MD.

Virginia Adventures Dogwood Ultras offer 10 mile, 12 Hour, 12 Hour Night, and 24 Hour options. Literally only a handful of spots left for a field a bit over 100.