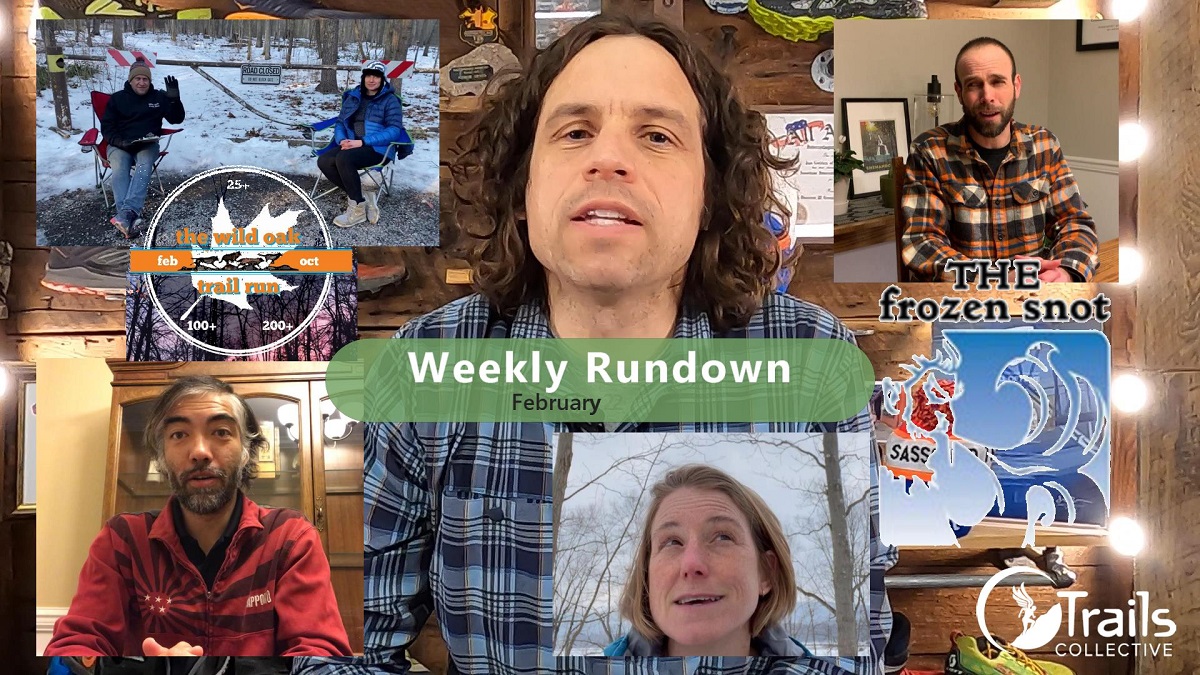 Big thanks to Craig Bernier of Highland Lakes, NJ, and Paige Twining of Ithaca, NY, who have joined recently on the Patreon support front. I can’t thank you enough for stepping up to support making the Trails Collective a sustainable entity, and, even more, for doubling down on being part of the family which is our regional trail community. For those of you up for supporting us via Patreon, check it out here.

This week on the Gear Review front I published the written review of Topo Athletic’s Ultraventure 2, and am looking forward to a bit of snowmelt to get non-snow miles into the Salomon Cross Pro in the current testing rotation.

Upcoming next Tuesday for the TC Live Interview series I’ll be connecting with Six03 Racing’s Tom Hooper. He’s been increasingly going big on plugging into the northeast scene, directing events such as the Kismet Cliff Run and Ragged in NH, as well as taking over for the mountain classic Loon Race. Join us next Tuesday evening.

Spring on the Trails Endurance Runs 3 hour, set for March 28th in Lagrangeville, NY is 88% Full.

Grayson Highlands, a beautiful race running on May 1 – 2nd in Mouth Of Wilson, VA is 99.5% full with only 3 spots remaining for the 50 mile distance. Chances are it will have closed out by the time I get this edited and live.

The Windsor Castle 10-Hour, slated for June 12th in Smithfield, VA is 99% Full and will be by this weekend.

Run Ragged, a Last Person Standing event slated for May 29th in Berlin, CT is 86% Full. Only 7 slots still remain. Guessing you’d want to get on that now if interested.

Whiteface offers more vertical gain than quite possibly any races in the country.

The Frozen Snot, quite possibly the toughest half marathon trail race in our region, ran in epic conditions. Justin Beatty edged out Brian Hess by just over a minute for the overall 13.5-mile win, and one of my teammate and friends Mendy Gallo holding a 5 minute lead over second place Meira Minard for the women’s win. In the 8.3 mile distance option, Drew Funk took the overall win in convincing fashion, as did Larie Hall for the women’s field. Full results here. I was able to connect with the overall Half winners, Justin and Mendy to give us a sliver of what this year’s Frozen Snot was all about.

And, in what is one of the toughest marathon and up courses in our region and country, given the gain, technicality, and seasonal weather potentials, the TWOT () also went down in Virginia. The motto, “The Wild Oak is Wild Oak. If you have any questions, don’t come”.

Just today as an RD, I had an individual who don’t know, and who was on the waitlist for Cayuga Trails, and actually fairly high up, send me 5 emails saying to remove her from the waitlist with the reasoning that the event was unwelcoming. I have no idea what colored that opinion. Maybe I should have sent an Christmas card, or check in to see how each entrant’s family is doing…but, well, I didn’t.  So, while I’m all about love and kindness, I also have to say their motto is a bit refreshing.

I’d say the conditions were actually pretty ideal given you’ve got to be a glutton for punishment if you’re finding yourself setting off on a TWOT adventure to begin with. I was able to connect with both CO-RD’s Guy and Antoinette, as well as the solo 100+ mile finisher Kevin McCabe.

The Swammie Shuffle 200 will run in Virginia Beach, VA in honor and memory of Dustin “Swammie” Lang became one of the 22 American veterans that lose the battle to post traumatic stress and depression every day. Swammie was a Marine veteran who did three tours to Iraq earning a Purple Heart and a Navy and Marine Corps Commendation Medal.

Mid-Maryland’s Trail Festival will run in Elkridge, MD, registration still live and a steal at only $29.