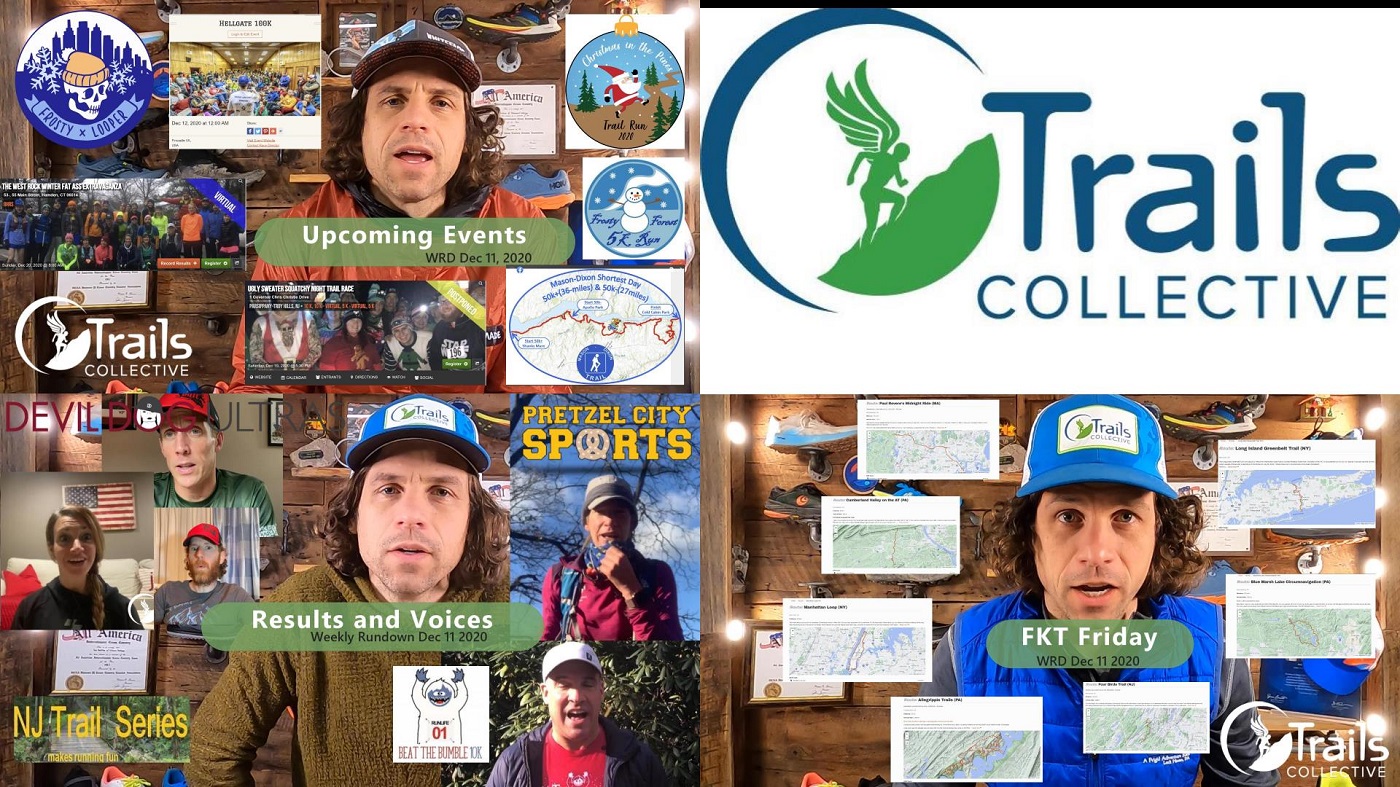 Running on February 6th, offering a 25, 50, and 100 mile distance, in Lockport, NY. Unsure what the field size is, or whether it’s under COVID cap constraints this year, but as of filming there were only 13 spots remaining. https://ultrasignup.com/register.aspx?did=78568

One in the Uber Endurance Sports lineup which capped out early last year, the Boulderfield 100k, 50k, 18 Miler, slated for Saturday, September 11 in Jim Thorpe, PA is open / live: https://ultrasignup.com/register.aspx?did=80460

Devil Dog Ultras, typically a 100k and 100 mile in Prince William Park in Triangle, VA, had to restructure into a limited field sized 50k called the Quarantine Puppy 50k. Of the 69 finishers, overall winner on the day was Alanna Hollborn from Islip Terrace, NY in 4:50, with second place and top male going to Christian Bodewig of DC in 4:53. http://www.devildogultras.com/, results here: https://ultrasignup.com/results_event.aspx?did=79964

Voices: Plugging in on the voices front is overall event winner Alanna Hollborn, Pat Early, co-founder of one of the tastier sounding running clubs in the entire world, and 4th place overall and 2nd male Michael Crossin.

Beat the Bumble, a 10k put on by Run Life Events at the Watchung Reservation in Mountainside, NJ ran a modified-format two days of 10k’s. Breaking it down including top spots with a bit of video in the mix is Wayne Pacconi.

Campgaw Fall Series #3 – Held at the Campgaw Mountain Reservation in Mahwah, NJ, and put on by the crew at the NJ Trail Series, the third in the series will ran on December 5th. 30 finishers in the Half, 20 in the 10k, and 18 in the 5k. In that mix, Chris Rice took the overall Half Win, edging Chance Parker by a minute in 2:09, with Virginia Westervelt top female on the day in 2:13. Ernie Lathom and Melissa Glynn took the top 10k spots, with Sean Hayes and Suzanne La Burt rounding it out in the 5k. https://runsignup.com/Race/NJ/Mahwah/CampgawFallSeries3

Dirty Bird Trail 15 and 30k, run in French Creek State Park, in Birdsboro, PA put on by the crew at Pretzel City Sports. Of 154 finishers in the 15k, the top male slot went to Brian Wiest of Wallingford in 1:04, with the female win to Anne Marie Everhart of Philly in 1:15. Of 50 finishers in the 30k, the top finisher on the day was Dominic Grillo of Whitehouse Station NJ in 1:13 with the overall #2 and top female going to Lynn Malinak of Bainbridge. We checked in ahead of time with entrant Amanda Edwards who sent in this clip post-30k race.

Frosty Looper 8H, held at Cooper River Park which was one of the remaining in-person holdouts has gone virtual, or rolling to 2021. uses a fast flat 3.75 mile loop with great views of the Philadelphia skyline and water in Pennsauken, NJ. It’s put on by the crew at Endless Endurance.

West Rock Winter Fat Ass Extravaganza 8H, another wonderfully punishing option put on by the crew at Live Loud Running. This round is capped out at 50 entrants but also needed to move to a Virtual format of which you can still register through December 17th: https://www.liveloudrunning.com/event-info/west-rock-winter-extravaganza

Ugly Sweater Squatchy Night Trail Race – 10k, 5k, Parsippany-Troy Hills, NJ put on by the Squatchy crew with awards for Ugly. Event has just been postponed with a follow-up not yet established. Registration open at https://ultrasignup.com/register.aspx?did=80640

Sunrise: 07:24, Sunset: 16:44, Challenge Time: 9h 20m. 50k+ distance (36 miles) starts at Shank’s Mare Outfitters in Wrightsville, PA. 50k- (27 miles) starts at Shenks Ferry Road (Appolo Park lot) in Brogue, PA. Both events start at sunrise (you need to be in one of the official start location photos), finish at Cold Cabin Park in Delta, PA, and with the goal of beating sunset.

Naked Nick 25k / 50k, running at Blue Marsh in Leesport, PA, another gem put on the great community which is Uber Endurance Sports. Classic trail events at classic race fees. 25k is only $35 duckets, the 50k, only 39. Similar to that Bumble event…if you were hoping to get your Naked Nick on surrounded by friends this year, you’re also outta luck and should have followed by advice last week. Now you’re just gonna have to show up at a random person name Nick’s house, and when his spouse answers the door, you have to ask her if Naked Nick is home, then wink.  http://ultrasignup.com/register.aspx?did=77795

Richie Rodriguez, 2h 55m for Paul Revere’s Midnight Ride. A 17.4 mile urban running route for history buffs, covering the route Paul Revere rode the evening of April 18, 1775. If not already, it really seems that Boston should put this on as a formal event each year, or at least on April 18, 2025. Richie’s is a first men’s unsupported mark.

Justin Kousky, continuing his FKT rampage of 2020, with a 3h 32m for the 18 mile Four Birds Trail, shaving 2 minutes off the prior mark from only 10 days ago. At that point, I guess it made sense to just keep going for the return and Out/Back mark in 7h 30m.

Jenny Grimshaw, 3h 56m for the Manhattan Loop, a 50km urban gem getting some love this year. Jenny’s time lowers the women’s supported mark by 13 minutes.

Brian Campbell, 8h 17m 34s for a male unsupported out & back on the Cumberland Valley on the AT

Kerry Johnson, 8h 17m 31s for a women’s supported mark on the Cumberland Valley on the AT

Aaron Meier, in a clear effort to get a leg up for the 2021 running of the Naked Bavarian race, ran a 2h 50m for the Blush Marsh Lake Circumnavigation, lowering Matthew Brophy’s mark from April by a stout 39 minutes. Clayton Bouchard, 5h 17m for a 31 mile circuit of the Allegrippis Trails, a baseline mark. Fitting with Clayton, his route description mentions that “a few years ago the signage was very good, but now the local porcupines have eaten a lot of the signs”.