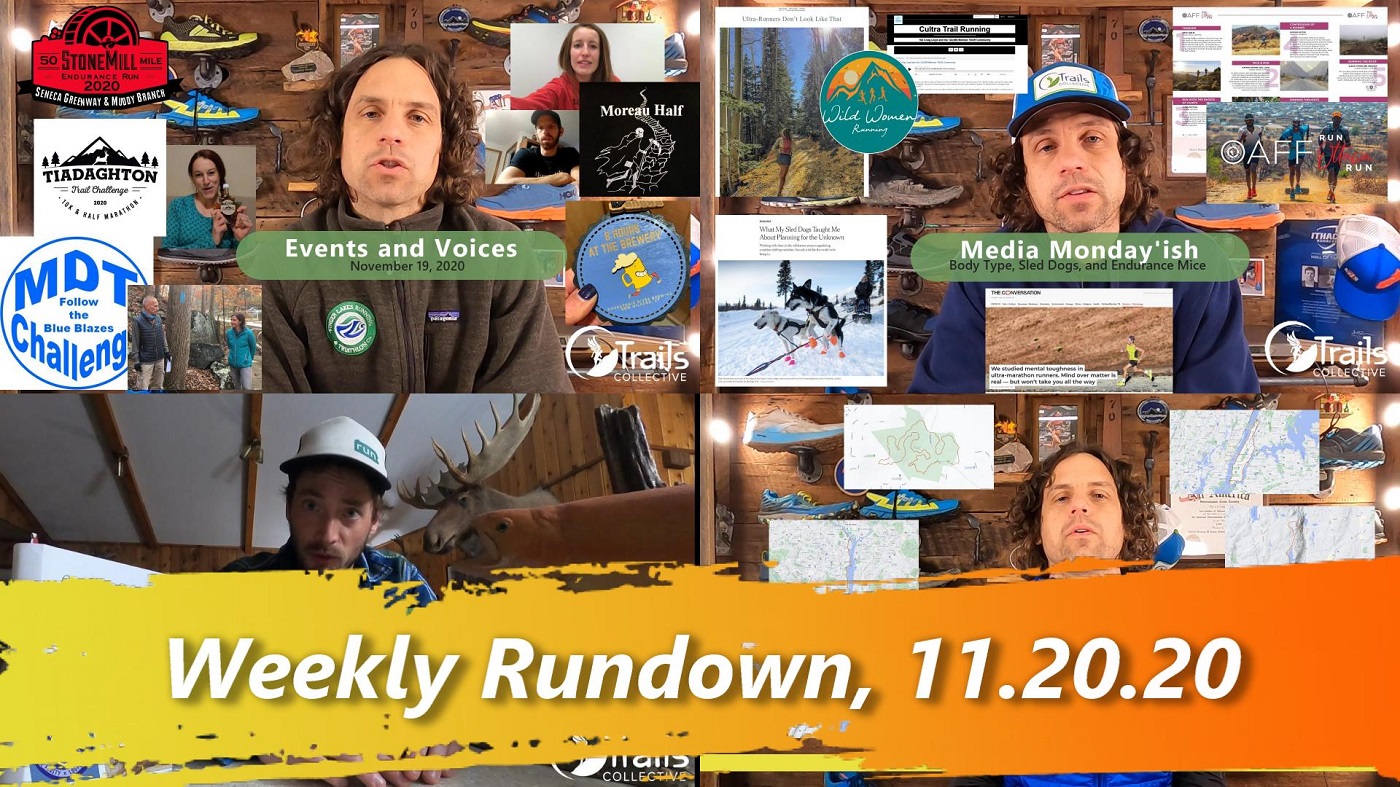 The Week in the Regional Trail Running Community

Ellie had the opportunity to connect with Lindsey Weaver. Lindsey finished the 189-mile C&O Canal Towpath run from Cumberland, Md. to Washington, D.C. in 53 hours, a new female FKT. A week before, she ran a 50 mile virtual run. She has completed 5 ultras in 2020 alone. A librarian, Weaver began running only 5 years ago but already has 34 ultra finishes to her name. What’s next for her? What inspires her to keep going? Drop your questions down below or ask during the show!

Episode 102 with Craig Lloyd, an ultra runner living in Utah who heads up the Trail and Ultra Running Facebook Community of 122,000 strong. They get into his Segway into trail, stories of Davey Crocket and into the beast which is the Facebook Group. For me a reminder of the slogan I chose for the Trails Collective which is #ConnectedByTrails.

A team of researchers set out to quantify mental and physical toughness in ultra runners. The title of their report for you to check out is “We Studied Mental Toughness in Ultra Marathon Runners: Mind over matter is real, but won’t take you all the way”.

In their report they indicate: “The elite athletes in our study completed two questionnaires, from which we found mental toughness didn’t seem to predict performance within the group. Thus, we conclude there may be a “threshold” level of mental toughness one must overcome to even be able to prepare for, and compete in, such an event. But beyond this, other psychological, physical and logistical factors appear to have a greater impact on performance.

We also compared our group of ultra-marathon runners to athletes in other sports including hockey, tennis, professional football, high performance male athletics and mixed martial arts. We discovered the runners had significantly higher levels of mental toughness. In terms of which specific characteristics led to greater mental toughness, such as confidence, commitment, personal responsibility or control over one’s thoughts — “self-efficacy” scored high. This refers to an athlete’s belief in their ability to execute a task. For example, whether they believed they could complete the HURT100 distance within the 36-hour cut off time.”

The Body Type of a Trail and Ultra Runner

Wild Women Running published an article titled “Ultra-Runners Don’t Look Like That”. It digs a bit into the reality of a community of mixed body types, with no one defining a trail and ultra runner. Dig in at  https://wildwomenrunning.squarespace.com/adventure-accounts-1/ultra-runners-dont-look-like-that

The Wisdom of Sled Dogs

Linked on Emily Collins Page was a September article posted in the NYT titled “What my sled dogs taught me about planning for the unknown”. Taking an excerpt:

“Sled dogs can run farther, in a shorter time, than almost any other animal. But they only think as far ahead as they can see, hear and smell. They catch the scent of a deer; they see a curve in the trail. It is, in its way, that simple. If the team meets an unexpected challenge, if they come to a steep mountain or take shelter in a storm, they’re better off for their restraint. Because they’re healthy, content; they have what they need, and they have each other. There’s no stronger way to meet the unknown.” It’s a good short read and applicable to the times. Check it out at https://www.nytimes.com/2020/09/23/sports/sled-dogs-mushing-unknowns-planning.html

Looking for a Salaried Trails Job?

The Finger Lakes Trails Conference is in need of a Director of Trail Development. The individual will be tasked with working to bring the various pieces of trail development, management, owner and DEC relations, etc… into an effective unit. For $40-$50k a year, and with the ability of working remotely, there must be an interested trail aficionados out there somewhere?

Taking us from South Africa to the old growth forests of British Columbia, to mice as the greatest endurance animals on the planet, and the depths of our extreme undertakings in trail and ultra. November 16th’s slate of trail running themed films looked wonderful. They’ll have a reply on Friday, November 27th. Check it out!

JFK 50 Mile. The legend. “’21 capped at 1,200 runners”. I’m not sure what the prior caps were but that seems pretty close if not on par, just writing in that it’s now being capped. At 1,200, if you ask me given any intent at COVID mitigations, 1,200 seems a bit large, especially when you’re talking only 3 waves, each with 400 people amassing and starting at once. Washington County has 100 new confirmed cases in the past 3 days, and this is pulling in runners from all over. In any case, as of filming, 14 spots remain in case you wanna try to nab one. Good luck to all those running: https://runsignup.com/Race/MD/Boonsboro/JFK50Mile

“Lace up those old Pumas and take off on an inspiring 11-mile-ish charity run through the City of Brotherly Love, starting at the famous Four Seasons Total Landscaping and finishing up at the lesser-known Four Seasons Hotel (neither institution is affiliated in any way with this nonsense). View the Course Map. Feel free to reverse the course and start at the Hotel and end at Total Landscaping. There are no rules.”

Got a bit too popular in a hurry and went full Virtual.

Devil Dog Ultras, typically a 100k and 100 mile in Prince William Park in Triangle, VA, had to restructure into a limited field sized 50k called the Quarantine Puppy 50k which is capped out. http://www.devildogultras.com/

0 Degree Winter Trail Festival 5M put on by the most excellent crew at #TrailsRoc in Pittsford, NY. Limited COVID field size and capped out, but check it for next year: https://trailsroc.org/wtf/

Beat the Bumble, a 10k put on by Run Life Events at the Watchung Reservation in Mountainside, NJ is still open. Big thanks to Wayne Pacconi for weighing in last week to educate me on the Bumble. It would seem the Bumble should be public knowledge so I’m going to do Wayne a solid and pay forward the edumication. So, listen up The event is now sold out, so if you were hoping to outrun said Bumble this year, you’re crap outta luck. You should have taken me seriously last year when I said get on it now.

Naked Nick 25k / 50k, running at Blue Marsh in Leesport, PA, another gem put on the great community which is Uber Endurance Sports. Classic trail events at classic race fees. 25k is only $35 duckets, the 50k, only 39. Similar to that Bumble event…if you were hoping to get your Naked Nick on surrounded by friends this year, you’re also outta luck and should have followed by advice last week. Now you’re just gonna have to show up at a random person name Nick’s house, and when his spouse answers the door, you have to ask her if Nake Nick is home, then wink.  http://ultrasignup.com/register.aspx?did=77795

Frosty Looper 8H, held at Cooper River Park uses a fast flat 3.75 mile loop with great views of the Philadelphia skyline and water in Pennsauken, NJ. It’s put on by the crew at Endless Endurance and currently has 141 registered, and open until November 30. So get yourself in the hopper for a Frosty Looper campfire mug, beanie, beanie, and 8 hours of glorious punishment at http://ultrasignup.com/register.aspx?did=79108

Frosty Forest 5k, runs in the Roosevelt Forest of Stratford, CT. There’s currently 27 registered but a cap of 50, so if interested, now would be the time: http://ultrasignup.com/register.aspx?did=74464

West Rock Winter Fat Ass Extravaganza 8H, another wonderfully punishing option put on by the crew at Live Loud Running. This round is capped out at 50 entrants but check it out for next year: https://www.liveloudrunning.com/event-info/west-rock-winter-extravaganza

Roundup of Results and Voices

the 11th running, going down on the Seneca Greenway and Muddy Branch trails in Montgomery County MD. The course is rolling and predominately single track with a few stream crossings. They had 167 finishers with Paul Jacobs and Meg Ryan taking the overall men’s and women’s wins. https://stone-mill-50-mile.org/

A free 7 Miler running on the Mason Dixon Trail in Darlington, MD. Event limited to 100. Amos King was the first male in a new course record of 1:00:47, and Andrea Griffith was top female on the day in 1:34:49. Thanks to the MDT Crew for checking in. We’ve got a clip here to tune you in a bit to the event. Keep it on the radar for a nice late season short race for 2021: https://www.facebook.com/MDTChallenge/

Another solid event put on by the crew at Steep Endurance. This round ran at the Husatonic River Brewing Company in New Milford, CT over a one-mile flat trail and grass loop. 8 hour winners were Justin Kousky at 55 miles, and Tessa Mah at 46 miles. For the 4 hour, the first across were Julia Maurer with 26 miles, and Cody Cutler with 31 miles. RD Brian Vanderheiden sent over this clip as a reflection on the day.

An event put on by Mountain Dog Running which ran on the rolling singletrack of the Moreau Lake State Park in Gansevoort NY, Albany’s capital District. Shaun Donegan and Michelle Merlis took the respective men’s and women’s wins. Shaun was able to follow up in time to get us this clip on the day. https://www.facebook.com/MountainDogRunning/ Full results at http://ultrasignup.com/results_event.aspx?did=79649

Run in the Pine Creek Valley of PA using an absolutely beautiful sounding course. It’s an event that was created as a memorial and to bring the Tiagaghton Trail back to fruition. The course description is as follows: “The course will take runners on technical, rocky and moss covered trails with heart breaking climbs and quad busting descents. Amazing scenery will include vistas, dark hemlock and oak forest areas, trout streams and small cascading waterfalls.” Nice! Overall winners were Jeff Ruhl and Meira Minard in the Half, Justin Beatty and Julie Pentico in the 10k. I reached out to #3 male Bob Bauer, #1 female Meira Minard, and #2 female Capri May, all in the half. Capri (with a little help from friend Nick Ruiz) was able to follow up in time, and I’ll plug the others if they come in post-filming.

Also, outside of racing events, I also want to give you the update on Shan’s Cross Country effort:

Debbie Livingston picking up two in one day with a 1h 5m on the Tunxis Trail’s South Trail in One-Way format, a baseline mark, and the 2.5 mile Finch Brook Trail in 24m 49s, a gain of over two minutes from the previous mark set in May of this year. A historical note on the Finch Brook Trail indicates that Abraham Lincoln once walked the forests of that network. Hopefully Debbie had an overwhelming sense of honesty in that 24 miles, and an impulse to pickup a top-hat for the occasion.

Daniel Bannon, 1h 14m for the 10.3-mile scenic West Side Trail. This one’s had some action this year, this being the third mark for the male unsupported category, and lowering the time by another 4 minutes.

Marisa Cummings covered the 18 mile Mount Vernon Trail in 2h 15m, a baseline supported women’s mark. This a route that Wardian first submitted, and which he describes as passing major sights including Iwo Jima, the Washington Monument, the Capitol, Key Bridge, Mount Vernon, and Olde Town Alexandria. That all sounds pretty sweet and an excellent route for anyone to head out for.

Dan’s set 12 on the year, with 4 set in October alone, in one case with a big back to back weekend. Marks have included the MA’s Appalachian Trail, Circum Quabbin, Mount Toby and Mohawk Trail, and quintessential Connecticut staples including the 100km Metacomet and Nipmuck, and several others. We single Dan out here as somehow, given the timing of posts and odd glitches on the FKT.com site, we’ve missed all but one or two. I do my best, but my sincerest apologies to anyone else who I might be missing along the way!