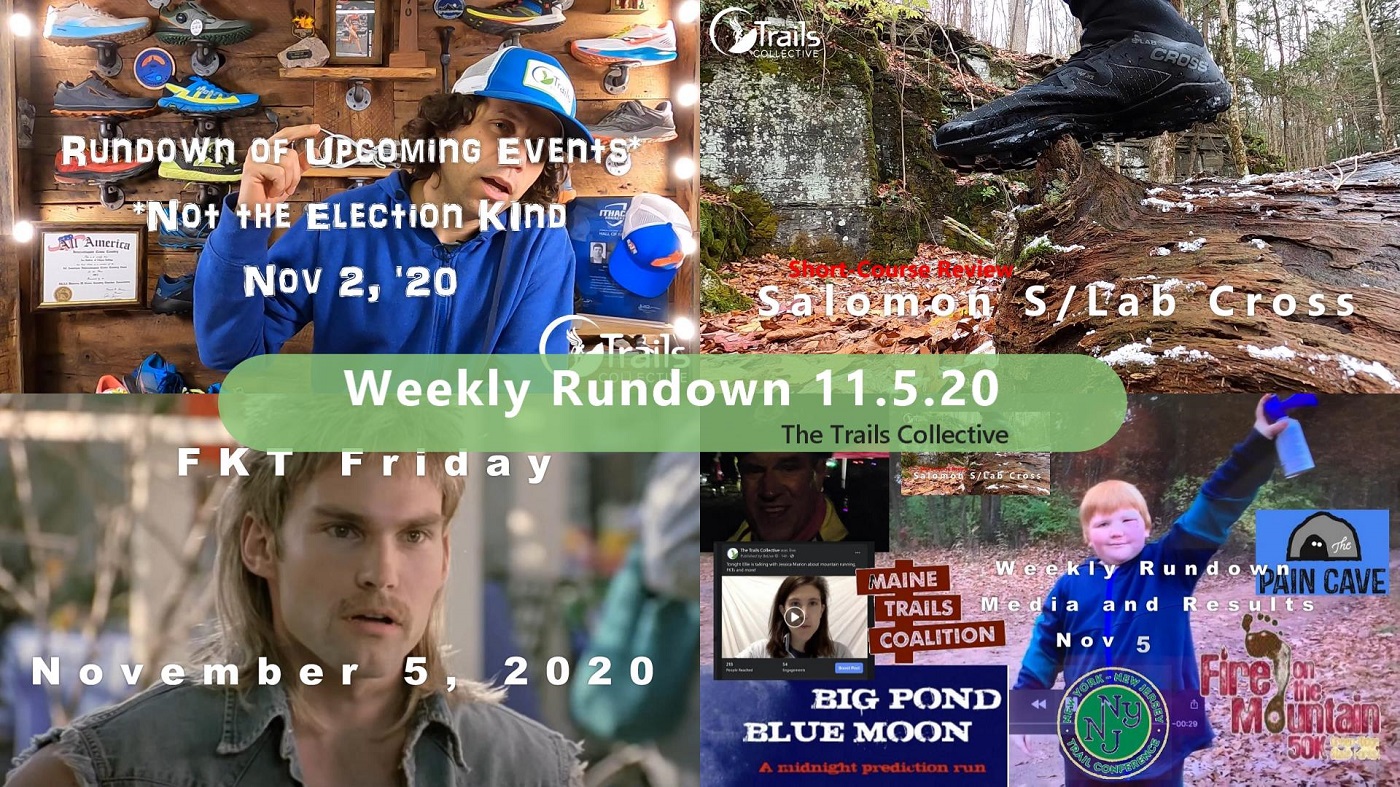 This was our first week shifting the format to segmenting out the Weekly Rundown into multiple 10’ish minute episodes. Our hope is to make it more accessible and fitting into the Collective’s daily commute openings. We’ll lay it out here into this past Monday’s Upcoming Events, Wednesday’s Gear Review, Thursday’s Results and media recap, and finishing off with today’s FKT Friday. We hope you enjoy the new format and we’ll see if we can sustain it!

Rim to River should be a beautiful 100 in the New River Gorge of WV. Proceeds will benefit Adventure Appalachia which is an entity that facilitates empowering, educational outdoor adventure experiences for adolescents and adults. These activities encourage a sense of self-worth and empowerment, foster respect, understanding, and care of the natural world, and exemplify the importance of communication, teamwork, and leadership. There are 201 entrants in the capped lineup. This is a first-year event so to be seen how the course runs and how the field shakes out. Good luck to all setting off on this awesome looking inaugural event.

The Hamsterwheel is a timed Event, put on by Just Keep Running – Hillsborough County Fairgrounds in NH. A gentle 4 mile loop used for 6hr, 12h, 24h, and 30h events including Relays. Field size was reduced to 175 and capped out. http://ultrasignup.com/register.aspx?did=72739

Starting just after sundown at 6:30 in Cromwell Valley Park in Baltimore, 6’ish miles including some fast single track, rolling hills, and a fast downhill finish. https://ultrasignup.com/register.aspx?did=80060

Tuckahoe is put on by the Centreville Crushers and Algonquin Ultras, in Queen Anne, MD. A good rolling course and middle distance for first timers or those who want to run fast. Registration closed on November 1st with 238 entrants in the field. Keep it on your radar for a good late season race for 2021 and stay tuned for a rundown from Trent and the Algonquin crew post race. http://ultrasignup.com/register.aspx?did=73430

The Bobcat 11 Mile runs in Cunningham State Park using the Catoctin and Cat Rock Trails. Registration is still open through today, November 4th at https://ultrasignup.com/register.aspx?did=72778 but COVID limited to 55 entrants so get on it now.

The Dirt Monster is a Cross Country race in North Park near Pittsburgh. Reg is closed with no raceday on this year of COVID, but you can hop on the waitlist last minute if interested: https://www.trailracesnearpittsburgh.org/registration

Cross County Trail Marathon and Half

The Cross County Trail Marathon and half are put on by the crew at Atlis Endurance Sports in Springfield, VA. Trail is 75% paved, 25% dirt/gravel. Registration still live with 110 split between the distances. Want to run a non-technical and quick half or full get on it at https://ultrasignup.com/entrants_event.aspx?did=74762

The Stone Mill is a 50 mile event going down on the Seneca Greenway and Muddy Branch trails in Montgomery County MD. The course is rolling and predominately single track with a  few stream crossings. It’ll be an RRCA National Championship event in ’21 so preview it a couple weeks and throw down in ’21. Per permitting, register now in wait-list format, and the final go pulls you in. https://stone-mill-50-mile.org/

The Bold Coast Bash will be going down in Pownal Maine next weekend. With 10, 20, and 30 mile options run using a beautiful 10 mile loop, half in the woods, half along Maine’s northeastern most coastline. I was slated to be in the lineup but COVID quarantine and testing requirements for both Maine and New York have made it not too feasible. I’ll have to wait to 2021 to join the mix over this beautiful event.

The legend. ’21 capped at 1,200 runners…which, if you ask me given any intent at COVID mitigations, 1,200 seems a bit large. Midaswell go all in at that point. In any case, as of filming, 23 spots remain: https://runsignup.com/Race/MD/Boonsboro/JFK50Mile

The Hex Hollow Half, run in Spring Valley Park in York County, PA, offers up roots, rocks, two stream crossings, fast descents and challenging climbs. 13.1 and 6.66 milers are sold out with COVID caps in place at 100 runners per distance. https://ultrasignup.com/register.aspx?did=78465

Review of the Salomon S/Lab Cross (the Short Course)

Review of the Salomon S/Lab Cross (the Long Course)

Dr. Jay Friedman, the Gunk’s Runner’s Pain Cave rolled out episode 71 with Jake Jackson, an individual who has quickly improved to one of the better 24 hour runners in the country, balancing work, family, getting coached, and battling imposter syndrome.

Ellie went live for this week’s TC interview just last night, chatting with stud Jess Marion. Jess is arguably one of the best technical trail and mountain runners around, nabbing FKT’s on iconic routes including the Presi Traverse and Pemi Loop.

The Maine Trails Coalition released their plan for the statewide network of multi-use trails for the next decade, and including 5 big projects. Their asking you to check it out, share, and provide some feedback.

The New York New Jersey Trail Conference wrapped up their 100 Miles for 100 Years Trails Marathon. The event was a huge success. Thanks to all who participated and helped to raise over $45,000 to support the Conference’s mission in building and maintaining an amazing array of trails for us all to use.

Big Pond Blue Moon run in Big Pond PA, an event put on and to support the Troy Rotary Club. A cool format with the event starting at 10:15 for the first waves, and with each subsequent setting off based on their predicted proximity to a midnight finish. The top finishers end up being those who come in closest to midnight. The top two, finishing within the minute after midnight? Brooke Ward of Roaring Branch and Melissa Proseus of Canton. Friend and supporter Jeff Holbrook cued us into this event and was up for providing a few words in the moment, so take it Jeff.

Fire on the Mountain

The Fire on the Mountain 25k and 50k ran in Green Ridge State Forest, Maryland, put on by the Potomac Highlands Distance Club. For 2020 they had an out and back format over predominately single track trail, starting and finishing from the Point Lookout Overlook in the Southeastern edge of Green Ridge State Forest in Western Maryland. We checked in with the event and RD Kevin. Given his history as a reporter prior, he has a pretty great post-race write up which you can check out on their site. He was pretty hammered in schedule this week with work and family but was able to get us over a bit of a rundown on the event.

Scott and Debbie Livingston pairing up for a 58m 29s on the Naugatuck Trail One-Way, throwing down to shave two minutes off the Connor Couple’s time from 2019. That’s fighting words there.

Ben Nephew making the case that he’s not dead yet with a 2h 3m on the Paugussett Trail, nabbing it from this year’s FKT all-star Justin Kousky by just over 2 minutes. Nice work old man!

Emma Reineberg, 10h 31m and Declan Lynch 9h 5m for the 47 mile Montour Trail, a trail with the distinction of being the nation’s longest suburban rail trail.

Kayla Campasino having none of it with a 4h 24m Unsupported time check on the Rock Creek only days later, shaving an hour and a half off Jess Wedel’s time from only a couple weeks ago.

Eric Harbeck, 5h 39m o the Lake Sunapee Circumnavigation, 48 minutes under John Plummer’s mark from only a month ago.

Emily Schwartz, 2 in 2h 13m for the Central Park Loop Challenge which consists of going after a certain number of the 6.1 mile loops in Central Park during park hours.

Richard Ellsworth, 3h 39m on the Finger Lakes Trail’s Letchworth Branch in Unsupported fashion. Not only taking nearly an hour off of the prior mark, but running 8 minutes under Daven Oskvig’s supported mark from August of this year.

Bob Stewart 4h 49m for the John P Saylor Trail, and doubling back with an 8h 42m mark on the Lost Turkey Trail

Stephanie Dannenberg, setting and opening mark of 3h 15m to pick off the Peak of Otter, and inclusive of Sharp Top, Flat Top, and Harkening Hill, an area off the Blue Ridge steeped in some cool history. She then doubled back with the Priest and Three Ridges in 7h 29m. That’s solid fitness.