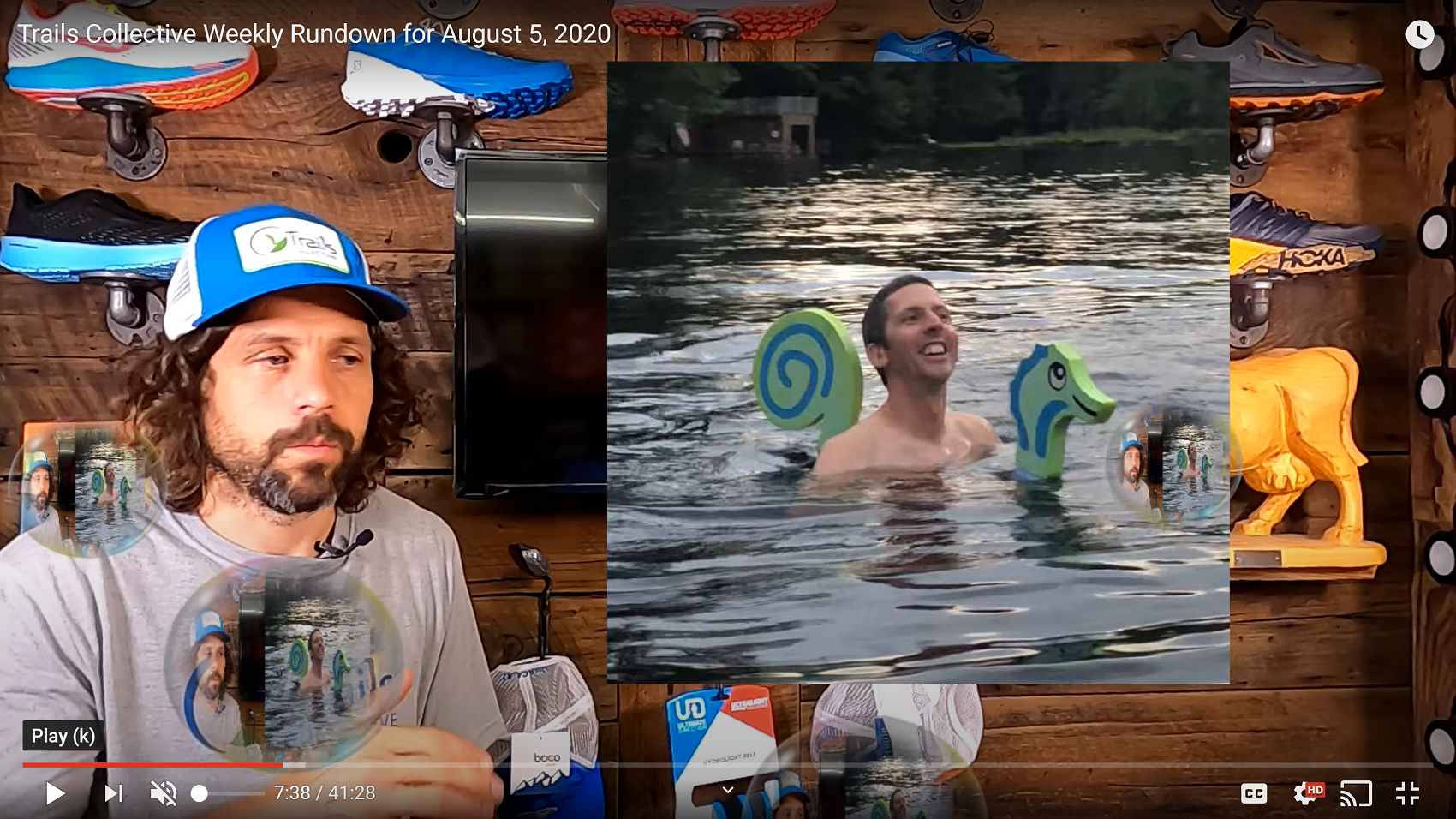 Hope this finds you all hanging in there through the state of things, healthy, and finding time for adventure.

Cracking Open the Box: Saucony’s Endorphin Speed, 7.8 oz 8mm drop TPU plated gem…stacking it next to my first couple runs in the Brooks Hyperion Tempo, a match at 7.3 oz, 8 mm drop and a DNA Flash midsole that I’ve continued to like in the Brooks Catamount Trail shoe which I put in an initial review of a few weeks back. We’ll see how they stack up.

I put a first couple hours into the Ultimate Direction Hydrolight Belt yesterday. Similar to the Hydrolight and Skin shorts which we’ve reviewed here, and which I love, I don’t know that the function of this belt will be quite the same. Dual rear envelope pockets still work well, and the back center enough for nutrition and/or phone, but my first take is that they flap a bit too much in saddlebag fashion when full, only smoothing out once they were a bit down in ounces. I’ll keep running it and report back in.

Ben Nephew and I will still get you a review soon on the VJ Maxx, and teammate Aaron Stredny hopefully will come through this week with a review of the Salomon Sense 4 Pro’s. On that front, for all of you Salomon fans out there, their inventory projections into the fall and winter are pretty bleak. If you’re needing re-ups on the product, get it if and while you can.

Thom Knowles – based in north central New Jersey – the part of Jersey with beautiful hills, lakes, wicked rugged trails, and lots of all of those. A long-time roady, Thom moved into Trails end of ‘18 and hasn’t looked back…picking of 7 burly events in 2019 including Iron Mines and Escarpment. Thom, thanks so much for your support!

Ben Drew – Ben, co-founder and owner of the former Run On Hudson Valley in Croton-On-Hudson NY is a wonderful ambassador for the sport and community. Not only was he at the running specialty helm for years, he’s also directed or Co-Directed events including Breakneck Point and Castle To River. In the past few years he’s built up a site called the Wired Runner, doing an absolute crap-ton of Best-Of product rundown and reviews. Check it out at the WiredRunner.com. Ben, thanks for the support brother!

Cory West – Probably most known for his years as a professional body-builder, an occasional classic photo of him racing next to a waterfall wearing the retro Janji stripes, and in being the most efficient UPS driver on the planet, Cory’s had at some of the classic trail events in our community over the years, being a repeat offender at the Virgil Crest 100, Finger Lakes Fifties, World’s End. Cory was already on board but upped his tier level. Thanks brother!

Although the event was out of our opening region, there were a few runners from within who threw down at Bob’s Big Timber Backyard Ultra this past weekend with Jacob Conrad the last standing after 41 laps and hours. Among our own:

Running as an in-person live event:

Jay made it to the hospital and was diagnosed with a broken ankle in 3 places, as well as soft tissue damage and a torn deltoid (shoulder) from the hard fall. He had a successful but very intensive 4+ hour surgery and is currently resting at home comfortably. He is extremely thankful to all involved especially the West Milford, NJ Search & Rescue Team. Be safe out there your coach, Elizabeth Azze.

In the Pod/Video Cast MEDIA

The gang at Cultra talked with Cindy Sullivan. When Cindy was in middle school, she was forbidden to run- she had a degenerative genetic knee condition that got her out of gym class and physical activity. Fast forward about 20 years and Cindy decides she’s going to run for the most selfless of reasons- to inspire her then three year old son. After running her first trail race, she graduated to ultra and has since gone on to run 50-milers, 100ks and 100 milers as well as multi-day events

Jay and Phil are back in the Pain Cave this week to discuss an actual race! Phil breaks down his race at Vol State, a 500KM race across Tennessee. After listening, this race sounds terrible. However, a few days later Jay and Phil brought the winner, Francesca Muccini in to explain the best way to run the race and most importantly, how to enjoy doing it.

In Trails Collective media, I put out an episode with Jeff Adams discussing his recent 175 mile virtual race with the second Quarantine Backyard Ultra. We also discussed his FKT last September on the Long Path in Upstate NY.

I interviewed two Rochester Runners this past week, Sophie Kotok and Katie Ghidiu. Sophie took us through Cayuga Trails, running barefoot and being a PhD student at RIT in Mathematics. Katie and I discussed running in college at Notre Dame with Molly Huddle, coming back to running after taking a break, getting into Trails and finishing 3rd at Twisted Branch. Look for those in the coming weeks!

This weekend on the Calendar

On the Bacon Trail – The Naylor Mill Trail 7K

We’ll take you out this week with Becky Kosek, breaking down the experience that was Bob’s Backyard this past weekend. Thanks everyone for tuning in this week and we’ll catch you on the next. Take it Becky…