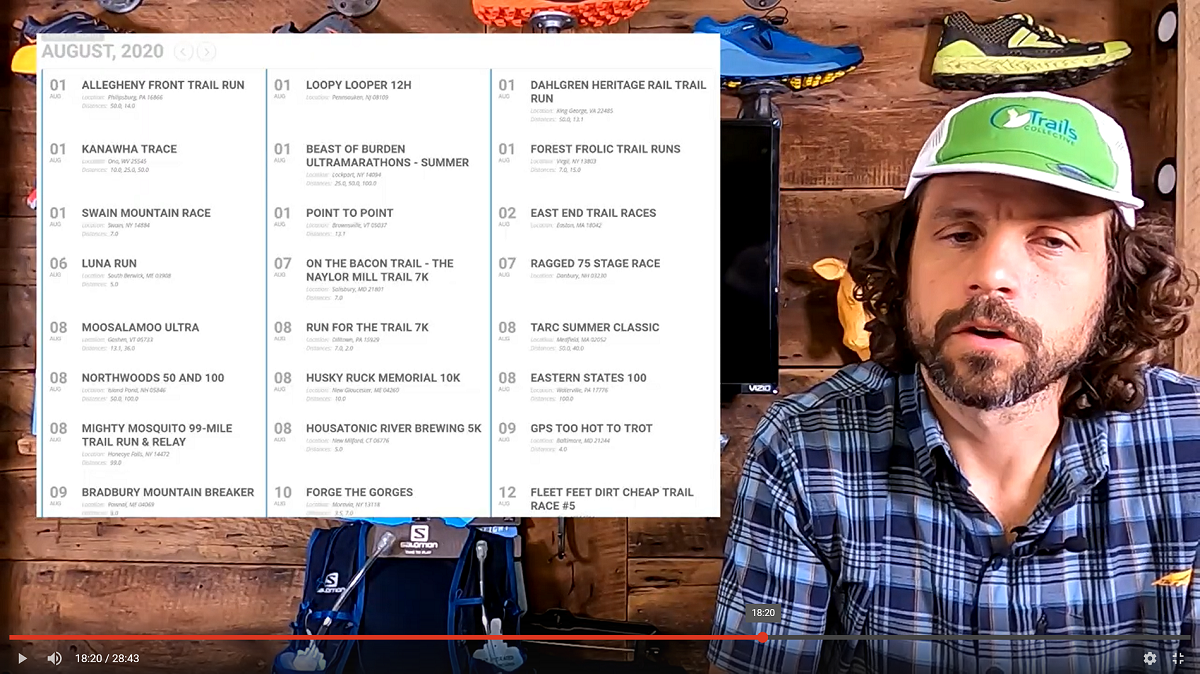 TC Gear is arriving and THANKS to supporters!

Trails Collective gear is arriving, with stickers, Truckers, and mesh duckbill hats, the latter style which I’ve been wearing constantly since it’s been hot. To those awesome individuals who have come on to support making the Trails Collective happen through Patreon Support, some schwag of thanks is almost there. Jeff Holbrook, Cory West, Ron Heerken’s Jr, Grayce Langheine, Eric Kosek, Jay Kelly, Carson Albanese, Jay Durand, Brian and Steep Endurance, Richard Rushka, and the Ice Empress Sayard Tanis. Thank you!! To all those able to support us in making this thing work, thanks in advance. Find us at https://www.patreon.com/join/TrailsCollective

Results this past weekend:

Jug End Loop Ultra in Egremont, MA: 4.2M, 27M, and 6Hr, gone semi-virtual with runners needing to run on the actual course but on their own sometime in July.

Benn Griffin putting in 31.5 hours in just under 6 hours with 4,200 feet of ascent Soapstone Assault in Somers, CT, a gone-virtual event put on by the Shenipsit Striders, with events of the classic 5.5 mile course w/ 1,500 feet of gain, and 6 Hrs to be run between July 25 – Aug 2. Registration: https://ultrasignup.com/register.aspx?did=75588. Pretty slick awards crafted by Ragged Cuts out of Connecticut.

FKT’s continue to rise in awareness with a segment on NPR this week: https://www.npr.org/2020/07/24/895191877/alone-in-the-wild-long-distance-endurance-runs-gain-popularity-during-the-pandem

CT: Andrew Burford lowered the mark on the Naugatuck Trail in both the one way version, keeping a steady pace ahead of Ben Ristau’s marks from April, taking 10 minutes off on the way out, and another 10 on the way back.

MA: Iain Ridgway reclaimed his title on the Worcester East-West Trail, covering 23km in 1:57, just under 20 minutes quicker than his opening mark on the segment from May. Grace Long set a mark of 4h 38m on the Cardigan Mtn State Park Loop

NJ: Allison Baca lowered Lauren Longfield’s time for the short but burley Mt Tammany loop to 38m 57s on the 23rd, only to be bested two days later by 3 seconds with Lauren Longfield charging back to keep her title.

PA: Bob Stewart covered the 85 mile Susquehannock Trails System loop in 1d 18h Ben Robinson set a mark of 3h 50m on the absolutely beautiful West Rim Trail which traces high above the Pine Creek Gorge, an opening mark for a supported effort, but 30 minutes under Eric Kosek’s unsupported time from June of this year. Eric Kosek sent the Midstate Trail in record time this past week. An incredible effort, covering the 346 miles in 6 days, 6 hours, ascending over 55,000’. Eric, congrats man…that’s pretty incredible.

Chris at Running Inside Out put out a 4 hour show…yes, four hours, four Rochester trail running OGs and yes, I got through it all. Chris talks with Daven Oskvig (TC interview coming soon!), Mike Welden and Jamie Hobbs, the most fascinating and repeated guests after 4 years of the show.

Speaking of Chris, our podcast, Hamstring and Heartstrings still plans to go ahead full steam. We put out a show last week titled “So much more than zero” discussing running fast from murder hornets and half mile timed trials.

The gang at Cultra missed Becky this week but they talk race strategy, hydration, nutrition, equipment and mental toughness and recount their recent efforts at running 104 Dumbass Miles on the Pequonnock River Trail in lovely Trumbull, CT. Bill Odenhaul special guests and they try to determine who has the FKT (allegedly).

In trails collective media this week Ellie put out an interview with Amelia Kaufman, one of my best friends and a local Ithaca legend.

Events Running in the Weekend Ahead:

An FKT Attempt being run as we’ll be editing and posting this this week: Daven Oskvig going after the 138 mile Northville Placid Trail.

Virtual Beast of Burden Summer Ultra, Lockport, NY “GIMME SHELTER 2020 Beast of Burden Ultramarathon”, entrants running where they wish between September 19 and 27 with runners needing to complete the 25/50 or 100 miles under the cutoff times for buckles or medals by mail. https://ultrasignup.com/register.aspx?did=70468

Point to Point, Brownsville, VT Moved to Virtual: entrants to to ride or run a course of their choosing, share online, and still help in raising funds to support Vermonters via the Foodbank https://www.thepointtopoint.org/

Next weekend on the Calendar:

On the Bacon Trail – The Naylor Mill Trail 7K. https://ultrasignup.com/register.aspx?did=72297