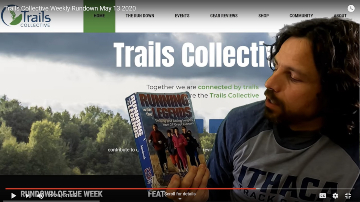 Coming to you in this week’s Run Down, serving up a full plate of regional trail goodness including:

On the Facebook Boards: VHTRC: An AJW Taproom iRF article on MMT as a Classic Ultra https://www.irunfar.com/2020/05/class…

On the FKT Boards:

In PA Buzzards Mountain Marathon took the focus this past weekend w/ a solid women’s mark set, and a solid men’s record lowered by a hair. For the women’s mark, Katie O’Regan established the benchark for the 25+ mile course with over 5k feet of gain in 4:08. Michael Heimes, after restarting after getting lost in mile one, shave just over a minute off of local legend James Blandford’s time from earlier in the year, finishing in 3:52.

In CT the Aspetuck Trail, a 12 mile segment with 1,000 feet of gain, has been one of the more active in our region this year on the FKT front. It saw both the women’s and men’s times lowered yet again. Elizabeth Campbell dropped the women’s to 1:52, and Tucker Grose, the men’s to 1:37. The Livingston’s through down on the 18 mile Nautchaug Trail as a couple with Debbie posting the baseline women’s unsupported mark at 2:59, and Scott chipping away at an only 3 week old mark by 7 minutes to 2:39.

In Maine, Nicolas Cornell lowered the mark on the 9 mile Androscoggen Riverlands State Park route to 1:17.

In Massachusetts Ryan Williams lowers the marks set by Iain Ridgway and Ben Nephew just weeks ago on the Monoosnoc Ridge Trail.

In NY Scott Gregor established a new mark for the Lake George 12ster in 13 hours 11 minutes. The route covers 40 miles over 12 peaks with over 9,000 feet of gain.

In NH, the trail season is kicking in with several marks. Dan Grip roared back from a solid effort only a week ago to set a new unsupported mark of 8:24 on the Wantastiquet-Manadnock Trail. Eric Harbek set the men’s unsupported mark of 10:48 over the 58 mile Northern Trail Trail. Ryan Kempson lowered the mark on an original Ben Nephew tight and and beautiful Monadnock Double Triple and Quad Traverse to 2:09.

In Virginia Ryan Pelletier a virgin mark on the 25km Mills Creek – Turkey Pen route in 3:42.

Connecticut Trail Ultra – Taking a book from Ten Junk Miles, CULTRA put out multiple podcasts this week with members of their community. The first is a long form interview with me, so if you haven’t heard me talk enough, this goes even deeper. It’s raw, honest and I felt heard.

Pain Cave – The Best Running Books Jay is joined by his great friend, coach and author Joe Puleo to go through their favorite books about running. A two-part episode, they cover their favorite biographies, memoirs, science/training books, and running fiction. I think they might have stolen this idea from Chris and I but of course, did a much deeper dive. A few now on my list: Dual in the Sun, Running with the Buffaloes, Pre

Hamstrings and Heartstrings – Chris and I discussed our worst running decisions…with some Nicholas Cage thrown in for good measure. I speak about running races for the wrong reason and Chris speaks about doing things (or not doing things) that prevent him from not getting out the door.

Running Inside Out – Chris has prefered to podcast with me (who can blame him) so his long awaited interview with Run the Desert came out last night, and I’ve yet to listen.

Trail Running Film Festival There will be another Film festival on June 6th! Start popping the corn and get your tickets now!

Weskey Atkinson: Easten States 100 champion I interviewed Wesley a week or so ago to dig deeper into his ultra journey and wins at Hyner, Worlds End 100k and Eastern States.

Coaches Corner with Jay Friedman! He’ll take you through a bit of the physiological metrics that are critical to your capacity, and training in this short video

Coming up this week:

May 16th: Cole Crosby back at it, looking for an FKT on New Jersey’s 77 mile D&R Canal Towpath w/ funds going towards the NJ Pandemic Relief Fund. Look him up and follow his strava beacon.

May 24th: Ryan Williams’ Ramshackle Running “Solo 6”. 5k loop starting and ending at your door. The event is totally free and the winners get giant cookies from Christo’s Wicked Good Cookies. There’s a detailed description and Google Form “registration” on his blog www.ramshacklerunning.com/solo-6.

May 25th (and the week after): The Hudson Valley’s Steve Estremera’s Conquer the World Virtual Ultras with 50, 100, and 100m options in one shot, or over 7 days. Register here up until May 24th: https://ultrasignup.com/register.aspx…

This (and each) Wednesday at 8:00 – Trail Trivia with Aaron Stredny streaming live on the Trails Collective Facebook page.